Varda by Agnès, the final film by Agnès Varda, starts as a filmed masterclass. Varda sits before a rapt crowd and begins speaking of her work, her worldview, her creative approach, and her life. For an artist, life and work are inextricable; raw material informing refined ideas becoming more raw material. The crowd is both receptive and appreciative, as most masterclass crowds would be, while the legendary filmmaker talks about what it is to be a woman who makes art by any means and any method.

Yet Varda by Agnès playfully breaks form. Amid clips from Varda’s films and lectures, we see Varda address the film audience watching the movie, in a way that would not happen in a masterclass setting. We see Varda in different places, with different people, in different stages in her life. And, if you love Varda’s work, you wind up missing her more and more as the movie drifts toward its understated yet poignant close.

Rosalie Varda (daughter of Agnès and Antoine Bourseiller) introduced the movie at the New York Film Festival (NYFF). She spoke of Varda by Agnès as a type of conversation. I’ve been thinking about that notion for the last few weeks. There is a back and forth between past-Varda and then-present Varda, and there is a sense of conversation between the mediums she worked in, and yet the film feels more like a monologue or a recitation. But even that playfully breaks form in my head, calling attention to conversations we wish we could have with Agnès Varda if she were still alive.

Varda mentions the three guiding principles behind her creative work: inspiration, création, partage (inspiration, creation, sharing). On the most basic level, this is the raw material, the making of the finished work, and the ability to give that work to others. There is no sense of a product or commodity in those words. It is about living a creative life and the act of creation (not having created). Sharing (not selling) takes on a few different elements here. Putting a film or some creative work out there is an act of sharing, but so is doing a masterclass or a film lecture. Varda by Agnès, while an exploration of inspiration and création, seems to best exemplify the quality of partage, as if giving the audience little secrets and insights and encouragements.

Varda by Agnès offers not just a glimpse of her life and work, but of the little games she plays in them. While speaking about her excellent 1985 film Vagabond (Sans toit ni loi), for instance, she mentions the film’s multiple tracking shots in which we follow Mona (Sandrine Bonnaire). I’m sure I noticed these shots before, but Varda explicitly speaks of their uniformity. While doing so, she also recreates a right-to-left tracking shot on screen in the style of Vagabond. It made me wonder if this playful meta-tracking-shot was seen during one of the live masterclasses, or if it exclusive to Varda by Agnès. And I wondered which came first, the tracking-shot about tracking-shots or the lecture about the tracking shots? If anything, that is an oblique, abstract conversation about the interplay an artist can have between different modes of presentation and their respective audiences. 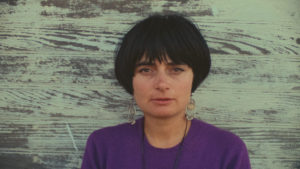 Coming back to this idea of partage, I was struck by her career’s shift after the poor reception of 1995’s One Hundred and One Nights (Les cent et une nuits de Simon Cinéma). Her anecdotes about that film are fond yet sad, with a great bit about working briefly with Robert De Niro. It was the last narrative feature she’d ever make, and the last feature she’d ever shoot on film. Yet she continued to make non-fiction films thanks to consumer-grade handheld cameras, and to make art installations on her own terms and in her own way. A commercial and critical flop led to The Gleaners and I (Les glaneurs et la glaneuse) and a focus on visual/video art and eventually Faces Places (Visages villages). What a gift of an idea—just because one avenue of expression is closed doesn’t mean you can’t explore others however you’d like. There are many ways to lead a fulfilling creative life, and many mediums available (photography, moving images, art objects interacting with different spaces), that explore your obsessions in the world.

Varda is so warm and affable any time she appears on screen. What’s caught on camera is more than any featurette or audio commentary can convey. It is the joy of watching an artist who has persisted in making her art, who also wants you to make something, and to know that it is possible. The appeal of the masterclass is this idea that you’ll learn something that will help your own work, or that in a lecture there will be some transitive property of success. Maybe the appeal should just be the ability to listen to someone you love speak ecstatically about what they love.

And here I find myself coming back to the idea of Varda by Agnès as a conversation. It isn’t, but I wish it could be, and that may be the point. I’m reminded of a part in Plato’s Phaedrus where he discusses the limitations of written language. Written language is dead. We cannot ask a text additional questions in hopes of new answers, or seek further clarification from the text itself that isn’t already written down. Instead, we would go to the living author of the text for that. There is a difference between the static text we read and the living dialogue we engage in with others. 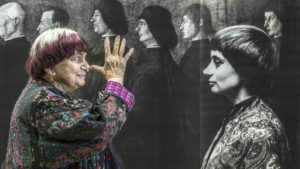 While Varda by Agnès is conversational in tone, it isn’t quite a conversation simply because one of the world’s most beloved filmmakers is no longer with us. She is unable to create new cinematic texts, or to meet us after the masterclass and offer another anecdote or accept a thank you. Her work remains, though, and it is the rich, compelling, passionate stuff of her life. And there is this film, a celebration of that life and its fruits.

The way Varda centers these masterclasses on three words reminds me a bit of Italo Calvino’s Six Lectures for the New Millennium. The Memos were a series of lectures about Calvino’s literary sensibilities, yet he died before he could complete them. His five finished lectures were on lightness, quickness, exactitude, visibility, and multiplicity. The sixth lecture was on consistency, but it was never written, allowing us to imagine what that might have entailed. Maybe that open space of wonder and imagination is how a type of conversation might be carried out with the dead and their existing texts.

In that regard, Varda by Agnès is not a conversation but a means to prompt an audience into further conversation. We can have a living dialogue with one another outside of these texts, to keep Varda and her spirit alive in some way, to champion her work to others, and to share it. Again, partage. In the most splendid contradictory way, the text is not a conversation, and yet it makes us speak when it speaks to us. Whenever we are moved, we talk back. That might be why at the end of Varda by Agnès I mouthed “Goodbye” to the screen. 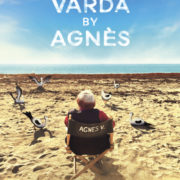 You will definitely like (and possible even love) this film. It probably won’t not change your life, but you’ll be glad you saw it.
7.7

Varda by Agnes is a fine farewell to the beloved filmmaker. Varda's warmth, playfulness, generosity, and vision pervade the film, and remind us of the legend we've lost.