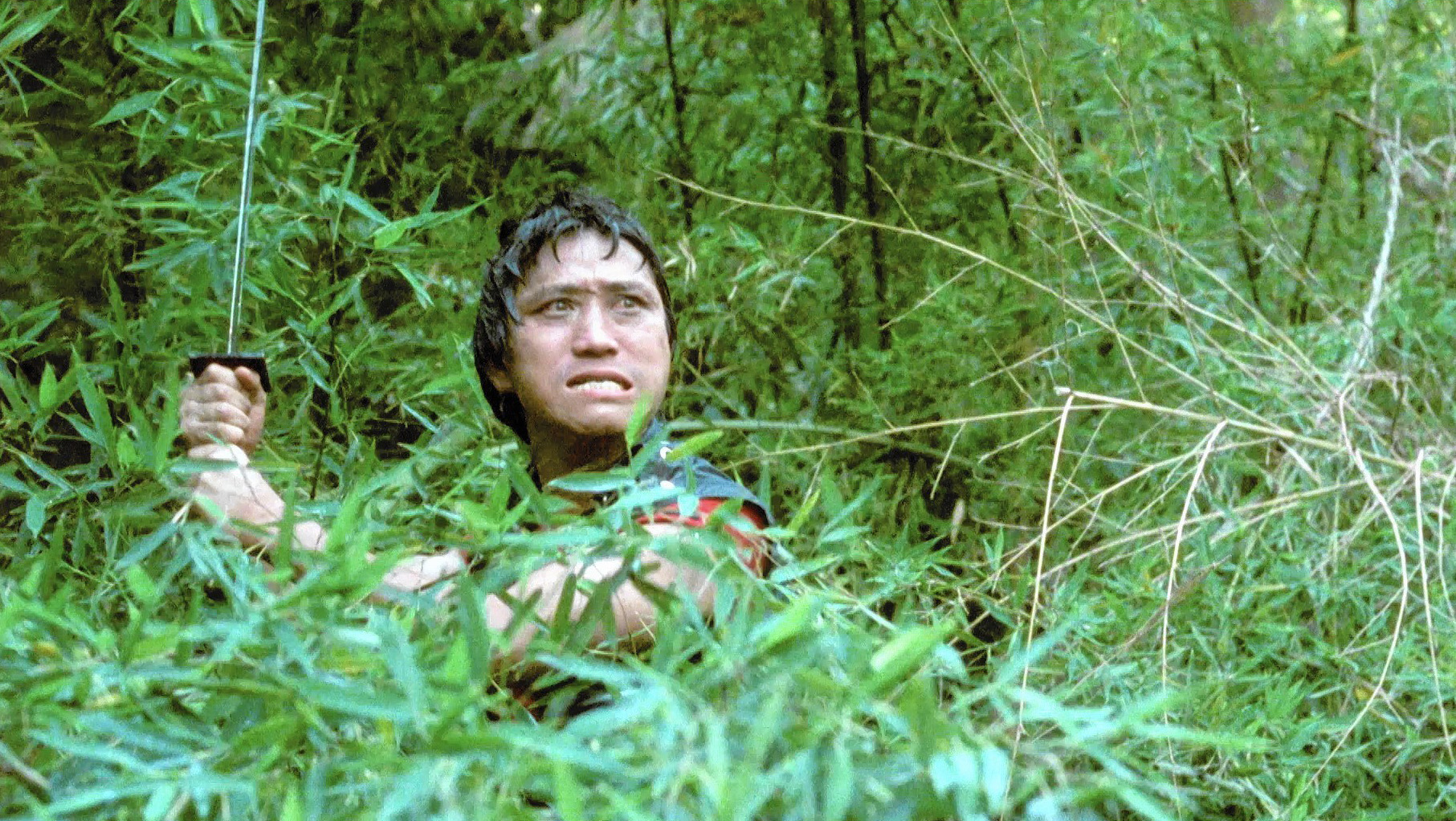 Continuing to prove that there was no period better than the end of the 80s to deliver flicks that have stood the test of time and have remained bad, meet Miami Connection. It was bad then, bad in the 90s, and is just hilarious now. Terrible music? Yes. Bikinis. Absolutely. Ninjas … maybe! And scenes that should be what are called establishing shots that drag out into entire music videos for no reason whatsoever.

This movie may surprise you with not only its functionality, but its competency, at least for approximately 10 minutes. It opens with a fully, if not well-imagined, described action sequences that portrays a story, conveys it, and does so while not looking like amateur shooting. It’s some time before some of the obvious tropes of bad movie filmmaking rear their ugly heads; for example, I’m not even sure I noticed terrible dialogue-dubbing until a half an hour in or more. But worry not, after that, it got much worse.

At heart, this is a tale of “central Florida’s hottest club” where Dragon Sound has just replaced the local cover band. Unfortunately for Dragon Sound, a boy band consisting of five male best friends who just so happen to be “black belts in tae kwon do” in addition to shredding rock on electric guitars. These guys believe in truth, justice, and honesty, as well as friendship for everyone. Yes, It’s Always Sunny in Philadelphia may have lifted the line from this movie (I won’t rule it out). So when the old band tries to fight them for their turf, well, they try to peacefully resist, but you know how those 80s were. Bullies owned the 80s.

Tie in another plot line about a criminal group of ninjas presumably called The Foot that steal cocaine and cash from other criminals, and you’ve got the makings of a veritable story. Only, this is a bad movie, not a good one, so let’s fuck that up by throwing in random tae kwon do demonstrations that go on for 10 minutes at a time, terrible audio production, random biker gangs with their passed-their-prime gang groupie “sheep” going topless for no reason whatsoever.

Their are more pulled punches in this thing than in professional wrestling. It’s especially funny when shots are supposed to be slow motion, or are about to go into slow motion, only the editing is terrible and they don’t start the slow motion until after the actors are visibly pulling punches and kicks. The fight choreography is about as bad as you’ll ever see–which is unfortunate because the 30 people or so they tricked into playing ninjas for this movie move convincingly! I’d believe they were actual ninjas! And clearly, a few of the principles know martial arts. Does it add an air of authenticity? Absolutely not. And whatever street cred it has is lost with outrageous chit chat that’s just awful.

Characters evoke repeated worry about waking up their neighbors, so much so that they actually say, ‘hey, what are you trying to do, wake the neighbors’ 2 or 3 times in the same conversation. Or characters get intensely focused on the arrival of mail and are creepily obsessing over mail and anyone else’s particular interest in mail. (Bear in mind, email didn’t exist, but this compulsion is still not excusable–it’s way too prevalent, almost as if the writer or director had never received mail themself and getting a white envelop in the mailbox was akin to the arrival of Halley’s Comet.)

What you have here, are some fundamentally good ideas, mildly talented individuals partaking in production, and zero ability to put it all together. Lucky us. 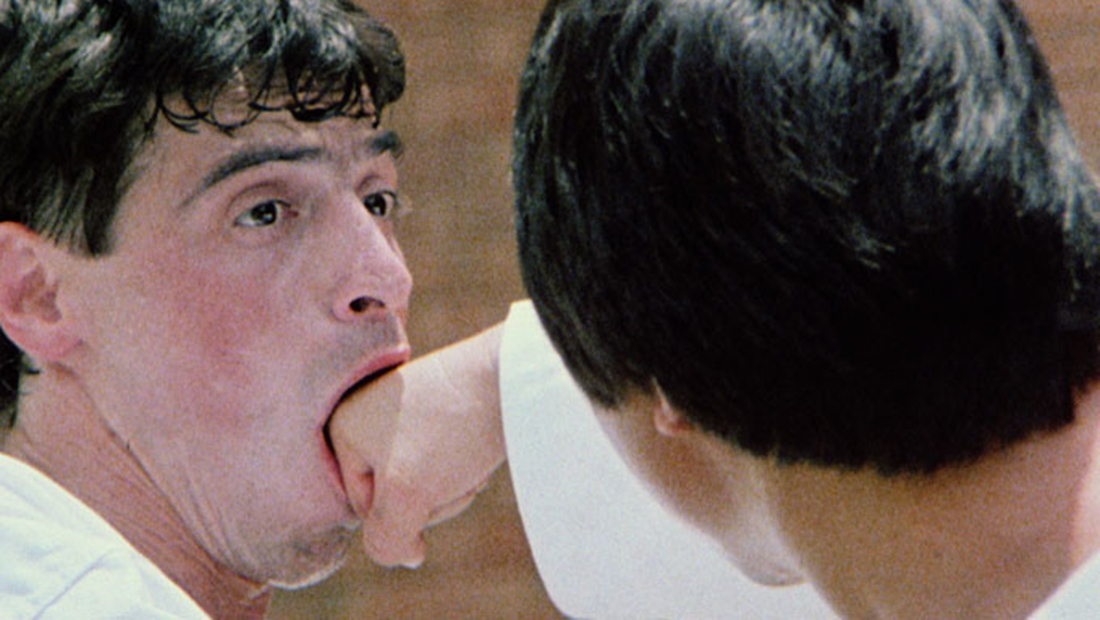 Sorry squad, while the bros of the 80s chased a lot of tail, they rarely got it. Mostly because they followed the Revenge of the Nerds book of dating. Meaning, act clueless, moronic, and unschooled in how to interact with girls—“Give me a kiss, ay!” 90% of the time, it works every time.

There’s one serious dating situation here, and it sets almost all the film’s events in motion. Will Jeff’s sister (they may not even give her a name) marry the Scarecrow (it’s the only way you can possibly think of this dude, especially after he runs around bare-chested with a samurai sword)? We’re not sure, but the way she made out with him on a lounger in the waves of the ocean—who sits on those on the sand? Not the band members of Dragon Sound! Put your chairs in the water bros! If there’s no threat of shark attack, it’s not radical enough!

The killing essentially happens by rounds. Round 1: Ninjas beat coke dealers. Round 2 (failed attempt): Everyone vs. Dragon Sound. Round 3: The band brings home all the hits and kills every motherfucking ninja ever.

JEFF’S SISTER: “It’s not your fault”

Presumably it’s been a day, maybe two. But that’s OK that her boyfriend killed her   brother. NBD, bruhs.

Did you just watch this movie? It revels in violence and fighting! Someone should have   explained that philosophically, this worldview does not align with their film-making   agenda.