The Irishman feels like it could be Martin Scorsese’s final film. It won’t be—he’s already working with Leonardo Di Caprio on Killers of the Flower Moon—and yet if you told me this was his last movie, I’d believe it. That may just be the nature of a veteran filmmaker returning to their famous preoccupations and collaborating with their go-to actors. Scorsese once again explores the fraternal brotherhood of organized crime in his ninth collaboration with Robert De Niro and fourth with Joe Pesci, who came out of retirement for the role. By coincidence, Scorsese, De Niro, and Pesci are all 76 years old. This movie can’t help but feel like a wiseguy elegy.

A few critics have suggested that The Irishman is the final part of a thematic trilogy that includes Goodfellas and Casino. The Irishman is not as visually or aurally bombastic as those films. You don’t have kinetic whip pans or insert shots from inside a coke straw. There’s a reserve about much of the film’s visual language and the rhythm of Thelma Schoonmaker’s editing. You won’t find the grandiose needle drops of Goodfellas or Casino either. No “Jump Into the Fire” or “House of the Rising Sun” moments. The recurring tunes are era-appropriate oldies you can stroll or slow dance to.

The Irishman is a movie made by an old man, and that is by design. It’s a movie about time, both funnier and more melancholy than you might expect. We watch as a man reckons with his guilt, looking back at a life full of regrets yet only recognizing them too late.

Based on Charles Brandt’s book I Heard You Paint Houses, The Irishman chronicles the life of Frank Sheeran (De Niro), a trucker turned hitman for crime boss Russell Bufalino (Pesci). Their paths eventually cross with Teamsters president Jimmy Hoffa (Al Pacino). This trio winds up influencing post-war America in myriad ways. They rigged a presidential election, they shipped arms, and, by implication, they got their fingers into a presidential assassination. Frank’s allegiances between Hoffa and Russell are tested, and these professional commitments strain his family life.

That’s just part of the story, though. Two other parallel narratives at different points of time unfold while we observe these friendships and power struggles against a backdrop of American history. The Irishman begins with an elderly, wheelchair-bound Frank Sheeran in a nursing home sharing his life story. There’s also a road trip in which Frank, Russell, and their wives head to a wedding in Detroit, making some “business” stops along the way. It’s remarkable how easy it is to follow and distinguish these separate narrative threads and how they continually inform each other. That structural juggling act could only be accomplished with a hefty runtime.

The Irishman is 209 minutes long, and you can feel every minute in a good way. It’s slow yet rarely plods. If the movie is about the effects of time on a person’s real and constructed families, we can get some sense of a character’s emotional contours by sitting with them and observing closely for an extended duration. Shave 40 minutes from The Irishman and you have a leaner film, but you lose its texture. The same might be said of Ari Aster’s Midsommar, Hu Bo’s An Elephant Sitting Still, or Chantal Akerman’s masterpiece Jeanne Dielman. Submitting to this texture, this pace, and the runtime are part of the experience.

Plot is plot, and plots are good, but the stories we admire can be more than just a series of efficiently presented events. We’re watching the arc of a character’s inner life trace itself across the screen over simulated decades. Think of the contrail of a jet flying high overhead. Memories linger before moving on, as if Frank—the old Frank in the home that opens the film—is recalling a moment from his past one last time before it dissipates. Maybe we’re watching Frank watch himself. I’d need a second viewing to solidify my strong feeling that the length is justified, but I admit that The Irishman is the sort of lovingly crafted indulgence that only a feted veteran filmmaker can get away with.

Beyond craft, the performances keep The Irishman constantly watchable. Pacino in particular is a kind of brilliant madman. As Hoffa, Pacino shouts, growls, pounds his fists, and embraces the eccentricity of his mannerisms. It’s peak Pacino for all the power and nuttiness that entails. During one scene in which Hoffa rants about Joe Kennedy, Pacino seems to flub a line. The camera continues to roll as Pacino (or Hoffa) recovers from his anger, composes himself, flubs the line again, recomposes himself, and returns to the rant with renewed clarity. There’s something real about watching a stumble and how an actor rights themselves afterward; there is also something admirable about keeping the imperfect take and realizing why it is such an odd gem of a thing. In real life, verbal slips like this are so memorable not just because what is said—Frank is in the room and feels offended by Hoffa’s words—but how they are said. 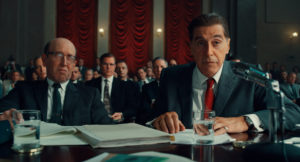 Pesci is low key as Russell, an inversion of his characters in Goodfellas and Casino. There’s a quiet menace about him. (Interestingly, many of the tense and funny moments of The Irishman occur in the dialogue or through on-screen text. Mirth and menace are relatively quiet in the film.) He has everything in control and has no need to sweat since other people are getting their hands dirty on his behalf. It’s a great contrast to Hoffa’s charismatic histrionics. Frank loves both men in different ways. Frank’s daughter Peggy—played as a child by Lucy Gallina and as an adult by Anna Paquin—is more keen on Hoffa than on Russell. She serves as a fascinating moral counterpoint to her father, albeit a silent one. In some ways, looking on, she is like a mute audience surrogate.

I’m of two minds about Peggy in The Irishman. She barely has any lines and mostly communicates through a series of glances at her father that change with maturation. Over time, Peggy’s curiosity about her father’s job turns to fear and then revulsion. She’s unfortunately one-note, and yet that one note, played often, haunts Frank throughout his life. Those quiet glances down a hall or across the living room are all he has left of her. Having just that—silence, judgement, no expressions of love—implies the size of this gulf between a father and a daughter. And then again, what would be gained or lost if she was more fully realized? I wonder the same about the other women in The Irishman, who are all essentially just daughters, wives, or mistresses. I suppose most of the women are tertiary figures in the film since that is the nature of this crime family power structure.

I’m much less conflicted about the extensive de-aging CG throughout The Irishman. Most of it is not great, even downright bad. The first meeting between “young” De Niro and “young” Pesci is awkward; their augmented faces are puffy, swollen, an unnatural shade of digital orange/umber. They almost resemble Dick Tracy villains. A brief scene featuring a de-aged De Niro in WWII looks more like something out of Welcome to Marwen. Other shots look fine, but so much of it has to do with the camera angle and the lighting. Yet even then, great CG can’t eliminate the telltale signs of age. The deep groove of De Niro’s frown line is such a tell, and the same goes for the thinner upper lips that seem untouched, unpuffed. And while CG can smooth out faces, it cannot hide the effects of age on the body. Frank’s face may be in its forties while he roughs up a grocer, but his high shoulders and hobbling step are that of a man in his seventies. All the characters, to varying degrees, seem to be perpetually somewhere in their sixties. 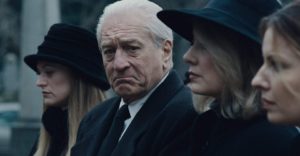 The de-aging CG becomes especially obvious later in the the film. A number of the actors are not just de-aged but later also aged-up. The aging makeup is excellent and much more realistic. With white hair and deeper wrinkles, the actors arch and contort their postures to communicate the ravages of time. Not only has Frank’s body been bent, but so has his heart. It’s in the old age sequences that the full gestalt power of De Niro’s performance shines. We see so many versions of Frank—the swaggering hitman, the affable wiseguy—but alone, this is who he really is: a weak old man yearning to reconnect and realizing the difficulty, the impossibility, of getting what he wants.

The Irishman starts small, tumesces, and then constricts in such a fascinating way. The runtime and the separate narrative threads emphasize this elegiac expansion and contraction, and so does Scorsese’s reserved tone. The mood shift in The Irishman’s final hour would have seemed so abrupt had the rest of the movie been carried out with the flair of a late 80s/early 90s Scorsese movie. By remaining quietly observant (like Peggy looking on at dad from the stairs), the winding down of Frank’s story feels carefully calibrated. We have watched him for so long already, and now it is time for a long goodbye. A shame to see him go, and like this.

In the closing section of The Irishman, I began to think of Yasujiro Ozu’s final film, An Autumn Afternoon, in which an elderly father comes to terms with his daughter getting married and moving out. That film contains the line “In the end we spend our lives alone.” An Autumn Afternoon is nothing like The Irishman, but they share that wistful sentiment of old age. The Irishman is a movie about family, among other things, but it is also about the inevitable loss of the families we make or are born into. Forget guns and knives—loneliness is the wound from which no one can recover. 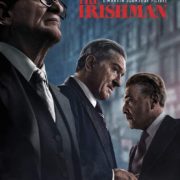 This film is an exceptional representation of its own genre, and anyone and everyone should love it. Expect to see it on year-end lists.
8.5

The Irishman plays like a career capstone for Martin Scorsese. It is a compelling and thoughtful rumination on guilt and regret propelled by Pacino's bombast, Pesci's menacing restraint, and De Niro's melancholy understatement.