0
From the Flixist community blogs!

[Community member TheeHeadAche has been quietly chugging away in our community for some time, and we’d like to recognize his awesome work by highlighting his thoughts on Rick and Morty’s most recent dark as all get out episode. If you’d like to see your work on the front page, share some thoughts in our community blogs! — Nick]

From “WubaLubaDubDub” to “I love my grandkids!”

Dan Harmon & Justin Roiland are some damn fine entertainers. Roiland is one of the most bizarre talents leading television today. Harmon’s entire catalogue of work seems to take the eccentric and makes it palpable. Between them both, they managed to put together something that has held not only my interest and attention, but also my admiration.

I have to imagine the great talent of Roiland has only pushed Harmon to make this show into something beyond Roiland’s initial short. The Rick and Morty prototype that is Doc and Mharti is a crude and.. well as Harmon puts it, “a pornographic vandalization” of the characters Roiland used to express what can only be seen at the time as creative frustration. While Rick and Morty is not as brash as the short, it still holds a similar bite that you can’t experience anywhere else besides Adult Swim. 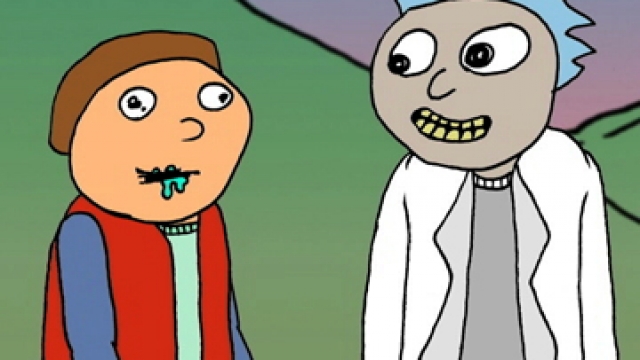 When first hearing about this show a little more than a year ago, I had moderate expectations. I had seen the short and knew they couldn’t operate on the same vulgarity level as that. I was familiar with Roiland as the embodied of his Adventure Time character, the Earl of Lemongrab, which himself is a crass and awkward deviation of Pendleton Ward’s almost idyllic Candy Kingdom. I anticipated the show to bath in the madness and zaniness of Roiland. What I did not expect was what Harmon was going to bring to the show.

I have been a long time fan of Harmon. The Sarah Silverman Program was a favorite of mine when it aired. It held many of the same qualities as Rick and Morty: juvenile, insensitive and impulsive while taking on some very sensitive and adult issues. TSSP was a very light-hearted and somewhat tasteless product, taking notes from the show’s namesake, who herself always seems to get away clean using only a smile and a giggle. With his development of Community, Harmon’s aptitude for writing lovable yet ludicrous characters really shone through. Each character in TSSP and Community, no matter how small, felt whole from the audience’s perspective. Although I did not follow Community after season 2 or 3, those characters resonate with me even today. He managed to take the each archetype presented and alter them into something more. Don’t get me wrong, Roiland’s voice is loud and clear within Rick and Morty but it is Harmon’s guiding hand that gives Rick Sanchez so much heart.

After recently viewing the latest episode of Rick and Morty, “Auto Erotic Assimilation,” I have felt compelled to tell you all of this. Not because Rick and Morty is sometimes sweet, funny, dark and harsh, which it is, but because it packages real human issues and self-reflection into a show based on a short where a man tries to get his grandson to blow him to save the world. Roiland is one of the most ridiculous writers around today and Harmon continues to give meaning to the madness. While some of the character moments and plot points of season one can be seen as rushed or forced or even underdeveloped, you can admire the effort needed to make these characters real. Harmon takes everything alien and makes it recognizable. Roiland and Harmon have really hit home with what television science fiction should be, an examination of what could be to explain what we are and where we are going.

Roiland’s absurdity and Harmon’s gravity cement them as a creative team not to be taken lightly. I hope they continue to make this show more insane and boorish while subverting it all with meaningful character moments and even more impactful character progression.

Matt Reeves’ The Batman clocks in at just under three hours

Shenmue the Animation debuts on February 5, 2022