0
You won't know the facts until you've seen the fiction...

Iconic filmmaker Quentin Tarantino has announced that he plans to release his first novel, a spin-off of 2019’s Once Upon a Time in Hollywood, in the summer of 2021. This would mark the director’s first major artistic foray outside of feature filmmaking.

Tarantino has signed a two-book deal with publisher HarperCollins, with the first release set to be his Hollywood spin-off. Said to be a “shocking departure from the film,” the novel will arrive as a mass market paperback–in the tradition of the pulp westerns and movie novelizations of Hollywood‘s 1969 and Tarantino’s affinity for classic film stylings. Digital and audio editions will be available as well, with a “deluxe hardcover” to follow in the fall of 2021. On the release, Tarantino had the following to say:

“In the seventies movie novelizations were the first adult books I grew up reading, and to this day I have a tremendous amount of affection for the genre. So as a movie-novelization aficionado, I’m proud to announce Once Upon A Time In Hollywood my contribution to this often marginalized, yet beloved sub-genre in literature. I’m also thrilled to further explore my characters and their world in a literary endeavor that can (hopefully) sit alongside its cinematic counterpart.”

The Once Upon a Time in Hollywood novel is said to chronicle Rick Dalton (Leonardo DiCaprio) following the events of the film, as he “attempts to extend his career in Italy.” The novel sounds as if it will incorporate an even grander blend of fact and fiction, with Dalton running into Hollywood icons like Burt Reynolds, Pete Duel, and Jim Brown. 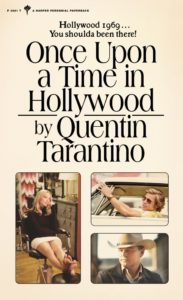 The second book coming from Tarantino is non-fiction, titled Cinema Speculation. Harnessing the film buff knowledge that Tarantino has made an image out of, Speculation is written in the tradition of legendary critic Pauline Kael, whom Tarantino has long professed admiration for. Cinema Speculation will be a “deep dive into the movies of the 1970’s, a rich mix of essays, reviews, personal writing, and tantalizing ‘what if’s,’ from one of cinema’s most celebrated filmmakers, and its most devoted fan.”

If this isn’t some good news to wake up to, I don’t know what is. After possibly hitting an apex of his filmmaking craft with 2019’s Hollywood, it seems Tarantino is indeed walking-the-walking in taking control of his career. Saying for years now that he’d limit his directorial output to 10 films before moving on, the upcoming book releases would indicate that he is indeed making that transition. But with Hollywood having been his ninth film, it would seem preemptive to think of Tarantino as being out of the filmmaking game just yet.

With the pandemic limiting productions it would seem most appropriate for Tarantino to dip into the literary world now, and I’m here for it from the first page.