An American Pickle is as wacky as you could hope. A Polish-Jewish immigrant named Herschel Greenbaum (Seth Rogen) is accidentally pickled for 100 years after falling into a vat of brine. Revived in the modern day, he’s immediately a sensation but has a bit of adjusting to do, especially when he meets his great-grandson Ben, also played by Rogen. Based on Simon Rich’s 2013 novella Sell Out, which was serialised in theNew Yorker, it’s an unexpectedly heartwarming, fish-out-of-water (pickle-out-of-brine?) summer release.

In Herschel Greenbaum’s previous life, he was married to a beautiful woman named Sarah. Living in the Polish town of Sluchpsk (based on the real-life village Slupsk), their hopes and dreams came to the sum total of being happy together forever, having a prosperous family, and perhaps even being rich enough one day to drink Seltzer water. They emigrate to America, as many Jews did, in the hope of a better life, but all of this is cut devastatingly short after his untimely accident.

When Herschel miraculously awakes in the modern-day, it baffles everyone. A press conference immediately brings him into the public eye: in a hilarious sequence, a scientist explains to a room full of skeptical journalists the science of the preservation — to which we aren’t privy. Whatever the explanation was, it satisfies everyone in the room — and that’s just an example of some of the well-placed irony and wry humour used in the film.

As Sarah was expecting a child when he disappeared, Herschel is able to track down one living relative. Naturally, he has a bit of adjusting to do. Living with his great-grandson Ben, an app developer, he’s amazed at the convenience and luxury of modern living. He can even make his own Seltzer water — on tap! Here, he is not accosted by murderous Cossacks or shoveling dirt for a living.

But when Ben and Herschel come to a disagreement, the determined centenarian decides to make his own way in Brooklyn. Ben maintains that he won’t be able to survive a day on the streets, but through his resourcefulness, Herschel starts a DIY pickling business. And it’s good. So good, in fact, that his ‘artisanal pickles’ draw hipsters from all over New York. The film is as much a skewering of Gen-Z culture, with its fads spreading faster than you can speak, and the fickleness of modern life, as it is an exploration of heritage and ancestry. 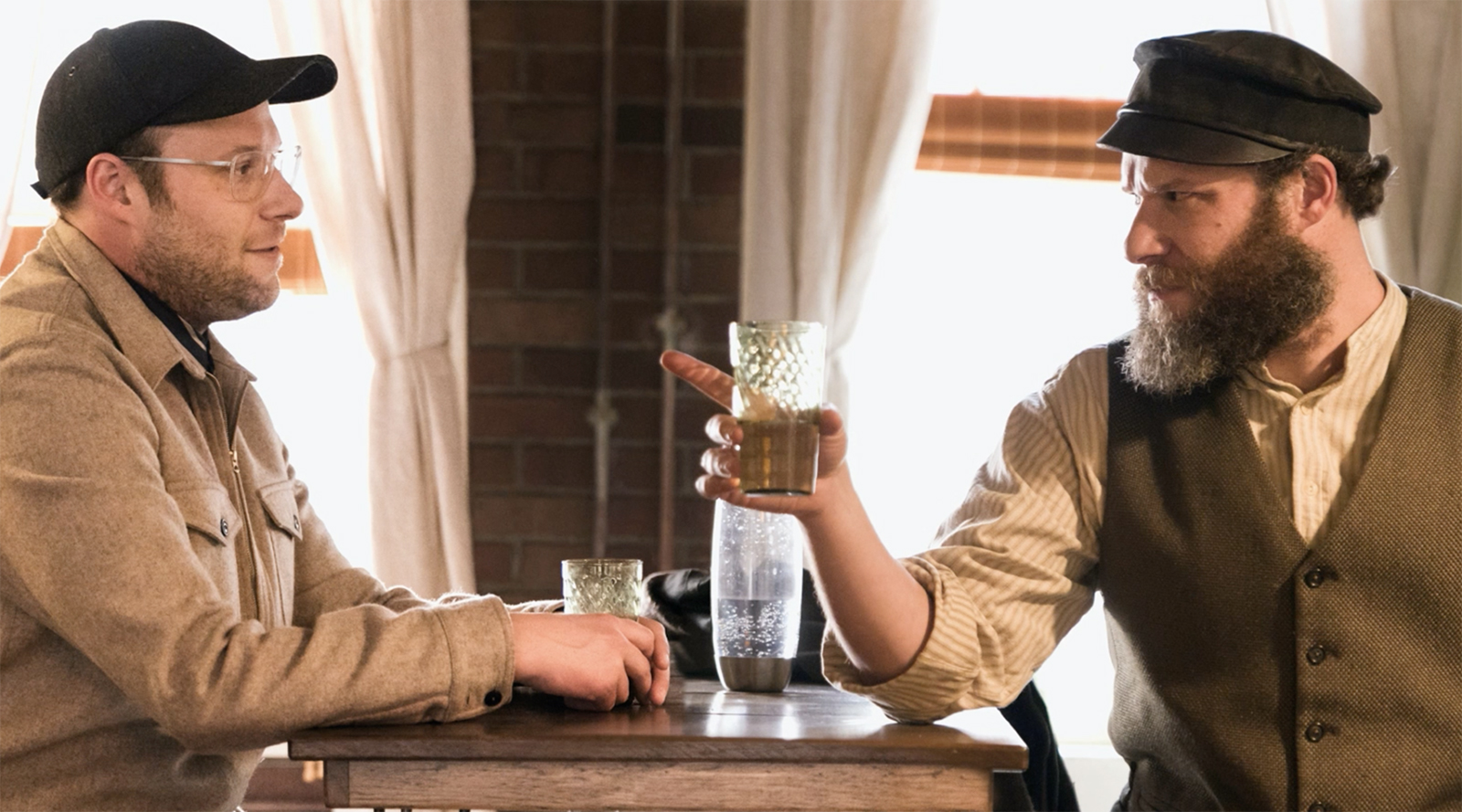 The film’s name, An American Pickle, could refer to several things. It could mean the pickle factory where Herschel works; the strange ‘pickle’ (predicament) he finds himself in; or the fact that he, himself, is a human pickle, American by his choice to live there. Not only that but if you really wanted to stretch this pickle allegory for all its worth, why not take it to mean the predicament of modern American society? The film takes a bizarre turn, commenting on the social and political landscape, using Herschel’s genuinely confused cries of ‘What is going on here?!’ and amplifying them. Surprisingly, this film really works on multiple levels!

What I’ve enjoyed the most about Rogen’s recent films is his return to his Jewish roots. In the sublimeLong Shot,he’s Fred Flarsky, an outlandish left-wing, Jewish journalist, who’s passionate about justice and telling the truth with his writing. In An American Pickle, Herschel displays many of the same traits — devoted to his way of life, his family, and devoutly practising Judaism. Rogen is conscious of these traits, and together they form sympathetic characters.

You’ll enjoy references to Fiddler on the Roof (Herschel matches Tevye in temperament and appearance), Barbara Streisand’sYentl (1983), which Herschel and Ben enjoy chatting about. An American Pickle is a fascinating story not only about family and values but about becoming an entrepreneur out of necessity and turning adverse circumstances into good. 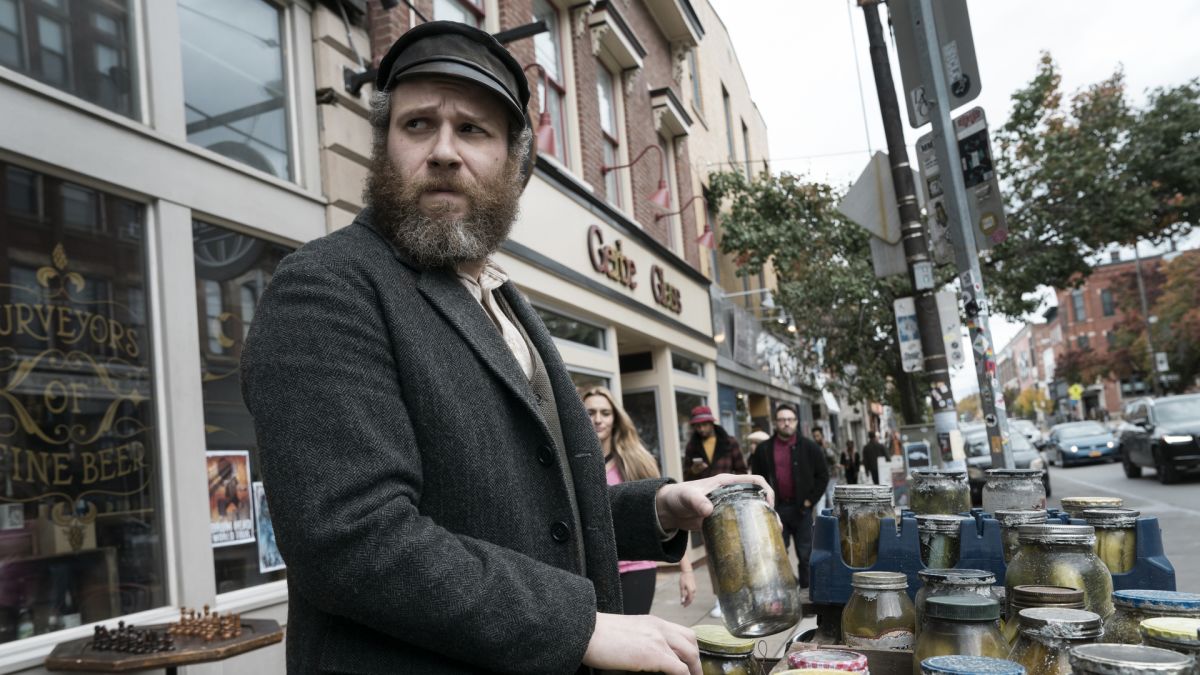 While he’s innocent about a lot of the things in the modern world, Herschel remains a savvy businessman. In the original story, he sells out, not knowing about the consequences of his greed until too late. But in the film, he remains a simple man, enjoying the pleasures of life. He faces adversity and even sabotage, with a sequence seeing him rise to fame only to become immediately publicly disgraced. But he never loses his principles and helps his great-grandson reclaim his lost heritage and reconcile with the Jewish faith.

While the film was a lot of fun, it wasn’t perfect. There are a few idiosyncrasies, including Herschel’s surprise at taxis and skyscrapers, both of which would have been around in the 1910s. I might have expected more of a climax, and though the film takes us on a few twists and turns, meaning it’s never predictable, the pace sometimes felt too fast. It would have been good to dwell on the characterisation in a bit more depth. We’re given some of Ben’s backstory, but while it’s sympathetic it doesn’t always feel credible.

Still, An American Pickle is a film that makes you think, maybe we already have everything we want! Compared to a man in Herschel’s situation 100 years ago, we’re wealthy and have every convenience. The values of the film were life-affirming, and in a year when everything seems to be going wrong, it’s almost as if the film is asking us to take a step back and appreciate what we do have, like family and friends, and the simple pleasures of everyday life. 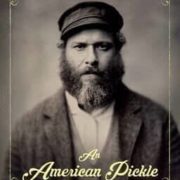 It’s easy to like this one. Some minor gripes here and there, but still fun.
7.3

Based on Simon Rich’s 2013 novella Sell Out, An American Pickle is an unexpectedly heartwarming, fish-out-of-water (pickle-out-of-brine?) summer release.