0
This is not going to go the way you think

Yes, I invoked The Last Jedi, and no that’s not because I want to instantly guarantee 11 million comments on the post. It’s because, like that film but to a lesser extent, Avengers: Infinity War is not the movie you’re expecting, often throwing what you’d thought you’d get away and delivering something you didn’t know you wanted. It is, at times, melancholy, silent, thoughtful, emotional, and completely devoid of action. Major action set pieces disappear from the film for long stretches while it — shocker — develops its characters, only to return all the more powerful and complex because of it.

This isn’t to say that Infinity War isn’t big and bold and prolific and full of everything you’ve come to expect from Marvel, but it’s also quiet in ways you wouldn’t even have thought. And this all stems from the least likely culprit for a Marvel movie: the villain.

I am not about to recap 10 years and 18 films worth of plot line for you, so if you don’t have a decent grasp of what’s been going on in the MCU over the last decade then this might not make any sense. That being said, Thanos (Josh Brolin) has finally located all of the Infinity Stones, which have played a part throughout the films, and if united under the control of one being give that person ultimate power over everything. Since he’s located them he’s on a quest to get them so that he can eradicate half the population of the entire universe. This will, according to him, end starvation, poverty, overcrowding and every other issue that plagues the universe. Obviously, the good guys aren’t really down with that and the entire cast of every Marvel movie joins together (with a few surprises removed and thrown in) to stop him.

The film’s plot plays out as most crossover comic book events usually do. Some heroes go one way to do one thing while other heroes go another way to do another thing and it all culminates with a massive, universe spanning battle. It’s what happens in the small notes that makes Infinity War work, especially when it comes to Thanos, who the movie probably spends the most time with. See, this movie isn’t actually about the Avengers. It’s about Thanos. He’s the main character of the film and unlike other Marvel films (*cough* Age of Ultron *cough*) he is given the room to become a character outside of being a big bad. A running issue among the Marvel films is that the villains are given short shrift despite being some of the most interesting characters, this is not the case for Thanos. He is the lead of this movie and he is the emotional and thematic core to the film. It is a stunning shift in focus from the previous films, and a good one. 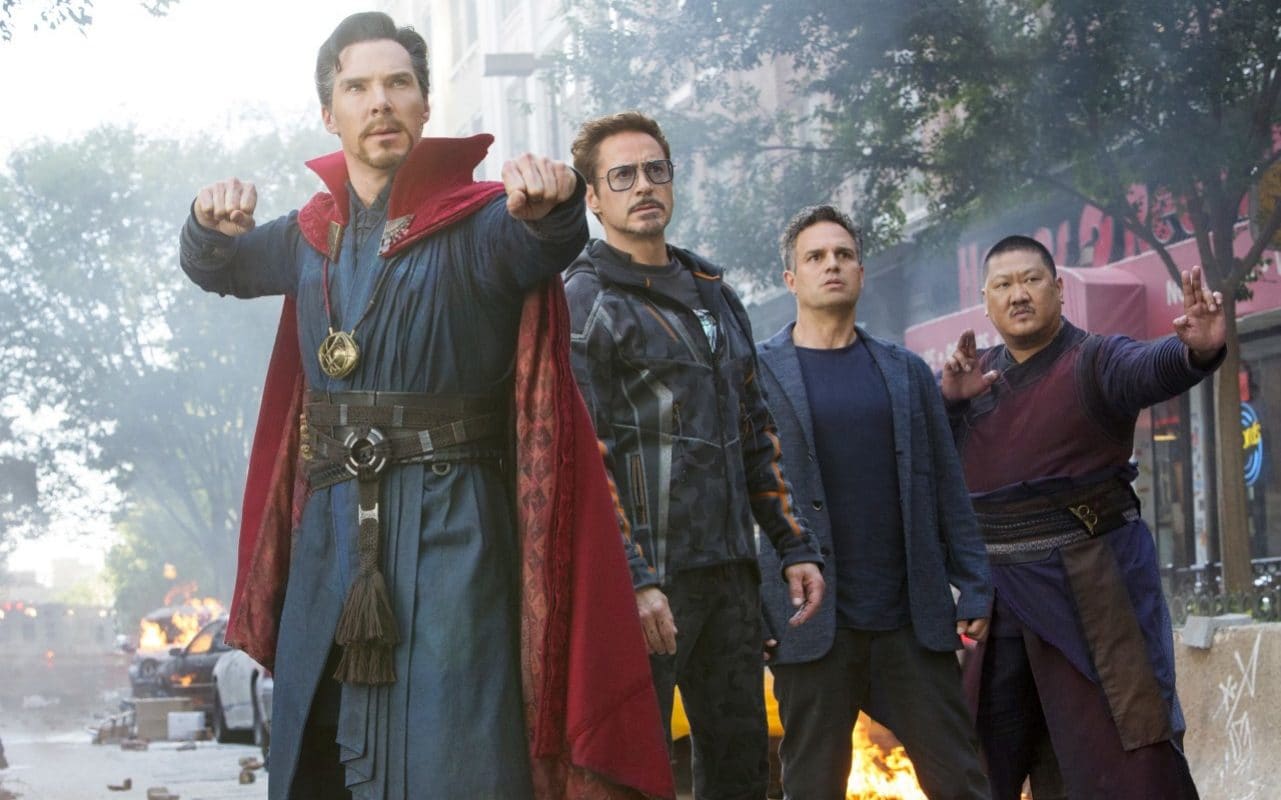 The Mad Titan could have easily been handled with the simple air of a monster coming to destroy the earth, and our heroes yet again learning that they have to work as a team to win. But Marvel has done that twice over now, and they’re smart enough to know that. Instead, they treat Thanos almost as the hero of the film, with Brolin growling out is lines like almost no one else could. It’s hard to discuss much without spoiling things, but there are moments in this movie where Brolin and the Russo brothers make you feel for a giant, purple CGI alien guy hellbent on killing half the universe. It’s a far more somber tone than the films have taken previously, and yet it feels right in line with the direction the Avengers films have been heading.

That’s not to say that the Avengers, Guardians, and side characters galore don’t get their own time to shine. Thor’s (Chris Hemsworth) storyline is especially powerful and should quell the rage of those that found Thor: Ragnorok a bit too flippant with the character. Iron Man (Robert Downey Jr.) has been building up to this confrontation since the first film, and it shows in his actions, while the Guardians team is yanked into darker themes than they’ve ever had to deal with. 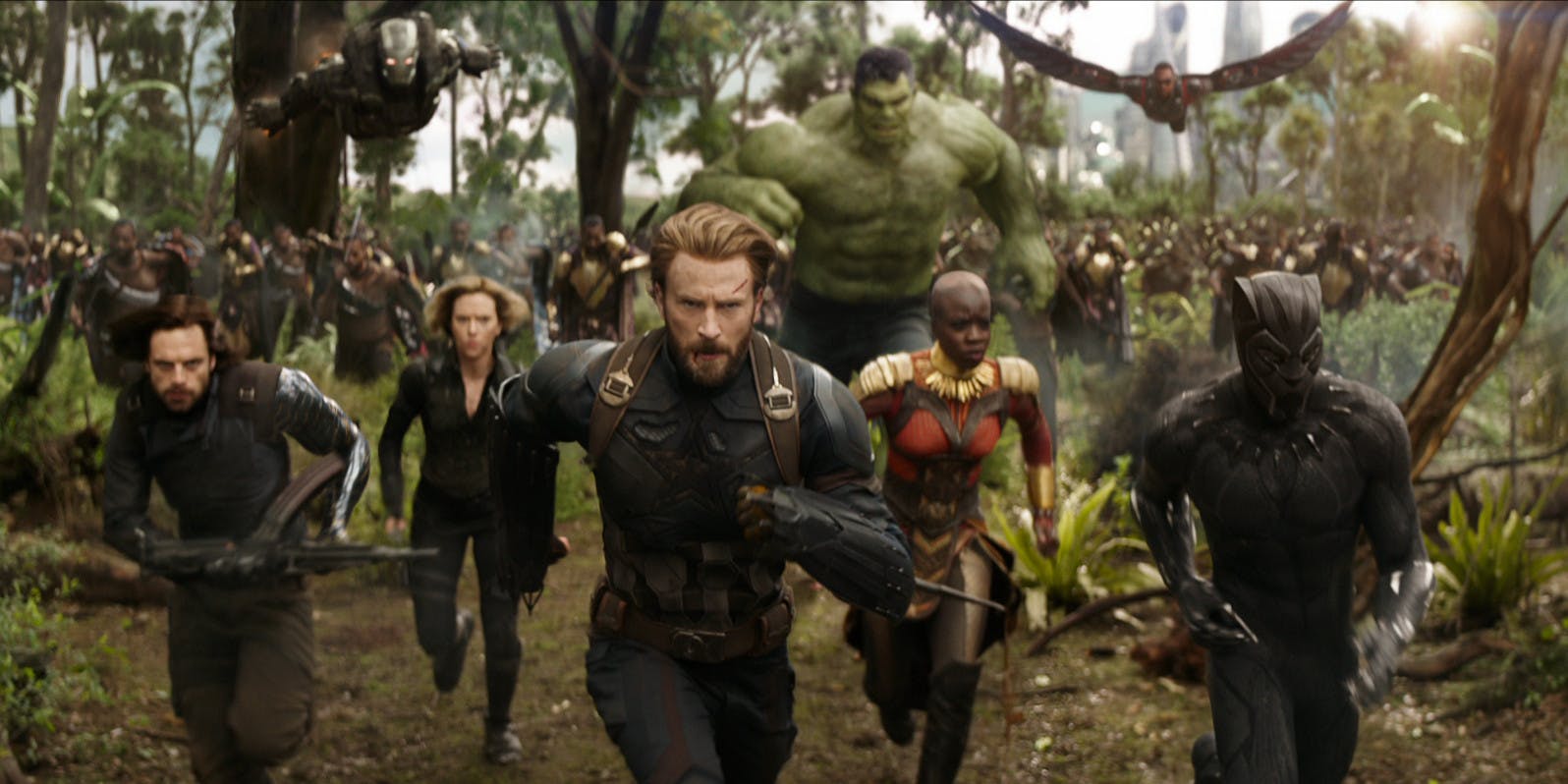 I hate to once again compare the DCEU to Marvel (that’s a lie, it’s tons of fun), but Marvel takes something that DC has been desperately trying to do and does it 100 times better. The movie is often dark and depressing, but unlike the likes of BvS it is never pessimistic or hopeless. DC has been trying to deliver an edge by dulling their colors and trudging their characters through the muck from the get go, while Marvel realizes that loss and anger and fear are all the more powerful when there is hope and happiness and bravery to go alongside it.

And competent direction. The Russo brothers have one hell of a knack for taking convoluted, massive casts and sorting them out into coherent and functioning storylines. Maybe it’s because there’s two of them so they can get a better grasp of these things, but where most movies of this size fall apart under their own weight (*cough* Age of Ultron *cough*) the Russos have now pulled it off twice in a row. They’re not breaking new ground on the level of Black Panther or anything, but it helps that they’re probably some of the best action directors working at the moment, able to piece together massive sequences with a plethora of disparate activities into a cohesive whole. It’s a testament to their ability to construct and pace not just action sequences, but the entire film, that a nearly three-hour movie never feels long or bloated. 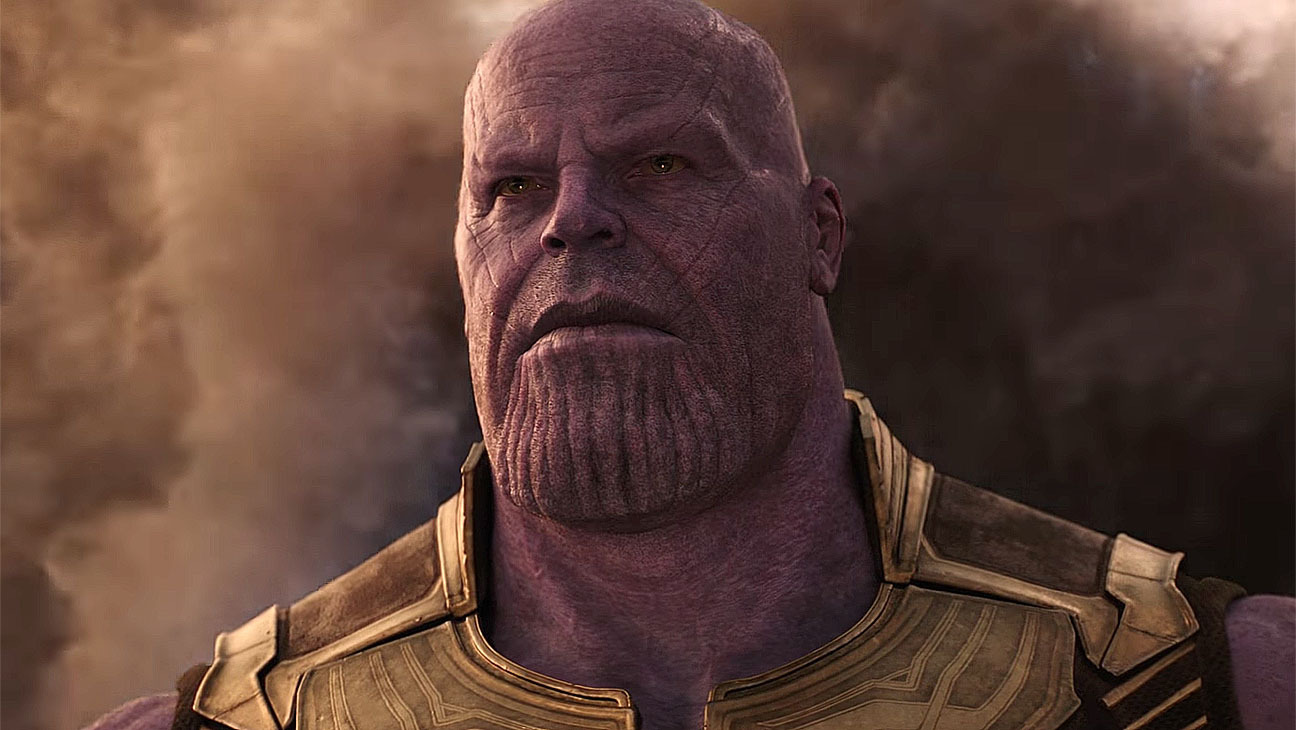 While I said the action does go away for longer than expected stretches, one shouldn’t assume that there is none. The film’s climactic battle is climactic as fuck. It’s about ten years worth of climax, and the greatest thing is they’re still holding back. This isn’t the real climactic battle–that’s coming next year in the next Avengers film–and yet this battle is prolific, interweaving multiple planets, fights, and showdowns like a giant superhero ballet. There are team-up moments here that rival the feeling you got when you first saw Iron Man blast his laser into Cap’s shield in the original The Avengers.

It is not a perfect film, though. While the movie takes great care with Thanos, and its character development and plotting are good, there’s still a plethora of characters crammed into this thing, and it can feel crowded at times. Dr. Strange (Benedict Cumberbatch) is an especially weak point as he mostly seems there to advance the plot despite playing a major role. Maybe it’s because it’s still unclear what Marvel has planned for the character given they don’t even have a sequel confirmed, but he’s not the only one to get a short shrift. Teenage Groot (Vin Diesel) is mostly just a punchline, and, while it’s par for the course, both Falcon (Anthony Mackie) and War Machine (Don Cheadle) are basically there just to fly around. Hell, even Captain America (Chris Evans) gets a bit jilted considering where we left him at the end of Civil War. 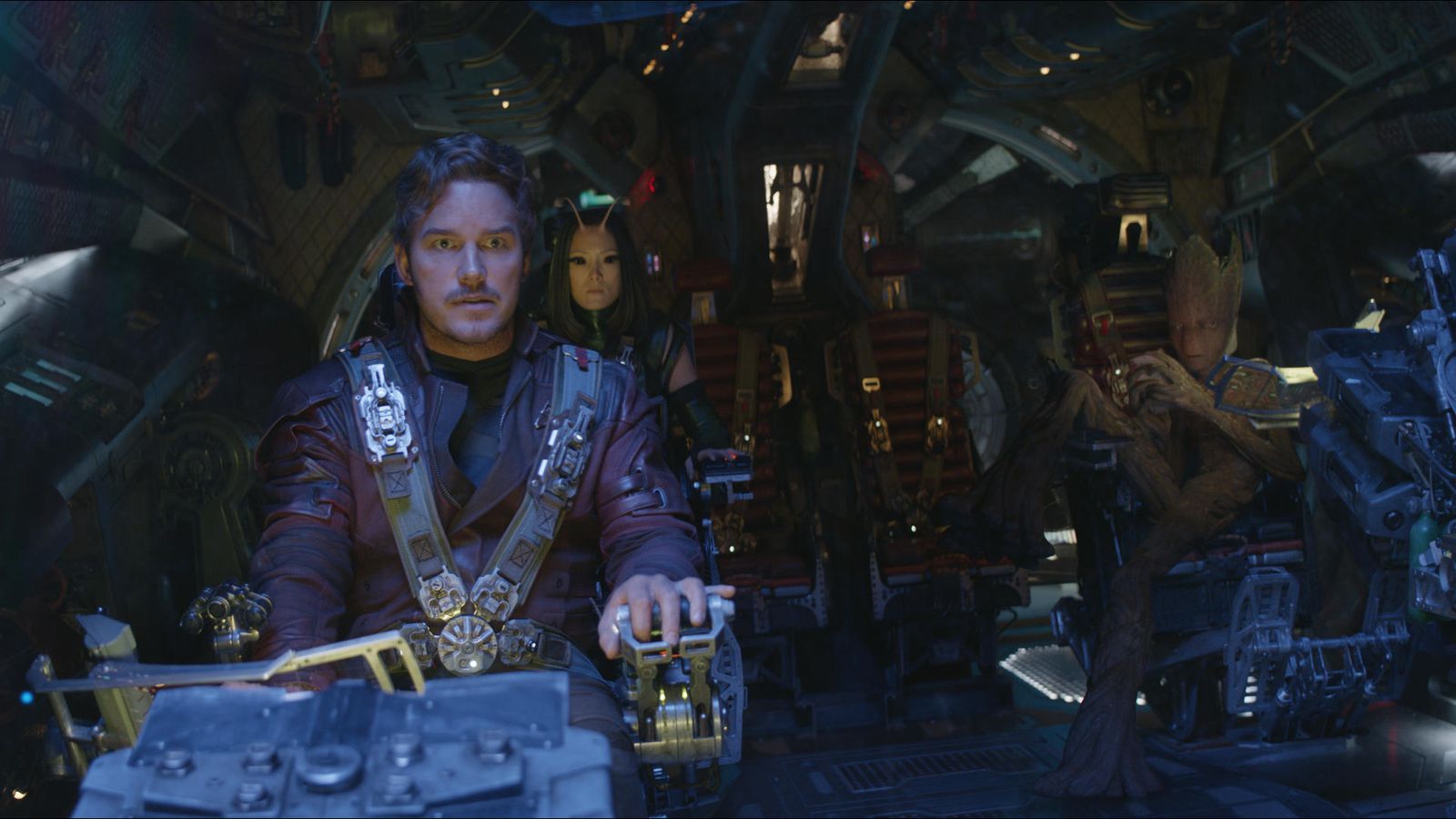 All that being said, this is, in essence, a two-part movie and should probably be considered as such. Given the amount of characters and story that’s going into this, it’s hard to begrudge them an inability to flesh out every character without the six-hour running time of both films. Infinity War has its own three-part structure, but its denouement is also clearly only the midpoint of a second act. Does that make it a weaker film on its own? Of course, but given that Marvel has constructed a movie universe that’s built around multiple films I find that hard to be angry about. And given the ending of this movie, the ramifications that are going to unfold throughout the MCU deserve more than one film anyway.

I will also make mention of the humor since commenting on “Marvel humor” seems to be a thing. It’s there in spades, but never in a way where it is out of character or out of place. Thor’s initial scene with the Guardians is particularly funny, but Spider-Man (Tom Holland) and Iron Man both get their zingers in as well. If this is an aspect you’ve hated about Marvel films, it’s not going away, but unlike some others (*cough* Age of Ultron *cough*) it never feels out of place or forced. In fact, it balances out the darker tones of the film, never pushing into the more serious notes, but always dancing around to pull the movie back from the BvS brink.

What more is there to say? It’s good. You’re going to enjoy it. You’ve already bought a ticket anyway so my opinion matters little. Marvel has pulled off a groundbreaking feat, that has changed the way the movie industry functions, and what we expect from our films. Ten years after Iron Man debuted, and the studio still knows how to make us want more.