0
What if Superman was evil, but also boring?

There’s an interesting concept behind Brightburn. We take the Superman myth and instead of him being instilled with good morals by two wonderful Kansans he turns out evil instead. There’s so much to unpack in that concept. Debates about nature vs. nurture at the very high level, but also a look into parenting and how children are not actually us. You can go macro and ponder how the world reacts to a super powered child destroying everything or keep it micro with an in-depth look at how a family would fall apart under such pressure. It’s such an interesting concept to unpack.

Unfortunately, Brightburn is too busy with its lackluster gorefest and tepid attempts at being scary that it completely bypasses all the interesting thematic ideas that the film could have delivered. The movie is just a slasher film, it turns out, and not a very engaging one at that.

Brightburn doesn’t even try to mask that it’s basically a “What if…” Superman story (Yes, I know “What if…” comics are Marvel. Don’t @ me.). Tori (Elizabeth Banks) and Kyle Breyer (David Denman) are a young Brightburn, KS, couple struggling to have a child when one night a spaceship crashes near their house. The adopt the baby they find inside and name him Brandon (Jackson A. Dunn). Everything is going just fine, aside from Brandon being a little nerdy and picked on in school, until his 12th birthday when the spaceship he crashed in wakes him up at night and makes him evil and super powered.

The real crux of the problem with the film is that Brandon is just straight up evil without any question or reasoning. Once his powers awaken his turn towards evil is defacto. He was always going to be evil because his spaceship is evil. There’s no internal struggle for the nerdy pre-teen, just an evil switch that is flipped so he can start killing those he thinks that wronged him. The fact that he was raised by two loving parents doesn’t seem to come into play at all, and even their steady realization of their son’s evilness feels incomplete. While not as good in the horror front, it feels much akin to We Need to Talk About Kevin, which also missed a lot of opportunities to unpack bad kids and where evil comes from.

It even shies away from the religious undertones of a child being delivered from above to a family who had prayed for it. Superman as a Christ allegory has been done to death so why avoid religion on the whole except to tepidly dip your foot into it near the end? A family in rural Kansas should be dripping with Christianity, and giving them an evil son is so ripe for the picking, but instead it’s just Elizabeth Banks mentioning that she always thought Brandon was a gift once or twice. There’s so much to unpack and explore around this idea, and horror is actually a great genre to do that in, but the film just awkwardly jumps from one scene to the next without taking a moment to unpack itself.

Now, all that might be fine if the film just committed to its all-out slasher roots, but it can’t do that either. There are two gory deaths committed by Brandon before we get to the final sequence unfolding, and neither is that creative. The sections of the film that are supposed to be scary feel more like comedic moments, and there’s logic gaps that ruin some others. If Brandon is all powerful and evil to the core as the film suggests, then why isn’t he just killing everyone right off the bat? At one point his uncle catches him when he’s about to kill his aunt and he just makes up a lame excuse and then does some horror movie cliches before killing the uncle instead. I can forgive logic fallacies when there’s enough fun blood and gore, but Brightburn doesn’t deliver on that either.

The film has the Gunn family all over it, as James Gunn produced and the screenplay was written by his brother Brian and his cousin Mark. Those two have some work to do if they want to make a great horror film as they jump around the story so much it’s hard to care from one moment to the next. It felt like they pitched an idea and then realized they had no clue how to turn it into a feature-length movie, delivering instead two gory horror scenes and not enough time to unpack it all. Director David Yarovesky doesn’t bring much to the proceedings either, directing the film with competency but little aplomb. The scenes that are good aren’t as good as they could be and the scenes that are bad can’t be saved.

While the movie does disappoint on almost every thematic and genre front, it can be fun to watch when it clicks. The two death sequences (plus a quicker one near the end) are actually a bit of gory fun, and make you wish they’d just gone full bore into Brandon killing folks with his super powers. Dunn is also suitably scary as a super powered child, but he isn’t given anything to actually work with. On the whole it isn’t a poorly made film as it holds together its paint-by-super-numbers plot and rolls into its inevitable finish. The real problem is just that it doesn’t do more, simply cruising in at acceptable while missing out on everything that could make it great.

Brightburn is a slasher film without enough slasher and a superhero film without enough super. I’d say it raises questions without even answering them, but it doesn’t really raise any questions in the first place. It treats its premise with near disdain, content to only tumble through its set up into a conclusion it barely feels like it earns. With the popularity of superhero movies at its zenith, someone, somewhere is going to do this right, but that hasn’t happened with Brightburn. 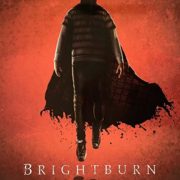