About once every year or so, a movie comes along that makes me fee like I can’t breathe or like I might explode if I don’t see it. It’s an idea so strange and wonderful, and that resonates with me so perfectly, that it lives in my head like a nagging half-remembered dream until I’m finally able to set eyes upon it. When these films -like Mandy, The Greasy Strangler, and now Butt Boy- finally fall before my eyes, it’s like Christmas morning. These are the kinds of movies I live for. It’s something new and unexpected, a feverish imagining immortalized on film and made totally real.

Sometimes, these films don’t live up to their promise and leave me deflated, feeling kind of like an idiot. In this case, however, Butt Boy is everything I could have dreamed it would be.

The theory is that suburban dad Chip Gutchell (Tyler Cornack) has made a child disappear up his own ass, and his butt is becoming more powerful -I assume similar to how one has to train his/her butt with different sized plugs to achieve maximum openness- the more often he embarks on twisted crime sprees. First, it starts with something small as a board game piece. Then, it’s a remote. Soon after, the family pooch goes missing. Before you know it, this guy’s got a baby up his butt and a city is in panic. This will certainly be a tough case to (butt)crack.

What undoubtedly strikes you first about Butt Boy is its execution. There is no denying the film is a labor of love. Rice is invested as a swaggering and haunted detective hellbent on solving his case. Shots of the city are dark and wet, lush with light and shadow. The opening credits alone give the sensation of a 70’s crime thriller. For all of its absurdity, then, Butt Boy’s greatest shock is how well it works as a thriller.

There’s a palpable tension between the totally shutdown Chip and his wife Anne (Shelby Dash) who’s dealt with his obvious lies and addiction for years. She has cracked beneath them in a way that feels true to anyone who’s lived through a similar situation. A scene in which Russel discovers a crucial piece of evidence in Chip’s bathroom is reminiscent of the same emotional shock and taut execution of Hank’s bathroom discovery in Breaking Bad. The greatest sleight of hand Butt Boy performs in its first hour is how effortlessly it absorbs you–like a dog up a psychopath’s butthole.

The last half-hour leans into a fully-earned absurdity that drags us through the quite literal bowels of hell, and it’s something to see. The gross-factor is strong as the visuals become more explicit, and Russel’s quest for redemption is outrageous, cathartic, and like nothing you’ve seen on film before.

It’s a bold risk to take such a juvenile idea and treat it with the heft and focus of a Scorsese flick. Director Cornack digs in and comes out the other end with a true success. Butt Boy‘s as funny and crude as it is seedy and dramatic. It’s fully-realized, never shying from scenes too real or too surreal, and for that it’s a triumph.

Butt Boy is without a doubt the weirdest movie you’re going to see this year, and if that’s you’re bag, then I’ll be damned if it isn’t also one of the best. 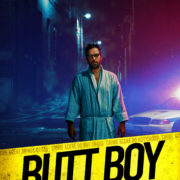 Butt Boy is without a doubt the weirdest movie you're going to see this year, and if that's you're bag, then I'll be damned if it isn't also one of the best.