Matt Murdock has had a hard life. Just when you think our favorite superpowered blind lawyer vigilante has totally hit rock bottom, the extraordinary situations that he gets into keeps bringing him lower and lower. Matt, a devout Catholic, has had enough of the big man upstairs. It isn’t that he no longer believes in God—it’s that he’s just sick and tired of his suffering brought on by God.

There’s a lot of brooding and complaining in the first six episodes of Daredevil season three; we’ve known the MCU version of Matt Murdock (Charlie Cox) for some time and we’re probably used to it. But finally, we’re seeing Matt work through it all, and a lot of it is due to some interesting adversaries and a kick-ass nun.

Plus, the action is pretty dope this time around.

While we have Foggy Nelson (Elden Henson) and Karen Page (Deborah Ann Woll) to catch up, I couldn’t stop thinking about Sister Maggie (Joanne Whalley), a character new to the show but undoubtedly familiar to those who know of the “Born Again” storyline from the comics. Having known Matt since his childhood, she helps him with his journey as he heals, both physically and emotionally after a building literally collapsed on him at the end of The Defenders. Sister Maggie does this with some tough love—biting sarcasm, eye-rolling, and the like all penetrate Matt’s angsty exterior. I’ve always appreciated how Daredevil, with all of its religious themes, has never had any stock Bible-thumping Christian characters, but actual, genuine people of faith. And if you’re tired of the Catholic guilt and brooding from Matt, Whalley’s excellent screen presence is a splash of holy water for all of that.

But enough about Sister Maggie, because there are actually other characters in this show. Foggy and Karen are both at different points in their grieving of Matt, Karen still holding on to hope and still paying Matt’s bills, and Foggy having nightmares and carefully using the word “gone” instead of “dead” when referring to him. I’ve always had a fondness for the two characters, even though Karen as a journalist is a bit cringy at times. We get more time with Foggy, even meeting members of his family, and with Karen, we see some parts of her past (including some forgotten points from season one) come back to haunt her.

Meanwhile, we have some new characters in a pair of FBI agents. Original character Ray Nadeem (Jay Ali) is a special agent who is undergoing through some financial trouble with his family, and even with his skills and talent, he can’t go any higher up as a result. Seeing an opportunity to get some information about the Albanian crime syndicate (side note: what is it with these Marvel-Netflix shows and ethnic gangs?) from the incarcerated Wilson Fisk (Vincent D’Onofrio), Nadeem takes a risk with a deal, perhaps moving too close to the sun. It’s a decent plotline, but at some point, you start to say “okay, I get it, let’s move on to something else please.” As for Benjamin “Dex” Pointdexter (Wilson Bethel), we’ll get to him later.

I’ve long wished for Vincent D’Onofrio to gain some more awards recognition as Wilson Fisk—sure, his verbosity and cadence are easy to make fun of and could be a bit exaggerated, but D’Onofrio has created such an interesting human character. He is able to switch back and forth between eloquent and menacing so quickly and seamlessly that it reminds me of Breaking Bad’s Gus Fring. His physical presence is astounding—not too many performers can simply just get up from a chair and demand everyone’s attention without a word. Fisk is going through an interesting transition, now being totally driven by his love from Vanessa: “love is the perfect prison,” he says, justifying his willingness to cooperate with the FBI for Vanessa’s safety.

Fisk takes an interest in Agent Pointdexter, who if you read about in our report on the NYCC panel, you know full well who he eventually turns into. You see, Dex is special, and clearly has some skills that are largely beneficial; but all of his life, people have been putting him down. Mentors, institutions, and other figures that he has trusted have all abandoned him for one reason or another. With that, Fisk begins to delve into Dex’s troubled psyche as a way to woo him. Imagine the Anakin-Palpatine dynamic in the Star Wars prequels, just without the piss-poor writing and acting of the Star Wars prequels. While the pacing of this relationship might have been rushed, the circumstances that led to its development actually make quite a bit of sense, and if the writing sticks the landing by the end of the season, it could be the most interesting thing to come out of it. 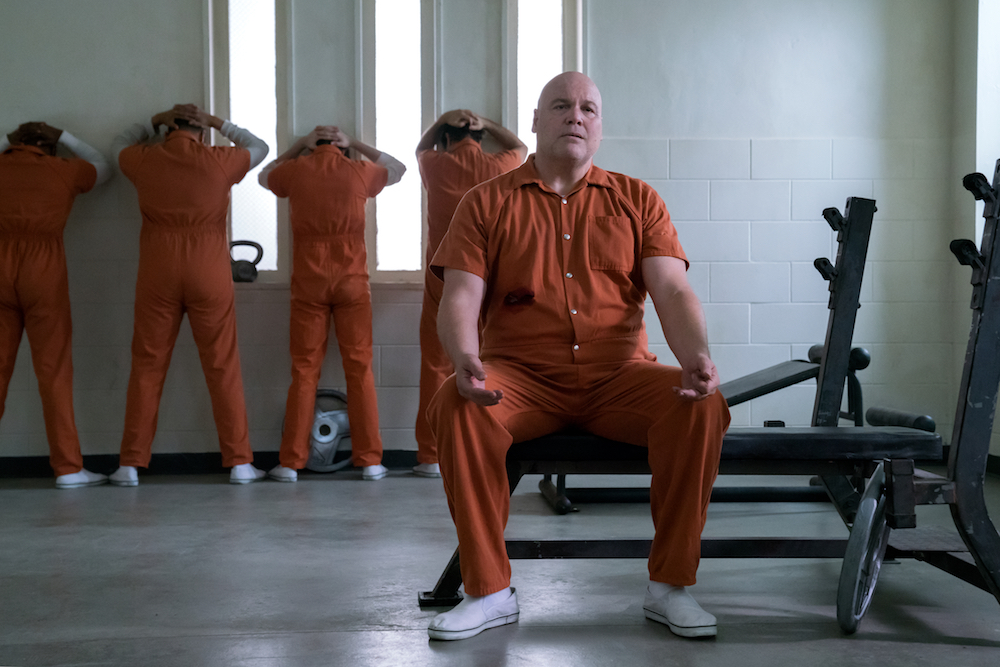 The defining scene of Daredevil, and perhaps the entire Marvel-Netflix portion of the MCU, is that hallway fight scene in the very second episode of season one—it was essentially a 3D version of the hallway fight scene from the original Oldboy. Ever since then, this show has been trying to top that scene, and what follows in season three is undoubtedly great from a technical standpoint. From another long take fight, to a sequence of Daredevil stealthily taking down enemies, the choreography itself is nothing short of impressive.

My problem with these action sequences is that they lack the same emotion as that very first hallway fight. See, that sequence came at the end of an emotional episode, and with Matt having the goal of saving a child, I felt heavily invested in it. The long fight sequence in season three packed a punch for sure, but it was solely to move the plot forward, and increasingly became improbable despite all of the cool flashiness. You’re going to have to wait until a later episode when Dex and Matt finally face off—I won’t spoil the details of the fight, but not only is it awesome as hell, but after watching all of this development from both characters, their first clash has so much purpose.

Daredevil is generally one of the more technically and artistically impressive shows from Marvel Television, and the same applies to season three. From lighting, use of color, camera movement, and overall set and production design, Daredevil is one good-looking show. There are a few times where the show tries to go a little further, one significant example being a black-and-white sequence in which Fisk does his due diligent research on Dex, and the environments from Dex’s backstory bleeds into Fisk’s penthouse. It comes across as a lesser version of something you’d see from Legion, but hey, props for at least trying to have some personality and visual flair.

Most of the creative decisions and changes made to Daredevil were the right ones. I had never actively disliked the show, but season two quickly lost steam to the point that Hand ninjas would pop out of nowhere, whenever the story seemed to have run out of ideas. While the beginning of this season may still be a bit slow, it pays off because characters like Matt Murdock actually learn and grow. There are fewer action sequences, but the few bits of action really do stand out. The show is furthering its personal relationships between characters, and grounding itself back in reality after the ninja nonsense from The Defenders.

Daredevil Season three introduces some interesting themes: what do you do when your talent is not recognized? How do you respond to everyone in the world pushing you down? The neat thing about this season is that both questions apply to both Matt and Dex, creating an interesting duality. Early in the season, Matt reminds Sister Maggie of the story of Job, who endured all of the sufferings brought on by the Devil by God’s permission as a test of faith. “Job was a pussy,” says Matt, who will no longer take the suffering. “I am what I do in the dark now. I bleed only for myself,” he says in his usual angsty way.

With that, I think of a fairly simple line from Maggie an episode later, one that comforted me in realizing that at least this show is somewhat self-aware. “I’m impervious to bad attitude.”