Plenty of indie films aim to be something Lynchian–a mix often combining surreal horror, melodrama, noir, and dashes of absurd comedy–by striking an odd mood or by adding splashes of the unexplainable to their own works. Often these attempts lapse more into experimental misfires than sweeping works of art.

From the opening bloom of its warbling, noir-ish score complete with a Lynch-like bit of screeching saxophone, Disappearance at Clifton Hill sets itself as something nodding to the master of the surreal. Its opening scene shows young Abby fishing with her family, the muted noise and heightened score adding a sense of abnormal anxiety. Abby comes across an odd boy with a bandaged face covering one eye. He’s suddenly and violently abducted, and Abby can only watch in shock. She returns to her family as they stand for a picture, but her eyes are sealed to a white car which carries the boy and his captors away. We’re left with the image of a dead fish hanging out of a bucket which feels something like a lost shot from Blue Velvet. From this moment the style holds you and binds you to its dreary dream.

As the film continues, director Albert Shin does a commendable job of capturing that Lynch vibe while adhering more to plot and character. It’s just a shame that the plot and characters weren’t given the proper time to develop.

In the city of Niagara Falls, Abby (Tuppence Middleton) has returned as an adult after a long hiatus. Her mother’s dead, and a Rockefeller-type family is looking to buy her hotel, The Rainbow Inn. This wealthy family’s fingers wind deep through every business in the city, and they’re used to getting exactly what they want. In a Chinatown fashion, of course, a shady land deal is only the start of this noir’s crimes. While home, Abby is forced to grapple with her own history of deceit while she tries to defy the land deal and uncover exactly what happened to that little boy who disappeared in 1994.

Niagara Falls is a wonderful setting with its casinos, wilderness, and tourist traps all hops and skips from each other. This makes the film’s overtures toward Twin Peaks with kitschy diners and oddball characters feel more apt and less like a crutch. The world and history Shin creates is one well plundered. David Cronenberg makes an appearance as a diver and historical podcaster who’s spent decades scouring the base of the Falls for trinkets and human remains. A pair of tiger tamers at the mystery’s core are referenced through warped and hammy VHS footage. There’s even a wheelchair-bound man attached to oxygen locked in a closet (which might be closer to Deadly Premonition than Twin Peaks, but that’s splitting hairs). This all works in Clifton Hill‘s favor. You’d expect at some point the Lynchatude would become overbearing and tip the film over the Falls, but it holds fast, grounded by its terrifically moody score and framing that soaks in every inch of Niagara Falls.

There’s a heart here that lives beyond a series of references to more famous works. The geography and history enveloped me and left me wanting much more in the way of weird Niagara Falls neo-noir. There’s so much left to unearth from its waters. This desire made my time with Clifton Hill feel especially short. I would have been happy to have spent more than two hours wading in its depths, but Shin fades to black at just over an hour-and-a-half, and the film is worse for it.

Though played with sympathy and energy by Middleton, Abby’s history of compulsive lies and deceit doesn’t play as heavily into the plot as it ought to. It stands more as window dressing, and when her lies finally reach a point in which they could rupture her relationships and leave her stranded and abandoned to solve the mystery on her own, the film’s already too close to the end. There’s no room to see her lies tangle around her or even obstruct her quest for the truth. Some great reckoning should occur, and yet there’s none.

The same could be said of the plot itself. There is certainly a torrid and perverse bit of sleaze at the heart of this disappearance, but it’s also very much what’s expected. It’s not especially twisty until its absolute end, holding a trope common for the mid-point of a noir back until just moments before the credits roll. This should be the point in which the wheels come off and we’re dropped head-first into a reality more shocking than what we were lead to expect. Instead, we get nothing. The ending feels like a cliffhanger meant to whet our appetites before next week’s episode, but as a standalone film all it offers is an empty shrug.

Not to mention that there’s a distinct lack of danger to Abby’s quest. Though the Lake family is a picture of power, perversion, and menace, we never get a good glimpse at this side. Charlie Lake (Eric Johnson) seems charming, if preppy. We’re told his family engages in crimes that rise as high as outright murder, but we never sense Abby suffer more than being banned from stepping into any of the Lake family’s properties. That seems… fine? Her fears seem existential, and there’s normally a point in which these fears turn very real for investigators. Clifton Hill comes off as incomplete. There’s a third act, an extra 20 or more minutes lopped off this film that I really wish was here. It’s so well lit, framed, and scored. It’s so immersive. Why end on such an anti-climax? I love its vibe, but its plot is lost.

Disappearance at Clifton Hill is by no means a waste of time, however. Its world is eerie and deep and well worth the plunge in itself. This vision of Niagara Falls is one you won’t want to leave. The only issue, then is how unceremoniously it kicks you out. 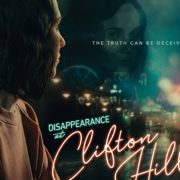 Disappearance at Clifton Hill is by no means a waste of time. Its world is eerie and deep and well worth the plunge in itself.