0
Spaceman says everybody look down

Another year, another epic sci-fi movie that rolls into theatres to rake up award nominations. Since 2013, there’s been a trend to release at least one big sci-fi movie that either focuses on scientifically accurate space adventures or a high concept premise that has a compelling execution. Movies in this illustrious group are Gravity, Interstellar, The Martian, Arrival, and Blade Runner 2049. Enter this year’s entry, First Man, with its unusual director, Damien Chazelle.

I make it no secret that I’m a huge Damien Chazelle fan. His previous two movies, Whiplash and La La Land, are some of my favorite movies of the past decade and boast fantastic characters, a great soundtrack, and some truly memorable moments. It’s because of this man that I now ask my movie and music friends if they’re rushing or dragging. It’s surprising to see Chazelle leave musicals behind in order to make a sci-fi biopic about Neil Armstrong, and I’m afraid to report that he really should have stuck to what he’s good at.

If you were expecting First Man to be anything other than a Neil Armstrong biopic, you’re going to be sorely disappointed. From beginning to end, this is a story about how Neil Armstrong began to work with NASA on the Gemini and Apollo missions and how he eventually becomes the first man to walk on the moon. There are no twists, no turns, and no subversions to the premise here. This is a movie about the moon landing with no frills attached.

On the surface, this kind of premise is right up Chazelle’s wheelhouse. In both Whiplash and La La Land, Chazelle focuses on telling stories about people with dreams, aspirations, and passions and how those desires affect the main character. In Whiplash, Andrew Neiman wants to become a better drummer, but he becomes obsessed with proving to his mentor how good he is to self-destructive results. La La Land has both our main characters wanting to become rich and famous, but they have to sacrifice so much to get to that point, most importantly their love for each other. For First Man, Neil Armstrong wants to get to the moon, but he has to bear the burden of all of those who died before him to get him there, not even sure if he’ll be able to make it back home.

The key difference between Chazelle’s previous work and First Man is that the audience gets to know the main characters. They can sympathize with them and feel for them when they achieve their dreams or sympathize for them when they fall flat on their face. First Man seems to keep Neil Armstrong at arm’s length away from us. We never really get to know him or what goes on in his mind, which hurts a movie that’s meant to be about him. He always just seems to be staring off into space, but his eyes seem to be glazed over with nothing going on in his mind. The worst thing a biopic can do is to make its star, the person the movie is trying to honor, boring. 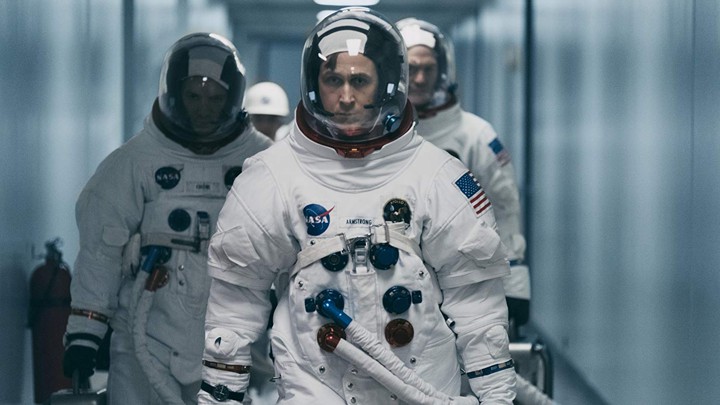 That isn’t to say the entire movie is boring though. The scenes where Neil is in space or manning a shuttle are nerve-wracking and exciting. It’s safe to say that whenever there’s a scene in space, something is bound to go wrong and I can’t help but tense up even though I know that everything is going to be alright. Contrast that to the quieter space moments where characters just take in the emptiness of the universe or how beautiful the Earth looks, which are just as effective as its chaotic moments.

But the movie falls apart whenever it tries to have its characters talk to each other. If it’s a scene discussing anything other than science jargon, it’s almost laughable to watch. When Neil is told that he’s going to be the commander of the Apollo 11 mission, he just says okay the same way that he would if someone complimented his tie or said that he uses a good brand of deodorant. There should be something, anything there, but there isn’t. The coup de grace is the fact that besides Neil Armstrong and Buzz Aldrin, who shows up in the last half hour of the movie mind you, I couldn’t tell you any of the other character’s names despite spending what feels like years with them.

It genuinely feels like this is more of a Christopher Nolan movie than a Damien Chazelle movie. Chazelle is known for injecting so much energy into his work, and Ryan Gosling, who plays Armstrong, is a very talented actor with a lot of range, but both of them seem to be on auto-pilot here, Gosling in particular. The humans are more robotic and lifeless than the space shuttles, but an ungodly amount of detail is spent on explaining every aspect of NASA’s mission to the point where we see such heart-pounding scenes like Neil Armstrong writing mission reports. Thrilling. All of this is shot beautifully, but a great looking movie doesn’t excuse the movie being the cinematic equivalent to Ambien.

I don’t usually harp about the length of a movie, because I believe that a movie needs to be as long as it needs in order to tell its story, but First Man feels like an eternity. Clocking in at two hours and 21 minutes, First Man needed a good trimming. There’s so much useless fluff that didn’t need to be included. About a half hour of the movie could have been cut from scenes that just happen and are never brought up again.

I wanted to like First Man. I really, genuinely, wanted to like it. As it is, this is a competent biopic about Neil Armstrong that doesn’t try to do anything spectacular. It goes through the motions and has enough wow factor that it’s probably going to rack up a couple of Academy Award nominations just by virtue of being a Damien Chazelle sci-fi movie. Watch Whiplash and La La Land instead.