0
The algorithm has spoken

It’s surprising to see a show like It’s Always Sunny in Philadelphia still on the air in 2019. Never one to shy away from controversial topics, the series has made a name for itself by featuring some of the “worst” characters ever committed to television. We’re talking vile, self-serving, disgusting beings that would have been thrown in jail numerous times by now. How that ever caught on is even a shocker, though I’m happy it did.

Still, you’d think 14 seasons of episodes would dull the edge that creators Rob McElhenney, Glenn Howerton, and Charlie Day conceived the show with. As culture has evolved and the standards of what are acceptable have changed, It’s Always Sunny still remains loud, brash, and offensive. Why fix what’s broken, after all?

A few episodes actually do offer some unique ideas, but most of season 14 is the same as it’s ever been.

As with past seasons of It’s Always Sunny, the typical focus points for episodes are parts of modern culture that many have grown to become annoyed with. Airbnb is one such area, with the first episode creating a nightmare scenario of the worst possible room to rent. Dennis (Glenn Howerton) and Mac (Rob McElhenney) rent out a space in their apartment with the hopes of getting some desperate woman to fall for them –well, mostly Dennis–, yet the tables get turned when it ends up she’s married.

What should be evident from that description is just how bold It’s Always Sunny still is. The social commentary might be a little light in this particular episode, but the writing is unafraid of pushing the boundaries of what’s acceptable. It’s also a scathing indictment of the types of renters that lie to their clients to make a quick buck. 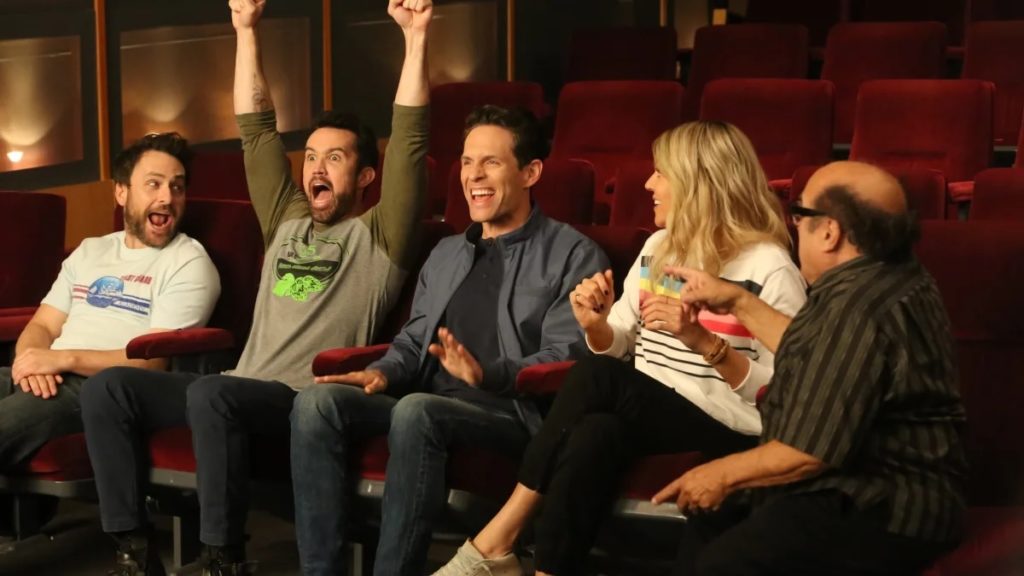 The hits keep coming, too. The very next episode sees the gang get accepted into a focus group screening for the upcoming Thunder Gun sequel. After watching it and becoming vehemently upset with “PC culture” ruining their favorite franchise, the real crux of the episode is revealed. Studios aren’t changing films out of fear of offending, but because no one is buying tickets anymore. By targeting a PG-13 rating, there’s a greater chance that kids can get in and won’t resort to pirating (something the gang is all about). Wouldn’t you know it, that revelation is completely lost on the gang and they still end up pirating the next Thunder Gun movie.

These are all funny ideas, but there isn’t any real common theme between episodes this season. It feels all a bit similar to the past. Season 14 does try to get experimental with some stories, though. The mid-season episode “The Janitor Always Mops Twice” is a take on film noir mysteries that is mostly a goofy story about Charlie being a detective. It’s a pretty solid episode with some very good acting, but it ultimately feels out of place among the rest of the season.

Another episode even promises to reunite the gang with the infamous waiter (Michael Naughton) from the past, but then fails to escalate the comedy above standard fare. Frank breaks into his house and attempts to join his family, but it’s mostly a tired string of setups and pay-offs that have already been mined with this guy. 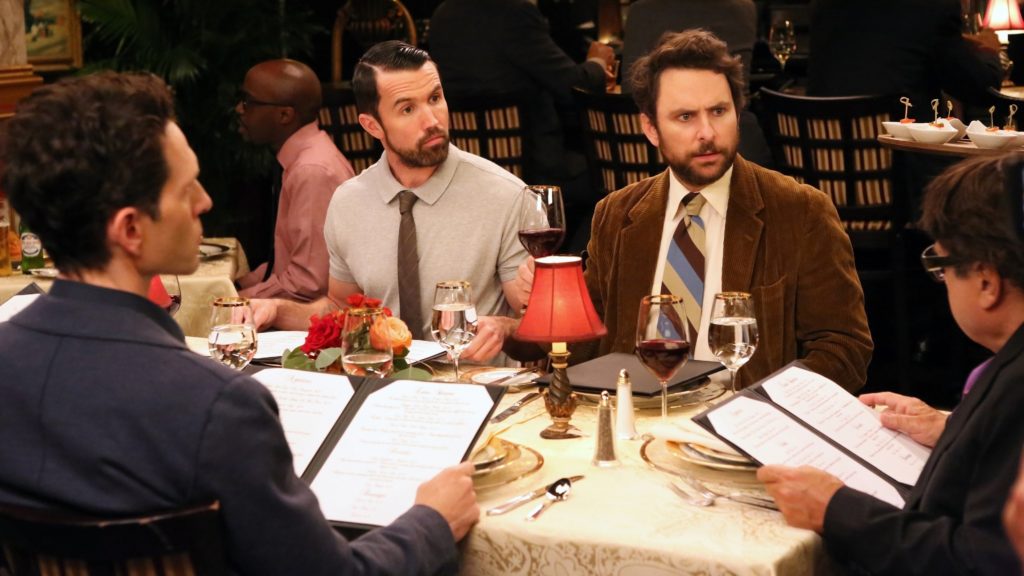 That could sum up a lot of this season, too. Nothing is outright bad (the episodes are actually a bit more consistent than last season), but a lot is just stuff we’ve already seen. It’s funny to watch the gang experiment with texting at a zoo, but there’s no devolution of their characters or insight into how they act. Dennis is still psychotic, Mac is still unsure of his sexuality, Charlie is a bumbling fool, and Dee is a walking monster.

At least the actors are firing on all cylinders again. I’ll never not be amazed at how perfect these performances feel. Jokes that fall flat even have great delivery, which ensures that you’ll remain engaged instead of tuning out. It’s a remarkable feat to embody a character so well that it’s hard to discern if anyone is even actually acting. I’d believe It’s Always Sunny was a documentary if you told me.

I also appreciate how despite being similar in setup, the comedy here is super dark. An episode toward the end of the season sees the pub shut down because some guy is threatening to jump off the roof. In trying to figure out a way to get the bar open, the gang’s algorithm determines that killing him is the best choice. Not wanting to actually commit murder, Rickety Cricket (David Hornsby) volunteers without even batting an eye. How is this even an episode of a cable TV program? It’s utterly fascinating. 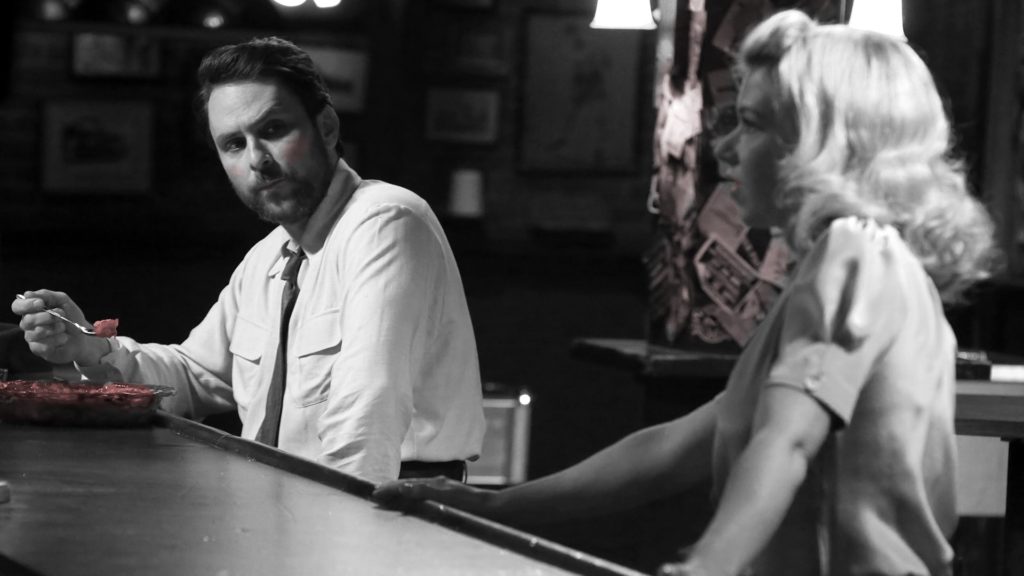 Even with the sometimes bland comedy, you can tell everyone involved is having a ball. Maybe the material isn’t as original or strong as it once was, but It’s Always Sunny has not lost its brand of shock humor as its gotten older. You can always count on the gang to continue pushing and prodding at TV censors, creating comedy that is hard to pry your eyes from.

FXX is currently undecided on if the show will return for a 15th season, but the final episode practically makes a declaration that the gang isn’t going anywhere. With it set to become the longest-running live-action sitcom in television history, I say why not have it come back? If you can keep being this outrageous into your old age, then you definitely deserve a continued spot on the airwaves.

Slightly above average or simply inoffensive. Fans of the genre should enjoy it a bit, but a fair few will be left unfulfilled.
6.5