0
Time travel has never been this original

Time travel is a sticky wicket for movies, and really all stories in general. There are just so many contradictions, loopholes, and moving parts that things get complicated. By the end of a time travel movie, you’re usually stuck asking more questions that don’t even pertain to the story as your mind desperately tries to make sense of the contradicting time loops and quandaries presented. It’s an issue that no movie up to this date has figured out how to solve. Looper figured it out.

About 20 minutes into Looper old Joe (Bruce Willis) sits down with his past self, young Joe (Joseph Gordon Levitt), for a chat. Young Joe basically tosses all the questions about time travel that the audience is thinking at the same time at old Joe. Old Joe sits there for a few seconds while young Joe rattles off questions until old Joe gets so annoyed he finally slams the table and yells that none of it matters. Young Joe listens and shuts up, and so does the audience.

I tell this little tidbit because it’s indicative of what Looper does so wonderfully throughout the film: developing a strong story and characters so that the hiccups in the plot either don’t matter or aren’t thought about. It’s nearly impossible to write a flawless time travel film, so instead of attempting to make everything fit together logically, which, for the most part, it does anyway, director Rian Johnson makes it all fit together emotionally. He beautifully constructs a story that keeps you guessing while setting its conclusion up perfectly. It’s a movie you walk out of discussing why the story worked instead of picking apart its flaws. What makes it work is that the ideas are just so much bigger than the minutia, provoking thought about what is going on with the characters and not the story itself. It also helps that in a sea of remakes, sequels, and adaptations this is one of the few original sci-fi/action films we’re seeing this year. And it is almost entirely original. Veering in and out of as many genres as it possibly can (gangster, chase, horror, sci-fi, action, drama, family) Looper tells an intense story that you haven’t seen before. In the near future time travel hasn’t been invented yet, but it will be in the further future. It’s illegal, however, and the only people who use it are crime syndicates. They use it to send people back in time to the near future in order to kill them since it’s become nearly impossible to murder someone in the far future and get away with it. You’re mind is probably already racing with questions about how things work, but remember to listen to Bruce Willis and just go with it.

Young Joe is a Looper in the past (our near future). Loopers are the people who do the killing for the crime syndicates in the far future. The syndicate sends someone back in time and the Looper shoots them and dumps their body after removing their pay. It’s a very wealthy life, but there’s one catch. If the Looper is still alive in 30 years they get sent back to be killed by themselves, thus closing their loop. Old Joe gets sent back, but Young Joe doesn’t kill him and things just start going downhill for Young Joe from there. The intricate and quite delicately balanced story is both too complicated to warrant explaining and far too good to spoil so I won’t go any further here. Needless to say, this movie will surprise you in many ways. What isn’t surprising is that Joseph Gordon Levitt is amazing and Bruce Willis is a badass. With the aid of some impressive prosthetics, Levitt channels Willis with a disturbing amount of accuracy. Levitt nails Willis’ facial mannerisms, especially his smirk, and scenes with the two of them together are eerily creepy. Willis on the other hand delivers one of those performances where it only sinks in later how truly nuanced it was. Few men can take a character who eventually mows down a small army with machine guns and turn him into an actual person. There are, of course, other actors in this film who do a great job, but it’s definitely the Willis/Levitt show until right up to the very end when a surprising level of bad-assnes erupts from an unlikely source.

I have specifically not gone too in-depth about Looper because it’s one of those movies that just needs to unfold in front of you. Talking about how well the story is constructed, the full plot, the detailed world and the major philosophical questions raised would simply make the film less enjoyable and interesting for anyone watching. This is a movie to walk into blind and then come out with your head spinning with questions. This is what happens when original ideas are allowed to grow to fruition in Hollywood, and it’s pretty much some of the best moviemaking of the year. 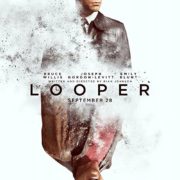 Definitely check this one out. It is highly recommended.
8.4

This is a movie to walk into blind and then come out with your head spinning with questions. This is what happens when original ideas are allowed to grow to fruition in Hollywood.

Peter Dinklage will play Toxie in the Toxic Avenger reboot