It’s been a long time since we last checked in on our abominable buddy Norm the polar bear and while I’m sure you all were waiting with bated breath, that wait is finally over. The franchise that just won’t die comes back yet again with another sequel that makes me question if we’re truly living in the darkest timeline. Now you might say that I’m a fool for constantly reviewing these Norm movies. They’re so consistently bad that only an idiot would actively seek them out for reviewing purposes, and… you’d be correct.

So usually with long running franchises that relegate themselves to VOD garbage heaps, there’s some logic behind them. Back in the early 2010’s there were a trillion Tinkerbell movies, but those made sense to me. Tinkerbell is a popular Disney character who fits in nicely with little girls. Cute fairy adventures, pretty colors, and stories about friendship. I understand that.

Why Lionsgate decided to turn Norm of the North, which was a 2016 January release that only made a moderate amount of money and once had a perfect 0% on Rotten Tomatoes, into a film series is a question that not even Freud himself could figure out. I mean maybe he could, but there would be a lot of sexual references to it and I’m still recovering from the fact that Norm procreated. But is the fourth movie better than all the ones that came before it? Could this movie be a high point for the franchise?

No, and shame on you if you thought any of the above. Hang your head in shame.

So given that my first ever Norm review was just giving a point-by-point summary of the plot and my second review was me just despondently remarking how I have nothing to work with, I am happy to report that there is plenty of material for me to work with this time! At this point I just expect the worst and while I can be surprised at an attempt at quality like last time, there was no attempt here. As a matter of fact, Norm of the North: Family Vacation seems to be almost intentionally bad, like the creators knew they were making garbage and just decided that only the biggest sado-masochists in the world would watch this crap, so might as well make it fun for them. This movie features, in no particular order:

Now, all of this is terrible in its own ways. It’s unfathomably stupid and the movie knows this. The characters frequently point out just how ridiculous all of this is. There are two narrators who are both diagetic and non-diagetic at the same time, commenting on events that only Norm knows about then reacting to them as if they’ve heard it for just the first time. Even basic plot points don’t seem to matter as Norm ventures once again to China for a waaaaaaaaaaaaaaaaaaaaaaaaacky adventure. Oh but this time China doesn’t look like China. It looks like the North Pole. Look, I know China has a lot of problems right now thanks to the coronavirus, the ramifications of their One-Child policy, the still ongoing protests in Hong Kong, but a second Ice Age isn’t one of those problems.

But you know what Norm of the North: Family Vacation does have, or at least attempts to have? An environmental message! Now if you’re like me, your first reaction to that was to cower in fear and plead for divine retribution at the thought of Norm of the North getting political, but even it manages to ruin that easy attempt at social commentary. The main conflict in this movie is that Norm loses his crown, which apparently is magical because it brings Spring to the North Pole. Yes… the North Pole has Spring… and without his magic crown, they will have an endless winter… in the North Pole…

Now, I actually had to conduct research just to see how dumb this plot point is. So it turns out that the North Pole really only has two seasons. It has a winter, which lasts for approximately nine months of the year, and a summer, which can last for three months. However, calling it summer would be a gross over-exaggeration because at its warmest, it can only get up to 32 degrees Fahrenheit there. Now, that number is steadily rising due to global warming, but the fact of the matter remains that Norm of the North: Family Vacation made me learn something only because of how stupid it was.

I’d be happy about learning something but, I’m still just trying to process that magic is now an active part of the Normiverse. Without Norm’s magic crown, blizzards reign, but they look like sandstorms, so what is even happening anymore and please someone send help.

This was meant to be a one-off joke! Ha ha, look at Jesse review a Norm of the North movie, but now I’m in too deep and I can’t get out! I’m pretty sure there’s some kind of psychological condition that I’m victim too where I can’t stop watching a poorly animated CGI bear eat fish, but that’s my reality now! Poorly animated kids movies! I even went onto the distributor’s, Splash Entertainment, website to see what the hell else they release alongside Norm of the North! My answer was one of the cheapest fitness shows I’ve ever seen, a magic frog/ninja show featuring the most over-it Mark Hamill narration I’ve ever heard, countless dog movies, and the infamous Wild Grinders.

I wish I can say I’m done, but that’s not the case! There’s a fifth movie coming out! My fate as a critic shall forever be inundated with Norm movies! I would rather watch the My Little Pony: Friendship is Magic movies and do an official ranking of them than ever see Norm 5. That’s including the ones where they become humans and the internet does less unspeakable things to them than when they were horses! I miss the days of the Norm cosplayer in the second movie. I don’t want to see what happens next. I don’t care about what happens next, yet I can’t stop. Norm of the North has become a passion project for me that I can’t escape from. I will die as the one mortal who attempted to seriously review each and every Norm movie. When I die, that is all that my contribution on Earth will be. Talking about a fat-ass polar bear with a magical crown who acts like a moron for 90 minutes while his poorly animated family and friends fart around, sometimes literally, while children in third world countries die of starvation, never to know love or kindness. While humanity suffers, Norm will endure, and I don’t know what could possibly be sadder than that fact. 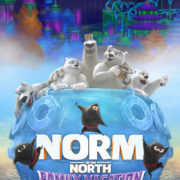 Do. Not. See. This. You will immediately regret doing so and can barely derive any enjoyment from it.
2.5

Norm of the North has become a passion project for me that I can't escape from. I will die as the one mortal who attempted to seriously review each and every Norm movie. When I die, that is all that my contribution on Earth will be.