0
A blast from the past

Biopics have come a long way in the last 20 years. What used to be extreme dramatizations of a person’s life have given way to more thoughtful looks at the humanity behind powerful figures. At our very core we are all humans and while some stars seem bigger than life, we all have the same wants, hopes, and needs that get us through the day. Maybe some viewers will see newer films as tarnishing the legacy of their favorite celebrity, but I appreciate the extra layer of realism when drawing comparisons to my own life.

I wasn’t sure what I had expected when sitting down to watch On the Basis of Sex, but I wasn’t prepared to see a biopic that feels like it was made almost 20 years ago. This is basically the equivalent of a film like Ray: it’s well acted, has nice direction and tells an important story, but tries to cram far too much into its short run-time to really do its subject matter justice.

On the Basis of Sex opens in the 1950s with its protagonist, Ruth Bader Ginsburg (Felicity Jones), attending her first day at Harvard Law School. Being set in the ‘50s, she obviously sticks out like a sore thumb. This is the era where women were still seen as inferior to men and this film happens to take place in the sixth year that Harvard even allowed women to attend its campus.

These opening moments quickly establish the core of this film’s thesis: no one should be discriminated against on the basis of sex. That is the platform the real Ruth Bader Ginsburg fought for her entire career and it is a prevalent theme throughout this movie. We get to see Ruth attend a dinner for the new students that acts more like an interrogation of the women present and see some snide remarks from her classmates trying to prove themselves superior to her.

Quickly this gives way to a moment where Ruth’s husband, Martin Ginsburg (Armie Hammer), falls ill one night and is then diagnosed with testicular cancer. The rapid pacing of these moments is probably meant to show how sideswiped the couple was with the news, but it happens so quickly and with little to no development behind either character that it’s a bit hard to sympathize with them. We at least get a couple of carefully positioned shots that use visual language to evoke emotion, but this is perhaps the last time the film aspires to a higher creative function. 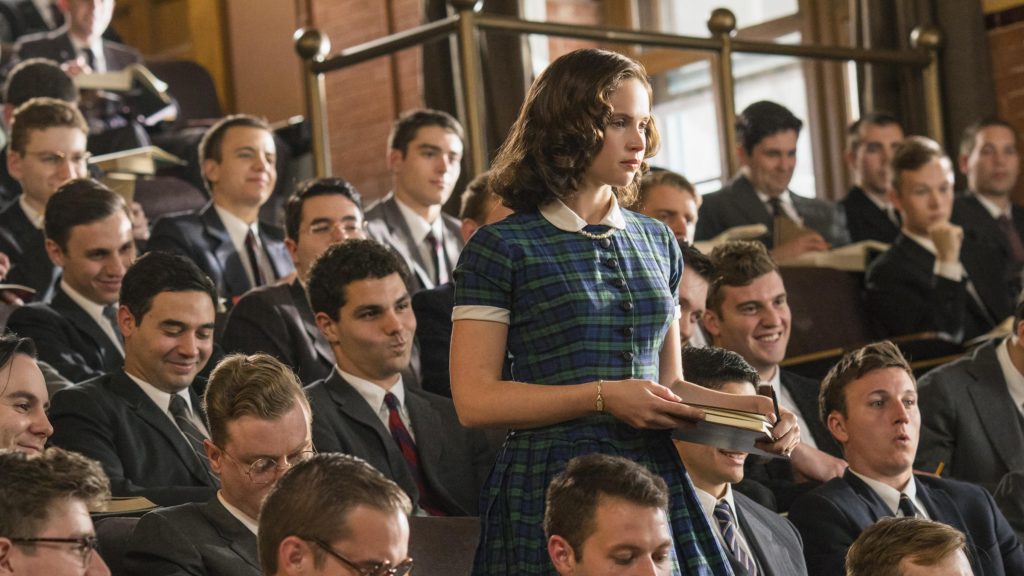 From there, the film proceeds to show how determined Ruth is with her schooling. She takes on Martin’s classwork and her own to see them both through law school, which is just an incredible feat. Sadly, there is only one scene with that before we cut ahead a few years and see Ruth transferring schools to stay close to her husband. Immediately after, the film cuts ahead another 20 years and my head began to spin.

I understand the need to establish a few basic character traits and show the oppression Ruth went through, but there is clearly not enough time given to these moments. With how dedicated the rest of the film is to the 1970s and Ruth’s eventual hearing in front of the Supreme Court, I would almost go so far as to say it should have begun there. While the universal language of film is, “Show, don’t tell,” I feel a little bit of spoken backstory would have done better to set the stage instead of rushing through Ruth’s earlier years.

At least with all of that out of the way, the film then begins to establish a clear tone and narrative. This isn’t a 100% serious story at all moments (a few comedic bits crop up to lighten certain moods), but the film adopts a tone that is just as determined as Ruth. It wants you to see just how much was going against the legendary woman and what lengths she went to ensure that all people were treated equally under the law. 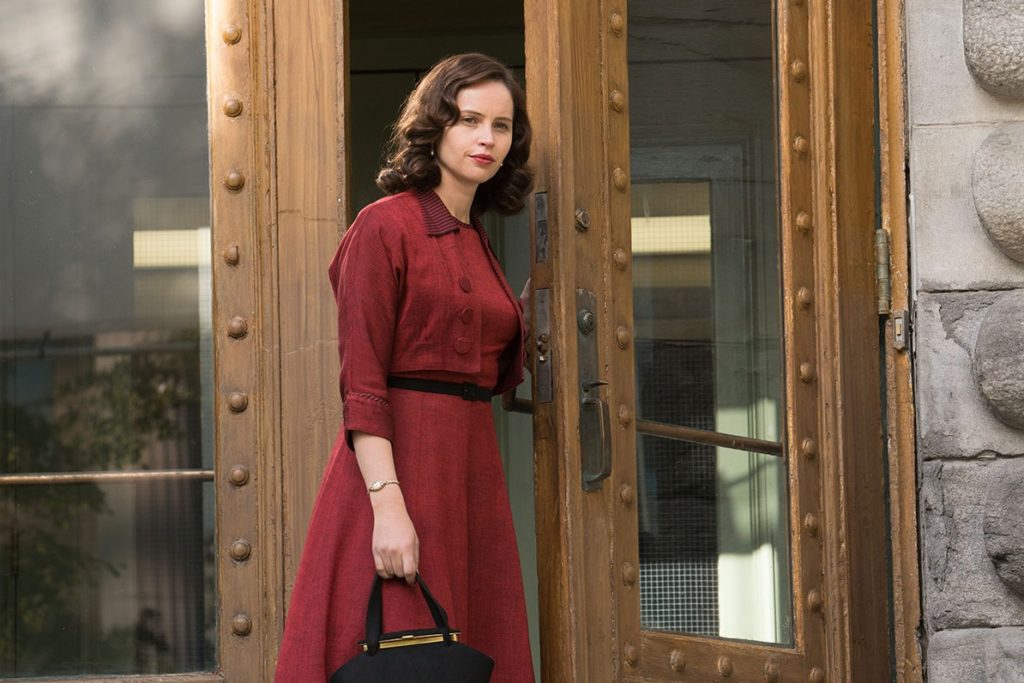 With Ruth becoming a teacher and getting impatient with how little is changing in the United States, her husband happens upon a taxation case that shows a reverse of the expected gender norms. Instead of the law claiming a woman can’t do something, it is actually stating that a man cannot take a tax deduction because he isn’t a woman. It’s clearly an assumption being made based on gender, which is exactly the first step the couple needs to overturning outdated laws.

The proceedings are then just typical biopic material. There are embellishments of the truth to heighten the drama of certain scenes, some anachronistic dialogue given to characters for comedic purposes and a rapid-fire pace that doesn’t give much time to develop the characters. Ruth is always shown as strong-willed and persistent, but the rest of the supporting cast mostly fades in and out as the story dictates.

At least the performances are all pretty solid. Felicity Jones does a good job in the lead role, adopting a pretty consistent Brooklyn accent and not shying away from showing the passion burning within Ruth. While she is typically composed, you can see the frustration brimming from her face during a mock trial where she is being thrashed by her colleagues. There is also a very touching moment where, believing she is alone, Ruth starts to cry out of anger. 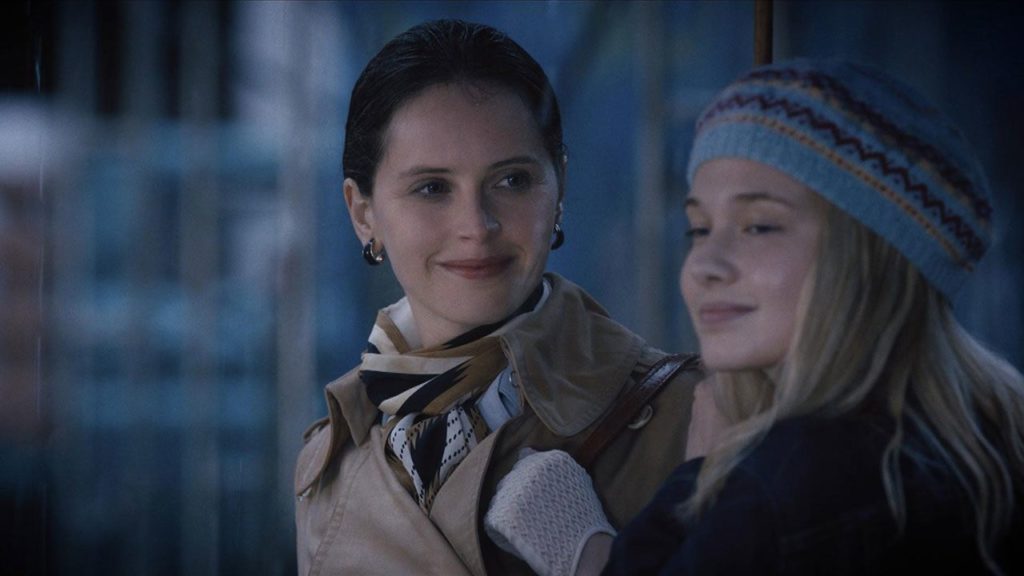 Armie Hammer is very strong as Ruth’s husband. Martin doesn’t have much screen time in the movie, but his best scene is in the beginning during his diagnosis. He and Jones share an embrace where Ruth is fearless and Martin is a sobbing mess and it does a lot to drive home not only how terrifying cancer can be, but how determined Ruth is. It’s too bad the film doesn’t do more to emphasize that over the course of the movie, but the single moment is captured well.

The supporting cast is solid if a bit forgettable. It’s nice to see Sam Waterston in a role that isn’t Law & Order and I’m surprised at how serious I can take Stephen Root despite imaging Bill Dauterive becoming a raging sexist. Cathy Bates is also typically excellent, but her role is incredibly underutilized. That’s really the biggest problem: there is a great cast here, but they don’t get the time to shine.

I could maybe accept this lack of focus on central characters if the film didn’t feel the need to clue us into the antagonist’s plight. While I’m sure the other side of the story would make for an interesting look at 1950’s bigotry, it doesn’t do much for Ruth’s personal story. It mostly takes screen time away from the characters that helped her develop her case. 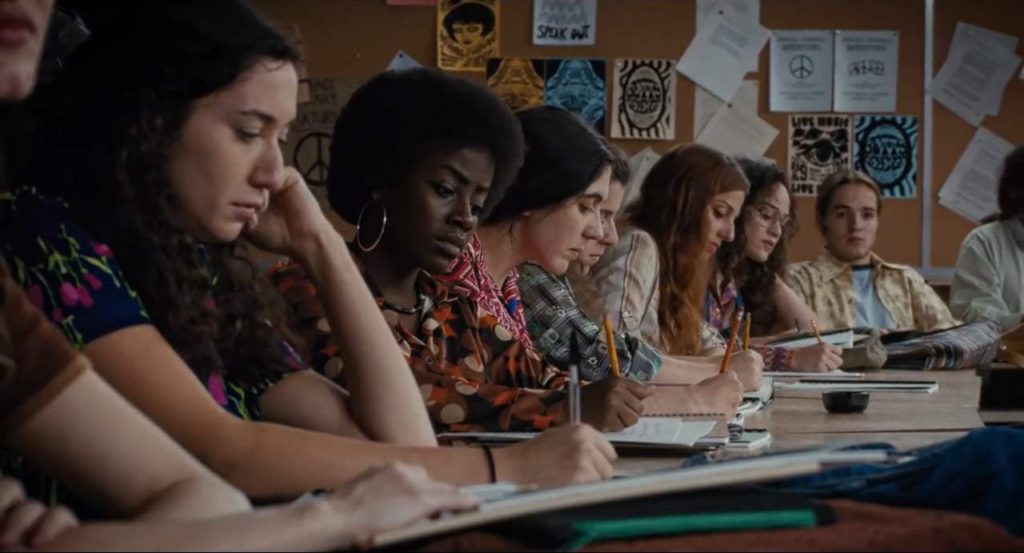 The antagonist is lawyer Jim Bozarth (Jack Reynor) and the film makes him out to be almost cartoonish in his hatred of women. Even if he really was that evil, there’s nothing done to humanize him or give him any development outside of the pivotal court scene. He is shown fighting for the chance to strike down Ruth, discussing his case to his superiors and then just appears in court seemingly ready to topple the Ginsburgs. There’s no discussion of his past, how many cases he had won or really anything to inform us to how big of a threat he was to Ruth.

When that final scene rolls around, though, the film definitely nails it. Apart from some eye-rolling shots of each lawyer looking at each other like a fighting game character select screen, this is an intense and well shot moment. There are close-ups on Ruth to show her anguish, sustained shots of the clock moving hands at an almost agonizing pace, reassured looks from Martin and even self-congratulatory boasting from the opposing lawyers. It’s probably another moment of embellishing the truth, but it certainly works.

Despite how powerful that scene is, the ending of the film just glosses over the actual outcome. In a move straight out of a lot of older biopics, text jumps on the screen to inform you of the result and then explain the next 40 years of Ruth’s life. While it may have been more important to showcase the court battle instead of the verdict, it misses a chance to let Jones and her supporting cast show off their acting prowess and further humanize their characters. 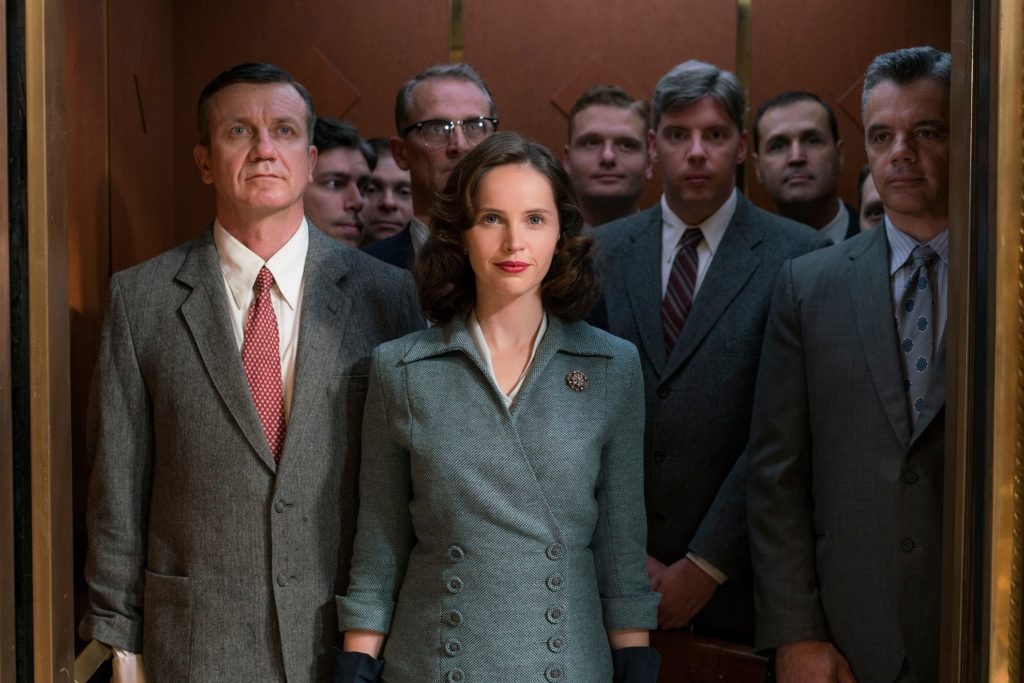 It also doesn’t end on any real conclusion. Maybe there was no way a film about Ruth Bader Ginsburg would ever be able to do her justice, but at least there could have been one clear story to tell here. It was a smart idea to center the story on Ruth’s first win in court, but at least make it a complete film instead of copping out at the end.

A lot of these issues are problems that are inherent to biopics in general. Real life doesn’t follow the typical mold set out by structured stories. In an effort to create a film that is easily digestible, certain concessions have to be made in a person’s tale. There is clearly an exceptional story to be told about Ruth Bader Ginsburg’s difficult battle to overturn sexist laws, but a Hollywood drama was probably not the best place to do it.

Ultimately, I can’t be too hard on the film. While it may be outdated in its presentation, the individual parts are done well. Felicity Jones is good and the film does get you sucked into the plight of Ruth. I wish there was more done to better explain each character and possibly some cuts to eliminate stereotypical drama elements, but On the Basis of Sex is a decent enough movie. This is a story worth seeing if only because the subject behind it is so extraordinary.