In 2016 Train to Busan did something that American cinema had been struggling to do for years. The Korean film delivered a fresh, original, emotionally powerful zombie movie that stood out amongst a sea of zombie copy cats. The film was tense, well-directed, full of characters you actually cared about, and, most importantly, delivered a story that felt like more than just zombies killing people. It still stands as one of the best zombie films made and probably will stay there.

Like all good movies that make money, the film now has a sequel. Well, to be more precise, the film now has a spin-off. Officially titled Train to Busan Presents: Peninsula, the movie takes place in the same world where Korea has been overrun by a zombie virus but features none of the same characters and is, in fact, not even in the same genre. It’s an interesting approach to a would-be franchise but while Peninsula doesn’t lack ambition it does lack many of the qualities that made the first film a classic.

Peninsula is pretty much the anti-Train to Busan. The first film was set in a confined space, lacked guns, and featured a small core cast in a film that was strictly a horror/thriller. Peninsula goes in the exact opposite direction. Set four years after the first movie, the entire peninsula of Korea has been abandoned by the world, with everyone there assumed dead. Jung Seok (Dong-Won Gang) and his sister’s family are on the last boat of refuges out the country but he and his brother-and-law find themselves depressed and alone in Hong Kong after his nephew and sister die on the boat during an outbreak.

A crime lord the pair are caught up with, however, discovers that there is a truck with millions of American dollars just sitting in downtown Busan. The pair, along with two other Koreans, are tasked with going in and retrieving the truck with the promise of splitting the money. Desperate, the group agrees and snakes into Busan only to discover a band of crazed military soldiers still alive and running around. Jung eventually ends up rescued by Min Jung (Jung-hyun Lee) and her two daughters, who are living with their grandfather. Nothing goes to plan, of course, and the small group has to fight their way out of the city and get away from the gang of marauding ex-military. 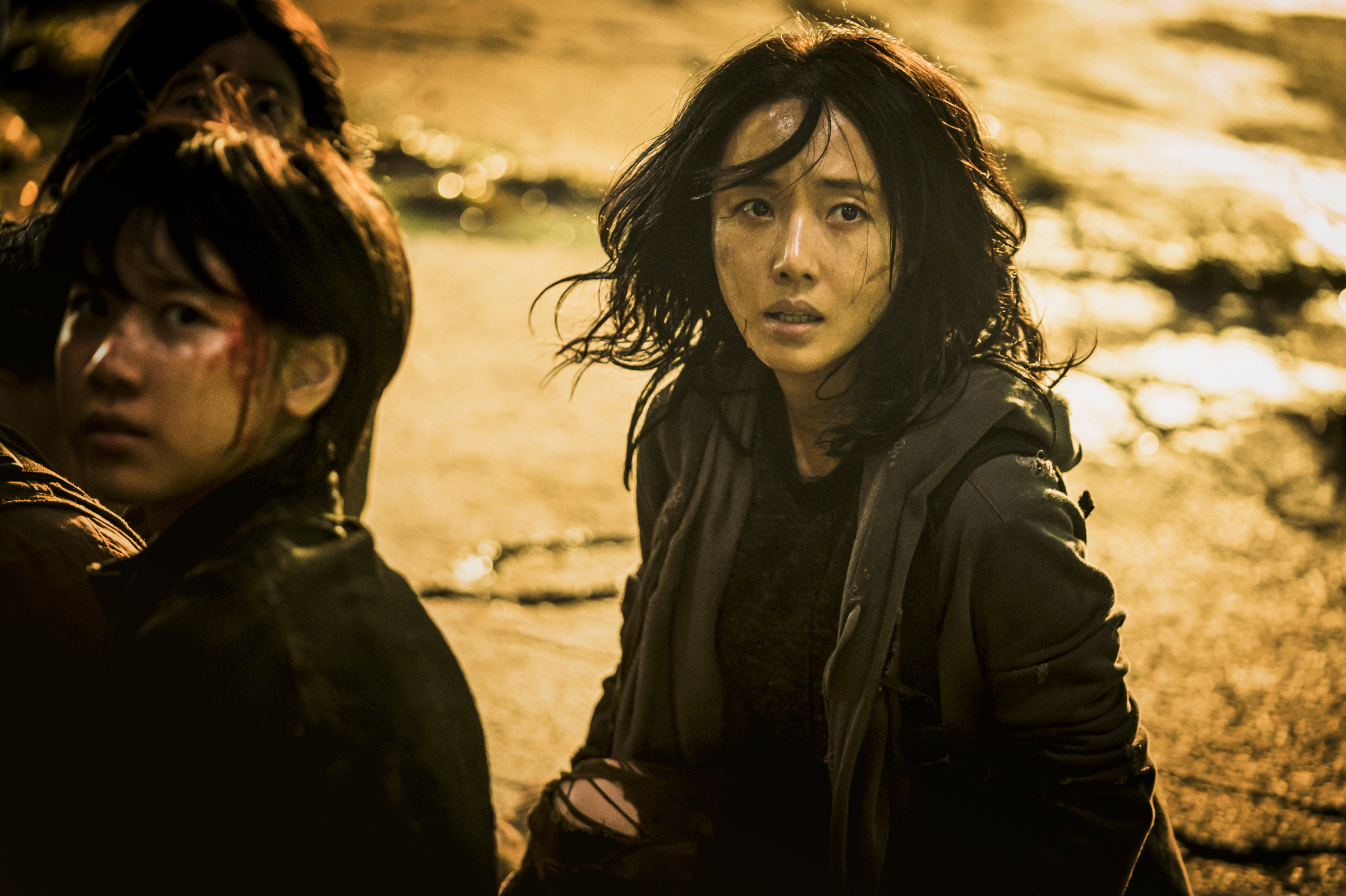 As you can probably tell from the mention of military and the word fight there is a ton of action and gunplay in this movie. Jung is basically an elite commando-style guy who headshots every zombie he sees. Meanwhile, one of the daughters is an expert car driver and the military faction all have Mad Max-style cars to speed around in. What this results in is a movie that is all action and little substance; a bit, bold zombie action flick that concludes in a brazen ten-minute chase sequence through zombie-infested streets. There are copious scenes of zombies being driven over and whacked around by cars like rag dolls and plenty of shoot outs between humans too.

None of it doesn’t work but it’s hard to say it’s anything special. The film feels like a low-budget action movie and despite its best efforts can’t find the emotional punch the original landed. Jung’s uber-solider character can’t deliver the same connection as the first film’s every-man protagonist and the family dynamic in this movie feels more forced. It also doesn’t help that the action itself, while creative, is not handled as well as it could be. The CGI is a bit dated and Sang-ho Yeon doesn’t quite have the same touch for big car chases as he did enclosed spaces. 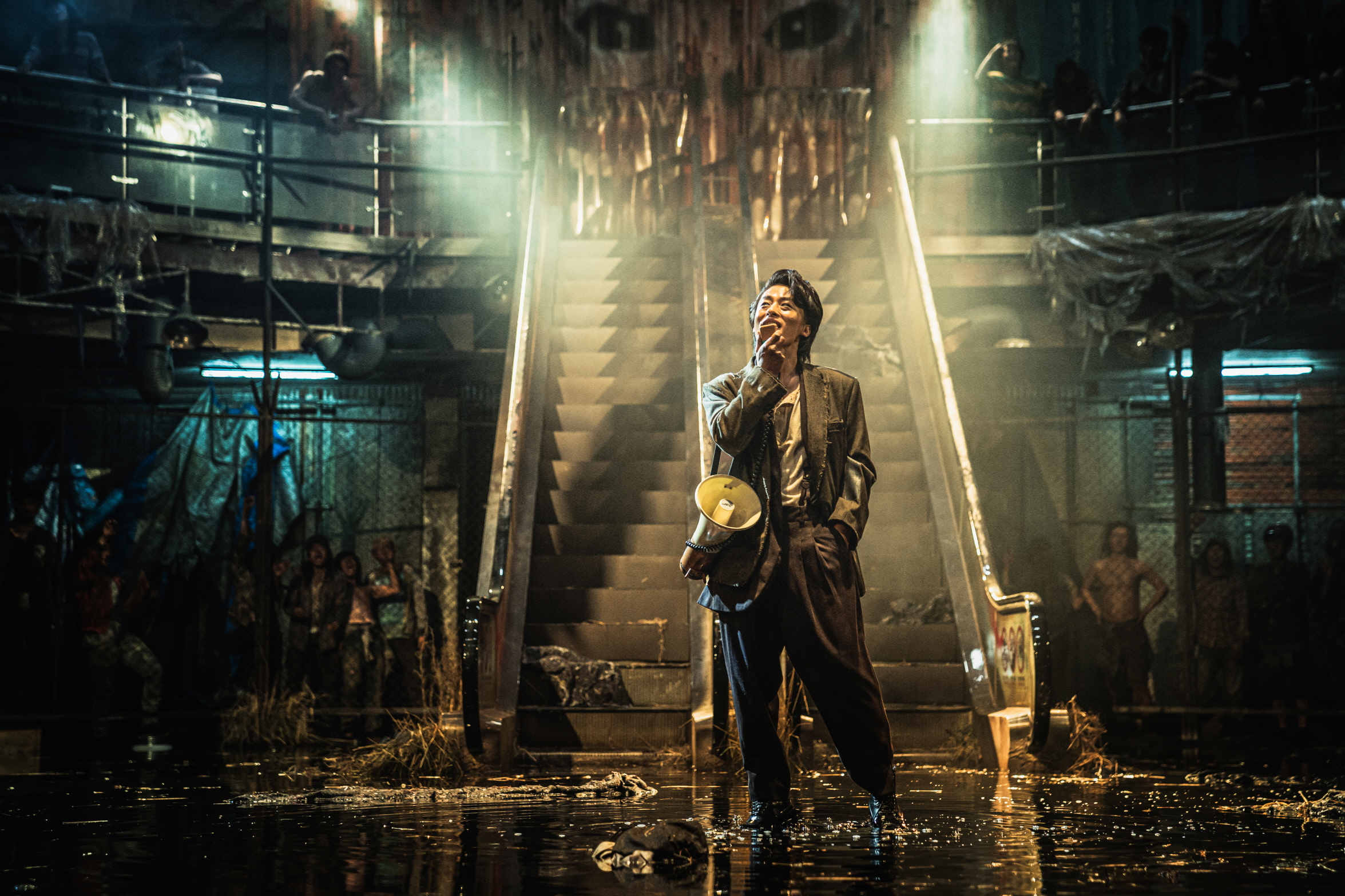 The movie tries to deliver some high-concept ideas, especially when it comes to Korea being left alone but it’s so obsessed with doing the next “cool” thing that it can never dig into anything. For instance, at one point one of the characters is thrown into a gladiator-style fight ring with what can only be described as a zombie version of a rat king. It’s a cool idea but the film does nearly nothing with it, instead cutting around the pile of zombies as humans run for their lives. To be fair, some of the film’s moments are awesome and payoff but they’re so hit and miss that it never rises to the level of being great.

The movie is definitely flawed in its execution but it functions well enough on the whole for a zombie action flick, replete with slow-motion runs and cars flipping over. The problem then is do we compare it to its predecessor, which would cause it to be described as nothing but a failure. Yes, you can transition from horror to action in a franchise as Aliens did for Alien but your action movie better be fantastic then. Peninsula is not and it makes the transition feel like a bad idea, instead of a clever genre shift.

As far as action flicks go Peninsula is passable and it should get some credit for how big, bold, and brash it is. However, when you go that direction you better make damn sure you can pull it off and the film just doesn’t. While the action can be fun it never rises to the level of truly great and that makes the movie’s lack of a soul truly stand out. There’s bound to be more films in the Train to Busan franchise. No matter what genre they land in, hopefully, they can rise to the original’s quality. 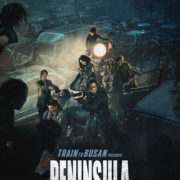 The white bread of cinema. There is nothing good or bad about this movie.
5.8

Peninsula goes bigger in every way possible and yet the end result feels smaller. The action is decent and there's an OK concept behind it but the film, on the whole, feels like a letdown.