Depending on who you ask, biopics can be the bane or bliss of a moviegoer. A little historical whimsy, embellishment of fact or two; sweeping, operatic historical fields, a little romance, and we all learn something in the end. Like a favorite meal, you get what you expect.

Marie Curie would certainly seem to be a terrific subject for a biopic, ticking the boxes of possibility for nuanced character adaptation, historical importance, and contemporary relevance. Radioactive, directed by Marjane Satrapi, stars Rosamund Pike as the Polish-born scientist whose pioneering work with uranium and other radioactive elements would fuel decades of scientific innovation. But while the innovation that Satrapi and her crew employ in telling Curie’s story might be of interest to those tired of the tried-and-true turns of the biopic sphere, the film suffers from being too little of too many things, neither an easy pill to swallow nor a vibrant concoction of wild elements.

Radioactive chronicles Marie Skłodowska’s work early on, her relationship with Pierre Curie (Sam Riley) in France turning to marriage, resulting in the two forming a power couple of scientific research. It’s in this stage of the film that much of the proceedings feel pedestrian if enlivened by a mostly-good production and ample performances from Pike and Riley, though there’s something a bit obvious to Marie’s distracted and blunt work ethic, or Pierre’s suave courting. It can feel a little familiar, if inoffensive.

Where Radioactive diverges from its retelling of Curie’s life is the frequent, bizarre leaps through time and space that chronicle the history of radioactive energy, mostly as a tremendous, uncontrollable power. We cut to the dropping of the Little Boy bomb on Hiroshima, as well as a Cleveland hospital’s use of X-rays on a young boy in 1957. The other episodes of flash-forwarding I won’t spoil, but suffice to say that they are just as, if not more, out of time with Curie’s work in the early 20th century as the aforementioned ones. The idea of creating an analysis of radioactive research by way of historical fiction is something of a fascinating idea for a film, centuries of yet-to-be-realized guilt weighing upon Curie… Yet Radioactive never quite gets that weird. 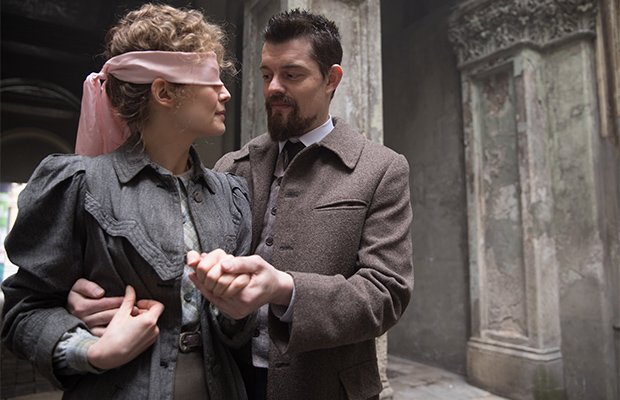 This is very much a biopic, though one that increasingly submits to surrealistic flourishes that ultimately distract from telling a coherent story, or painting a factual portrait of Curie’s life. The fact is that Curie simply wouldn’t know about the use of atomic bombs dropping (having died in 1943), or have any real firsthand concept of the ways in which nuclear meltdown would destroy lives. The film saddles its subject with traits that, it would seem, don’t belong to her, doing so through the blunt, extradiegetic means of simple editing to unrelated scenes.

In the wake of HBO’s 2019 miniseries Chernobyl, the depiction of severe mutilation and bodily deterioration as a result of radioactive exposure has seen something of a new cinematic standard set; that series makes the effects of radiation on the body a horrifying, deeply disturbing, and almost black magical thing of mystery and terror. While Radioactive shouldn’t be faulted by comparison to another work, the strength of Chernobyl helps illustrate what Radioactive lacks: Focus. What starts as a simple biopic on Curie weaves in elements of surrealism and gruesome confrontations with the implications of her uranium research. Toss in some marital strife, Curie’s fierce independence and strong promotion of women’s rights, and some mommy issues (both Curie’s own and her daughter’s) and you’ve got a heck of a lot of material to cover in a film that runs under two hours. 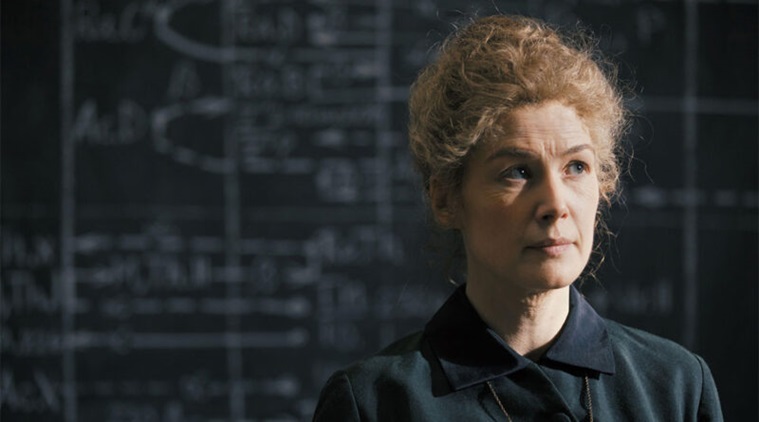 In juggling so many subplots and styles, Radioactive unfortunately buckles under its own weight. The aforementioned episodes regaling us with the sort of cautionary tales of Curie’s work suffer visibly in their aesthetic, their scripts playing like TV ads at best. And tropes that roll out of the film never seem to stop (hallucinatory conversations with the deceased, neat-and-tidy application of good parenting to resolve a strained relationship). Radioactive looks to tell the story of a pioneer while playing its cards too close to the chest.

Not a complete failure by far, Satrapi’s film simply finds itself being too loyal to the routine of its genre, the occasional, radical stylistic flourishes like Marie’s trancelike fixations and the vibrant, surreal colors of glowing elements come across as simply out of place. 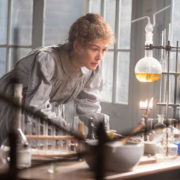 A meager biopic seemingly at odds with itself, Radioactive exhibits a desire to inject elements of surreal and existential style into a routine biography, but ultimately finds itself neither committed enough to its flair nor entertaining enough in its familiarity.

Wonka, a prequel to Charlie and the Chocolate Factory, is in the works