There probably isn’t a more recognizable movie formula than the one in Disney animated films. They take familiar stories, myths, and general concepts, create a light-hearted story with some basic virtues and life lessons, and probably throw in some musical numbers and dead parents. I’ve usually been lukewarm towards Disney’s recent computer animated efforts, but I have to admit that Wreck-It Ralph won me over. I was definitely worried about the sequel, Ralph Breaks the Internet, yet somehow, someway I ended up liking this film even more.

My worry before I actually sat down to see it was that it might not actually be about anything. While we’re on the subject of basic virtues, the first movie was about having a sense of belonging and breaking out of your roles and habits, while also being a familiar tale of what it means to be a hero. Disney doesn’t usually make theatrical animated sequels (most of those straight-to-video sequels and prequels are garbage and don’t count), and from the trailers, I was afraid that this film would be a shallow effort to double as a Disney rendition of Ready Player One.

However, Ralph Breaks the Internet affected me emotionally at a similar level that many classic Disney animated movies do. The movie houses a really great story that has the potential to teach young, developing children how to deal with toxicity in close friendships.

The friendship between Ralph (John C. Reilly) and Vanellope (Sarah Silverman) drives every single aspect of the film’s plot. Six years after the first film, the two have reached a fun daily routine, but Vanellope is beginning to feel the repetition. Wanting to live up to his title as Vanellope’s best friend and hero, Ralph attempts to make things better by building a new track in Vanellope’s Sugar Rush arcade racing game, and while it is fun in the short term, Ralph’s actions inadvertently cause the arcade game’s steering wheel to break off, leading to the unplugging of the game and forcing all its inhabitants to abandon their home.

I was already surprised by how much I was able to chew on from the get-go. The well-written dialogue is able to convey a very real and relatable back-and-forth feeling about the monotony of daily life—Vanellope wants something new and fresh, but now without her game, she has no routine to depend anymore, leading to aimlessness and depression. Not to mention, the loss of the game is a very explicit metaphor for homelessness and unemployment.

And because Ralph sees himself as the best friend and hero, he takes Vanellope on a journey, via the arcade’s newly installed wi-fi, and into the Internet in a quest to somehow retrieve a new steering wheel from eBay. Again, I held concerns—I was afraid that this would then turn into The Emoji Movie. Save for a few moments and some gripes, I was impressed.

As nice as they were in the first movie, I was happy that supporting characters Fix-It Felix (Jack McBrayer) and Calhoun (Jane Lynch) are sidelined for the most part. Nothing against those characters, but the fact that the film never cuts to their subplots and instead features either Ralph and/or Vanellope in nearly every single scene gives the film non-stop momentum. In their place are some new video game and internet-based supporting characters.

These new pals provide some fun personality quirks and vocal performances, with the cast of characters including Double Dan (Alfred Molina) as basically a spammer from the dark web, impulsive autocorrecting search engine KnowsMore (Alan Tudyk, a staple in modern Disney animated films), and BuzzTube (a fictional YouTube competitor) algorithm, Yesss (Taraji P. Henson). We also get a whole group from Slaughter Race, a grimdark, brown, fictional online racing game that felt like a cross between Twisted Metal, Mad Max, and the Fast & Furious films. Led by Shank (Gal Gadot), this game presents both a neat little car chase scene and an interesting story dilemma. Vanellope, wanting some variety in her life, is attracted to the freedom provided in Slaughter Race—not to mention that it’s an online game that receives constant updates.

That aspect of comparing older arcade cabinets to evolving online video games is a clever tool in the film’s depiction of the internet, but to be quite honest, the film isn’t that creative with everything else. Interpreting the internet as a physical space sort of puts you in a corner, as everything will resort to the first, and probably only, idea. eBay is a space for auctions, Twitter is represented by bluebirds chirping out cat pictures on a large tree (and not by a giant cesspool of screaming people), Instagram is an art gallery, and so on. Product placement in films can be annoying, even if it does make sense in a movie like this. To nitpick, however, I was confused about why “BuzzTube” is used when YouTube is mentioned and seen in the film. But to give the film credit, Ralph Breaks the Internet gives the information superhighway (which along with “world wide web” was thankfully never said here) a nice, futuristic, clean, tactile feel—the ideas may not be original, but at least everything looks nice.

To summarize that part, it’s more literal in an Osmosis Jones-sense and less abstract and wild like Inside Out. 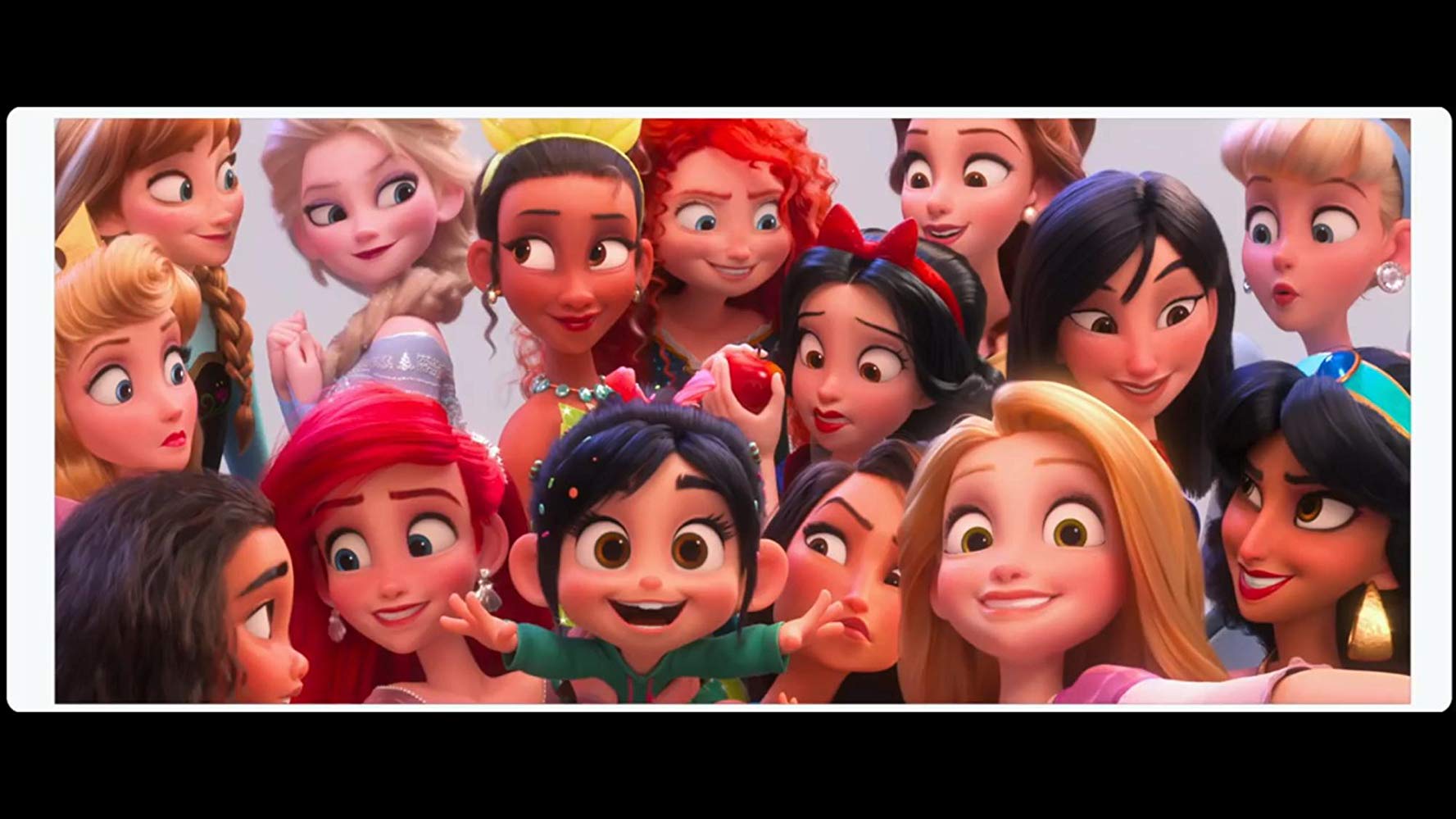 I do wish, though, that the film spent more time dealing with internet toxicity and cyberbullying, as this film is an opportunity to impart life lessons about those issues to children. Of course, I didn’t expect the film to depict Reddit, 4chan, or any civil discourse you would see on social media, and there definitely weren’t any references to porn here (unless I missed something super subtle—Disney can do this sometimes). Besides a really, really, brief scene involving a BuzzTube comment section (the virtue taught here was “don’t read the comments section” and “only care what your friends think”), Ralph Breaks the Internet totally dodges online negativity. In this bright metropolis of the internet, there are no dark alleys in between, and no skeletons in the closet from real-life problematic online institutions.

The film has an extremely optimistic and utopian view on the internet—seeing it through the eyes of Ralph and Vanellope makes it seem new and magical, where all your needs are met. While I wish that the film took some more responsibility in reminding kids that there are bad things online that aren’t just in the “deep web,” I also get that Disney probably wouldn’t want scenes with Neo-Nazis yelling on Twitter or an Alex Jones parody on BuzzTube, or whatever. Instead, what we get are numerous references and jokes about online memes. Your mileage will vary with these—I found some gags to be quite funny, while I imagine that people will cringe at others. I heard some people groan when Yesss showed a BuzzTube clip that showed a split second of a Fortnite battle bus. And yes, Ralph flosses in one scene. With so many mentions of cat videos, the film feels like a collection of every joke from and about the internet from the past decade, now in a mainstream Disney film.

Speaking of Disney films and references, there isn’t too much to talk about the “Disney fansite” sequence in Ralph Breaks the Internet, since, despite being a focus in trailers, it takes up so little screen time in the film itself. It’s relatively inoffensive, and fans of Star Wars, the MCU, and Pixar will perhaps get a small chuckle and smile from the handful of jokes these universes present. The musical score by Henry Jackman actually blends in musical themes and styles from these other properties quite well during key moments. The Disney Princesses scene is a fun watch, albeit one spoiled by trailers already, like the moment where these princesses (almost all of them voiced by their original voice actresses) basically deconstruct the gender roles, tropes, and story formula of classic Disney films. Way to stick it to yourself, Disney? While the scene felt out of place at first, they do give Vanellope some essential advice that drives her motivation for the rest of the story.

And that brings us back to the main theme of the film. Amidst all of the internet nonsense, the very core of the story, as mentioned, is the friendship between Ralph and Vanellope. They are of course already best buds after the end of the film, but their relationship is challenged by a very real and relatable scenario. Ralph is comfortable with the routine of the old arcade while Vanellope wants to break out into something new. What happens when two friends have these conflicting feelings? Is Ralph, as the best friend and Vanellope’s “hero” entitled to anything from her?

Without giving too much away about the final act, the film cleverly tackles mental health in close, interpersonal relationships, namely the insecurity of individuals that hamper these relationships. This insecurity may cause one of the parties to force security, trapping the other into staying in the friendship—which as y’all should know, is unhealthy and bad. Conflicting desires eventually lead to sabotage, but thankfully, the film veers away from any of the characters straight-up gaslighting each other. The story also utilizes Vanellope’s chronic “glitching” in an interesting thematic way—I always thought that it was a metaphor for disability in the first film, but when the theme of insecurity arrives, it turns more into a metaphor for anxiety. And no, I’m not looking too much into a “kid’s movie,” because the characters literally talk about most of this stuff. I really appreciated how the film handled this, and without airing out my personal history for the sake of your sanity, I wish I had it when I was a kid.

What results is a Disney film that slightly differs by having its virtues about the micro rather than the macro—Ralph Breaks the Internet doesn’t have much to say about the internet, and by extension, society at large. It isn’t about conformity, acceptance, or the like, but rather just about how two people can be respectful and friendly towards each other. While many references may not age well, the universal personal themes will remain timeless. Ralph Breaks the Internet won’t make everyone laugh out loud constantly (dare I say “lol” in a professional review), but audiences may be surprised by how deep it is by the end. Just prepare yourself for when the movie turns from “ha, the internet is so weird and quirky!” into a group therapy session.