I’m not sure why, but I was kind of thinking that Skyscraper would be something special. Not like, “good” special, but just some sort of low-key, fun action flick that riffed a bit on Die Hard and The Towering Inferno. I mean, it basically is those two movies crammed into one, so expecting a bit of dumb, summer fun shouldn’t be that much to ask when you’re cobbling together two classics and have Dwayne Johnson starring.

Unfortunately, the filmmakers didn’t seem to know what kind of movie they had on their hands, playing it as straight as the building it takes place in, instead of ramping up the camp factor. Skyscraper plays into every trope in the book, replete with an incoherent set up to a hall of mirrors shootout. It’s painting by numbers at its illogical worse, and while some of those paintings can be fun, they’re mostly just dull.

The Pearl is the tallest building in the world. Built in Hong Kong, the massive building is going to open its residential floors soon, including a 30-story indoor park. However, before that can happen, the insurance companies need the building to be checked out by an independent contractor to make sure it’s secure. Will Sawyer (Dwayne Johnson) is that contractor… and also an ex-military, ex-cop super soldier, because dems the rules for action movies. Sawyer brings his family to Hong Kong and they’re the first people to stay in the residential part of the building. Everything is going great until evil, generic Eastern-European men attack the building and light it on fire. Sawyer must then rescue his family, save the building’s owner, Chin Han (Zhao Long Ji), and kill the bad guys. It really is just Die Hard and Towering Inferno mashed together in the most blatant way.

It’s pretty clear from the get-go that the movie wasn’t actually made for American audiences. It has plenty of the standards of an American blockbuster from 15 years ago, which is what sells in China now. Big-name stars and straightforward action like you’d find in action films of the ’90s and ’00s still sell in China a way that they don’t in the U.S. and that’s exactly what this film is. There’s also plenty of Chinese stars in the cast and a solid chunk of the dialog is subtitled Chinese. This style of action film may be passé in the West, but for the Chinese audience, I think the producers knew exactly what they were doing. 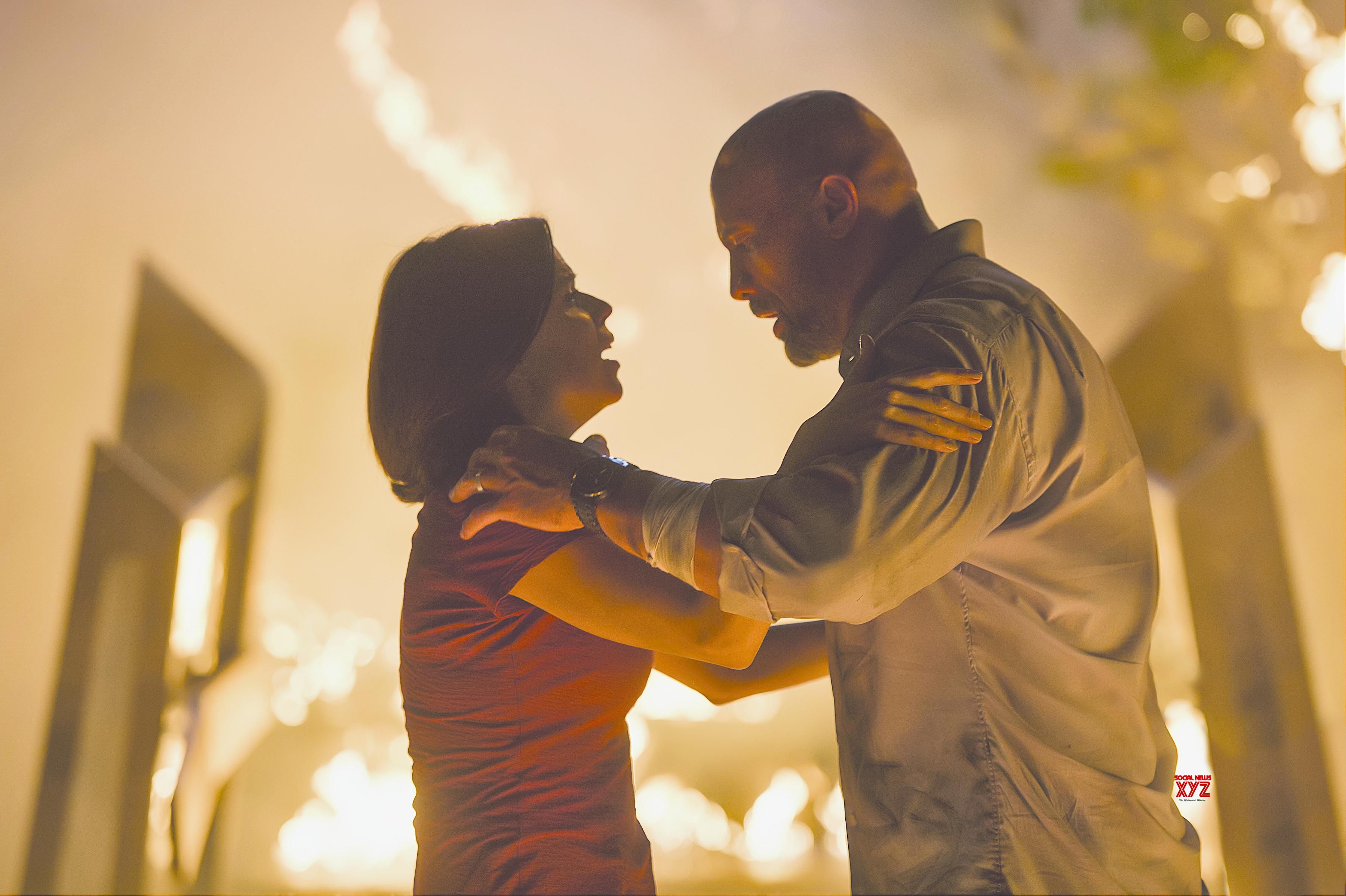 Everything is very straightforward. Get from A to B without too much thought or logic. Movies like this can work, and Skyscraper does function overall. If you accept the fact that the entire premise is stupid, then there aren’t any massive plot holes, and its action can be tense at times. Nothing is ever good, but there’s not enough bad to make the movie really stink. It plays with Johnson like he’s an indestructible action figure, throwing him around the building and blowing him up left and right, which is fun. The problem, is it’s never all that interesting fun. There’s no moment of amazement with any of the action. Even the crane scene that the trailers tout is pretty tepid and full of illogical inconsistencies.

Well aware of how paper-thin their plot is, the movie is incredibly short for an action film these days, coming in at only 102 minutes. The film never overstays its welcome, but it just never feels that welcome in the first place. Aside from Johnson’s character, no-one moves out of the realm of caricature. That can work if the movie plays with it, but Skyscraper is so straight-faced about everything that you can’t have much fun poking holes in it. It seems to want to be the exact opposite of the movie it is, losing a lot of what could have made it enjoyable to watch in the first place.

I will give some props to Johnson for managing to elevate pretty dumb moments into a bit of entertainment. He has the charisma to make you care even when you shouldn’t. I’ll also give the film credit where its due in making Neve Campbell’s character into more than just a hostage, giving her a military background and having her kick some ass here and there. In ways like this, and in a few moments of actual tension, the film pulls itself up and becomes a bit of dumb fun, but there’s too much dumb – and not enough fun – to make it worth the time.

Skyscraper is a movie made by a committee to sell to a very specific audience. There’s nothing that great about it, but I’ll admit that there isn’t anything that bad about it either. It’s short, dumb, and features middling but approachable action. Like finding yourself in the middle floor of a tall building; it’s not the best view but at least when the terrorists come to take the building hostage, you’ll be able to get out quickly.