I cast a level 3 chill out spell to cool the nerd jets. Hear me, brethren, Slay the Dragon is not that sort of film. It has very little to do with dragons, and nothing to do with slaying. To be clear, not a single soul is slain throughout the duration of its 101 minutes. “End Gerrymandering or Democracy Dies” boldly spread across the header images should be a hint, but this is Flixist so I’m just making sure.

Much of the public commentary surrounding Slay the Dragon revolves around the usual partisan picket-lines of Democrats and Republicans, portraying the film as just another instance of politics being politics. And while it’s hard to argue that the film doesn’t lean in one direction, it’s objectively non-partisan core messaging regarding gerrymandering is something that any fan of democracy can and should get behind.

We owe the term gerrymander to one Elbridge Gerry, Governor of Massachusetts circa 1812, when a voting district favorable to his political party was redrawn on a map. It was said it resembled a salamander. Satire from the time added fangs, claws, and wings. It now means to achieve voting results by manipulating the boundaries of a voting constituency. Fittingly enough, state legislatures are allowed to redistrict during census years, or every 10 years, currently ending on zero years. That’s right, like this year.

Slay the Dragon examines gerrymandering in the United States from 2008 on, a period in which republicans and their backers pulled off some truly elite level dickering by redistricting to maximize outcomes that essentially negated the popular vote. They accomplished this using advanced analytics, not insignificant (yet highly efficient) political funding, and a nationally orchestrated strategy all of which may very well have led to our current president sitting in office, in his golf cart, at Mara-a-Lago.

The film is two things at once: 1) an education on the topic of gerrymandering and the current decade of political machinations that attempted to create a system in which one party could maintain control of seats regardless of what a majority of voters wanted, and 2) the story of a grass-roots campaign to end gerrymandering in Michigan led by rookie political activist Katie Fahey. While the film’s educational efforts to explain gerrymandering and its potentially devastating consequences are important, Fahey’s journey is the more captivating aspect of the film simply because hers is a story that anyone can get onboard with, while the former effort is politically bent enough to alienate many potential viewers.

Fahey’s journey begins with the universal language of powerlessness, of a sense of impending doom coupled with the hopelessness that accompanies powerlessness or a stifling imbalance of power. But, unlike most of us, rather than wallow in these feelings, or perhaps harbor a semi-secret resentment of your in-laws for their incorrect political views, Katie decided to act and do something about the increasingly partisan state of affairs in her world. She set out to organize and mobilize an army of volunteers to help her end gerrymandering in her state for good.

The state of American politics has become so polarizing that most of us are afraid to discuss them with almost anyone outside of a handful of our closest confidants, some of whom are not necessarily even family at all. We’ll watch pundits kick dirt and sling mud on TV and we’ll read about it in the press and we’ll likely find press kind enough to provide us with a hot take that we agree with 100%, but we won’t discuss it in a rational and civil manner with a neighbor or a stranger on the street. We’ll get on Twitter and troll, troll, troll!

When politician is a dirty word, it takes a strength of character to attempt to accomplish something that can have universally beneficial results and right about now, as we approach a month of quarantining ourselves to our own homes in this country, universally beneficial results are something I think we can all agree on. While it’s hard to say that some of our early failings in response to the coronavirus are any one person’s fault (they are), it’s easy to agree that eliminating a system that allows politicians to feel too safe in their jobs and too little responsibility to the people who elect them is a win for everybody. Fahey’s brand of infectious activism should be taught in schoolrooms across the country so that future generations are enabled with the self-belief to take back political power from vested and monied interests, at least when the schools reopen–it might be up to mom and dad for now.

Directors Barak Goodman and Chris Durrance might have done more good offering a more balanced history of gerrymandering, one that acknowledged that while Republicans may have most recently perfected the practice, Democrats have used it to their advantage as well, and in point of fact, when either party can control the impact that our votes have on who remains in office, it’s a disservice to us all. This is exactly why Fahey’s story is more than central to the film, it’s the part of the story that anyone can get onboard with. Her campaign in Michigan proved to be a successful one, and either inspired, or coincided with several other state initiatives that led to similar reforms, putting districting decisions in the hands of citizens, not politicians.

If you’re feeling slightly overwhelmed by the world amidst the COVID-19 outbreak, this film might inspire you to take up a cause to do something about. 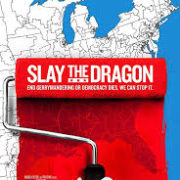 If you're feeling slightly overwhelmed by the world amidst the COVID-19 outbreak, this film might inspire you to take up a cause to do something about.