0
In Soviet Russia, no one can hear you scream

It’s the case with genre films for the vast majority: There’s a formula that’s been established, and it’s the variations therein that distinguish a given film. What elevates (or sinks!) a title, stamps it in your memory amongst the sea of knock-offs, imitations, or just plain forgettable fare. Clawing its way atop the heap of “It came from outer space!” horror, the Russian-produced Sputnik metes out its fare share of visceral thrills for sci-fi horror junkies, layering in its own Soviet flavor and, maybe, even some thoughtful input.

It’s 1983, and the failed return landing of a Soviet shuttle from a routine expedition leaves cosmonaut Konstantin (Pyotr Fyodorov) shaken and curiously-maligned by his extraterrestrial escapades. His co-pilot doesn’t have much on his mind… having had his head caved in on landing. But surviving the crash isn’t enough, with the Soviets quarantining Konstantin as he exhibits strange behavior, prompting the entrance of Tatyana Klimova (Oksana Akinshina), a controversial-but-efficient physician who’s willingness to push cases to their limits attracts the military’s eye. Under the guidance of the stone-faced Colonel Semiradov (Fyodor Bondarchuk), Konstantin’s case is revealed to be that of an alien parasite, entering and exiting his body (in an appropriately-squeamish fashion) nightly. Naturally, the Russians want to know just what the heck they’ve got on their plate. Namely, “How can we weaponize it?”

Sputnik plays its major monster card early into its just-under-two-hour runtime, with the star space creature emerging from Konstantin in all of its slimy, CG glory. The very premise of an alien parasite is one not peeled back in layers, as can be the case with some horror that mimics this story, but rather the backbone of Sputnik‘s story arcs. The game becomes one of analysis, as Tatyana prods and pores over the esophagus-burrowing ET, and its relationship with its human host become increasingly strange. 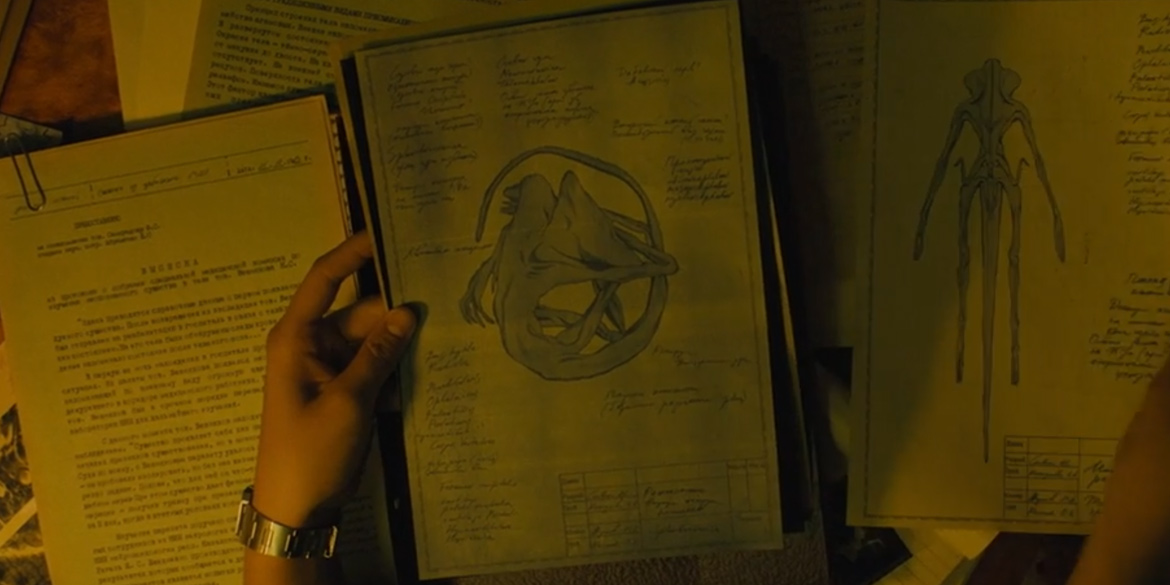 For the most part, Sputnik manages to keep this investigation interesting, though audiences are likely to be whisked away by thoughts of “Oh, this reminds me of Alien,” or “Man, the art direction here is almost as good as Chernobyl!” Essentially, Sputnik is bound to recall works of a similar nature that far exceed the film’s qualities. And that’s okay, because genre is founded on filler. Which isn’t to say that Egor Abramenko’s stab at Ridley Scott’s xenomorph-throne atop the mound isn’t a worthwhile watch.

Maybe ironically, I found Sputnik‘s early-’80s Soviet architecture to be some of the film’s most-impressive visuals, rather than the creature effects (which are perfectly serviceable, if a bit bland). Being a Russian production, I can only assume locations and props of the era were available to the crew, and it shows. Tatyana is briskly courted through brutalist office buildings and bureaucratic hearings–most of which are starkly and dramatically lit by ye old Russian fluorescent bulbs–before being flown to Kazakhstan where Konstantin crash-landed. Sputnik achieves its period detail without shoving it down your throat like an unwanted alien, making it a pleasant (?) tour through Soviet time. 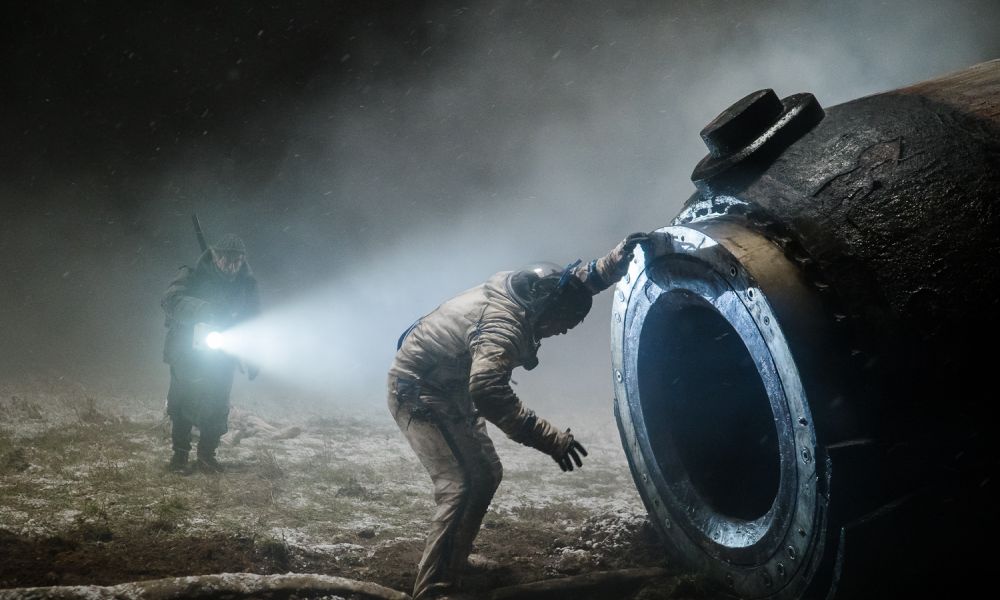 Though despite literal dressings, the genre skeleton beneath the Russian veneer does have a tendency to poke through Sputnik, with story beats unfolding on schedule like a bureaucratic tram line. Just when you’re thinking “Hm, I wonder what the alien eats,” well, we’ll show you! When the house of cards begins to fall–as dealings with aliens and the military are wont to do–the stubborn and antagonistic forces the Colonel represents are surmized in a single exchange: “Is this the only thing you care about? Weapons,” Tatyana demands. “Yes,” is the Colonel’s reply. Well, there you have it, folks!

Simplicity is absolutely not an inherent flaw, but because Sputnik manages to only moderately-entertain (and near the end, perhaps even confuse) its audience, the lack of real hooks or satisfaction become a little tiresome. Couple this with some grating, out-of-place musical embellishments and a rushed, muddled ending and Sputnik finishes the race, only it’s far from first place. 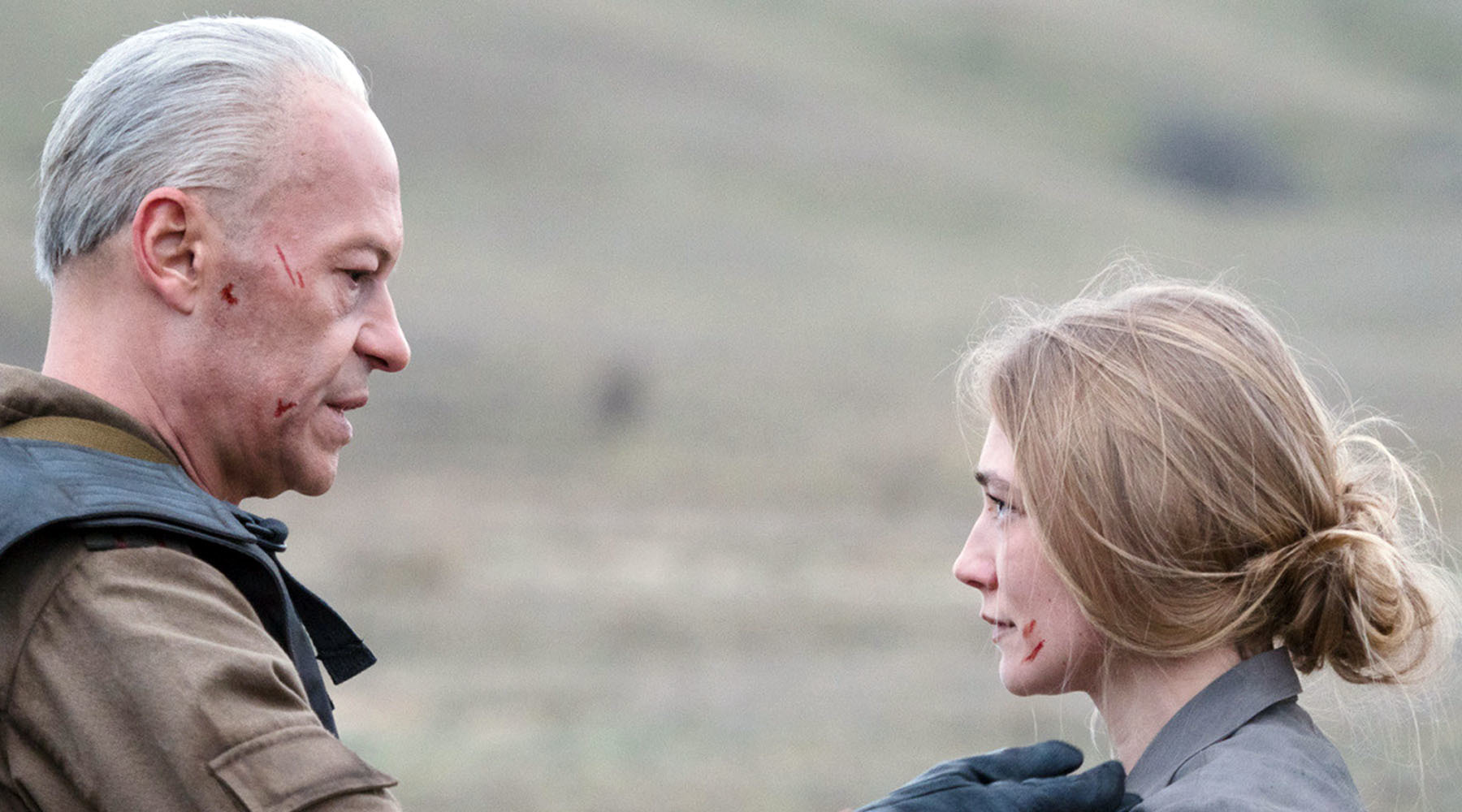 There’s always a bottom line to be had with films of this nature; ones where a mere glance at the trailer, or even just the promotional stills will attract or repel a viewer, often with an accurate idea of how they’ll feel about the experience once the dust has settled and the blood’s been spilled. Sputnik doesn’t break new ground, yet it also doesn’t do quite enough to get by simply on homage and adherence to the tried-and-true. It’s a shame to see such a solid-looking film wind up feeling hollow, but perhaps that’s the most-fitting, bitter irony of Abramenko’s movie. Like Konstantin’s apparently-quite spacious innards, the trappings of Sputnik are merely a pleasant exterior, one that houses an undying, automatic organism that will go on forever. There have been films like Sputnik before, and there will be films like Sputnik again. Hopefully next time we’ll get one with a little more bite.

Though it only rarely elevates itself beyond a simple homage to the alien creature-features it mimics, Sputnik manages to be a worthwhile capsule of cosmonaut horror. Just don't ask for the moon.