0
We're fated to get more sequels

In some strange way, the Terminator franchise mirrors how its titular robots are described: unstoppable. Despite every sequel past Terminator 2: Judgment Day being bad, the series just won’t stop coming back. Writers have attempted to do justice to T2, but each sequel stumbles in a lot of key areas and leaves the future of the series in doubt.

So it must have been a big relief to fans to hear that Terminator: Dark Fate would reunite original director James Cameron with the series. His influence and creative decisions would be able to make the definitive sequel to what many consider the best sequel ever made. That Dark Fate ignores all of the others is also good, since it would remove tons of baggage and unnecessary plot points in favor of following up on the legendary T2.

Now that Dark Fate is out, the outcome is surprisingly the same as it’s always been. This is a sequel to a film that didn’t need an epilogue and that adds absolutely nothing to the mythos while also failing to do anything original. At least the story is pretty decent?

The first 10 to 15 minutes of Dark Fate are the absolute peak of the film. Starting with flashbacks to Sarah Connor’s (Linda Hamilton) gut wrenching speech in the mental institution from Terminator 2, the film cuts to her and John Connor on a beach in Venezuela a few years after the conclusion of Judgment Day. I won’t spoil what happens, but it wonderfully sets up the motivation for Sarah’s eventual inclusion in the film proper.

The film then flashes forward to the present day and introduces the two future characters in the film. Grace (Mackenzie Davis), an augmented human soldier, winds up at the bottom of a bridge in Mexico City. She takes out a few cops before making off with a vehicle. The Rev-9 Terminator (Gabriel Luna), a machine that can duplicate itself, lands in an apartment complex close to the film’s main protagonist. It’s all the same kind of stuff that previous Terminator films have done, just with breakneck pacing to save series veterans from reliving past moments.

Cut in between these moments is an introduction to Dani Ramos (Natalia Reyes) and her brother Diego (Diego Boneta). The two live a generally happy life and are setting off to work for the day. When they arrive at their factory, Dani sees a robot has replaced the station where Diego does his job. Confronting her boss about how machines will replace humans (HINT, HINT), Dani’s “father” comes looking for his children to deliver lunch. As Dani is walking back, she and Diego witness their father brandishing a gun before Grace appears and blows him away. 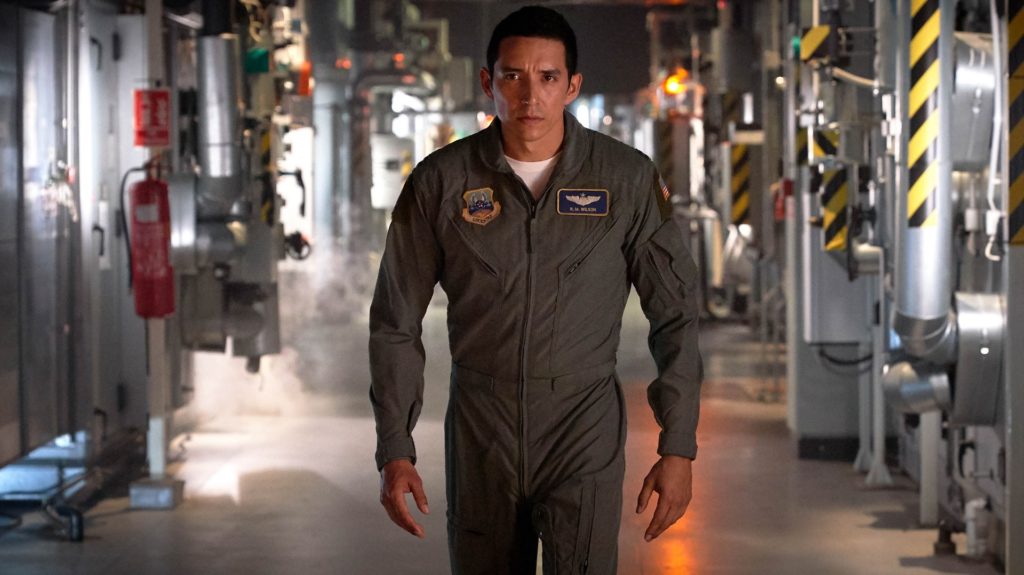 With that, the film proper begins and the pacing doesn’t let up for a little bit. As I said, those first 10 to 15 minutes are great because there really isn’t much time to think. While understanding what is going on requires knowledge from the past, the film kind of copies what the original Terminator movie did by letting characters organically drop exposition in the middle of thrilling action scenes. Sadly, the action is where this film kind of crumbles.

The first car chase is incredibly reminiscent of what Terminator 3: Rise of the Machines started with. Grace takes Dani and Diego in a truck through Mexico City while the Rev-9 is in a dump truck plowing through cars and walls. It’s shot well, but the CG on offer is poorly implemented. It’s hard to tell if there even are practical effects in the film, because every moment of the Rev-9 existing looks out of place in the frame.

Still, the sequence on the highway with cars getting flipped and the Terminator plowing through guard rails is great. Gabriel Luna manages to capture the cold, calculating efficiency that Arnold Schwarzenegger did all those years ago as he’s driving his truck. The machine seems completely determined to kill, which is precisely what a Terminator should come off as. 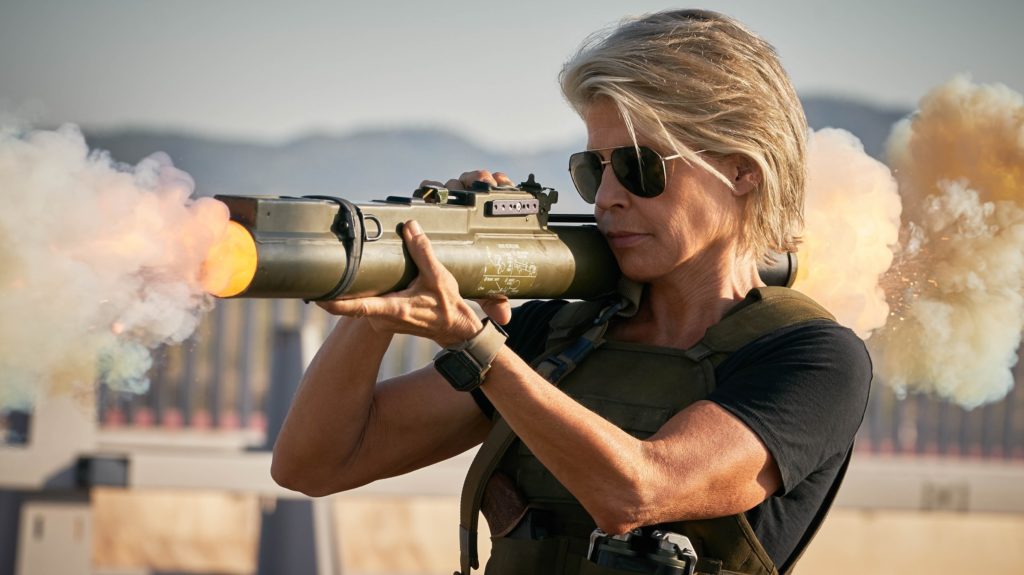 It’s not long before the heroes are on the ropes. Having driven their truck to the brink and even losing Diego, Grace takes Dani and makes a last stand against the Rev-9. She tells the girl to run, but then a jeep careens down the highway to smash into the Terminator. Enter Sarah Connor, brandishing all kinds of guns and laying waste to these machines. The impact of the moment is supposed to be neat, but has been dulled by its inclusion in every single trailer for Dark Fate.

This is where the film truly begins and the pacing starts to slow down. Clocking in at a little over two hours long, this isn’t the longest Terminator film, but it does drag a bit. We then get treated to expositional scenes that explain Sarah’s life, what Grace is, and how Dani fits into the picture. It’s necessary, I guess, but the film can’t seem to find a way to integrate it alongside the action better. It’s also strange that the movie is seemingly taking scenes from past films and re-purposing them.

Look no further than Sarah’s explanation of her resume (a scene from the trailers). She’s in a motel while taking a break from running. It mirrors Kyle Reese’s intimate moment with her from the 1984 original, just without the lovemaking. The action sequences, too, are like beefed up copies of the past. There’s a chase scene with a helicopter, a police massacre, and a climactic battle in a factory. For all of this talk about striking new ground with the Terminator series, Dark Fate is very insistent on remixing the past. 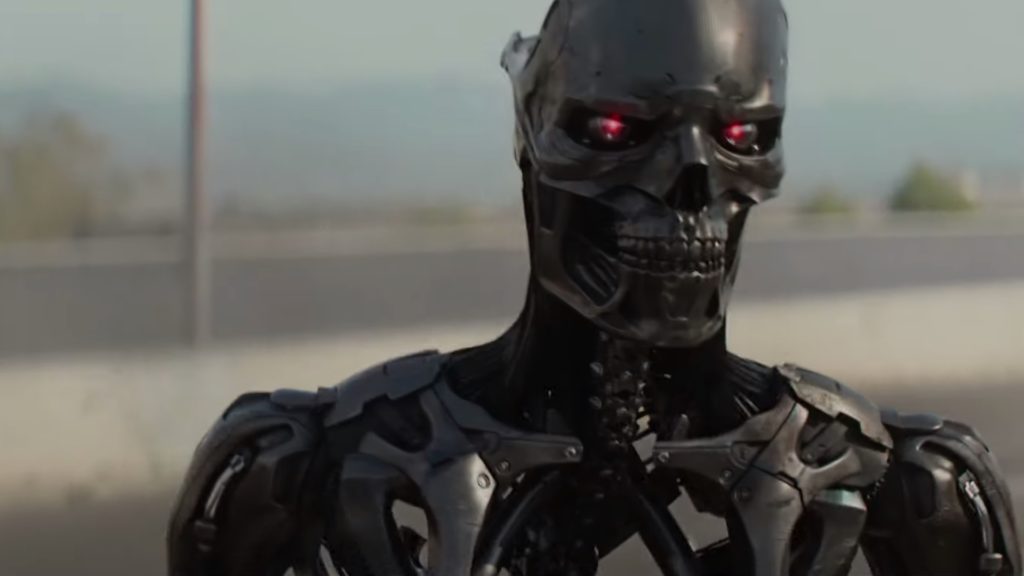 What really makes this all stick out is just how incredibly dull the action is. For some reason, director Tim Miller seems to have forgotten how to direct an action scene. While the opening is thrilling, everything else is a mess of CG, dark color grading, close-up shots, and over-the-top bombast that never results in clarity. It’s hard to make out what is even going on at times, but even when things are in focus, it just doesn’t look right. Terminator 2 revolutionized the use of CG in Hollywood, but it also didn’t forget to incorporate it alongside practical effects. Dark Fate, on the other hand, almost forgoes traditional effects work to try and make its CG look as realistic as possible. It never accomplishes this.

When the movie isn’t trying to dazzle you with crappy CG, that’s when it becomes enjoyable. The plot deals with a new Terminator threat created by a corporation called “Legion.” While a bit on the nose, at least the characters are given interesting twists on old tropes. Explaining too much will give away those twists, but every decision the characters make is related to the film’s central theme: rekindling the humanity that has been lost in this world.

This even rings true for the T-800. I’d have to spoil the entire crux of the second half of the film to really get into it, but I will say that the old Terminator’s storyline is an interesting evolution of what we learned from T2. It’s helped by Arnold Schwarzenegger’s acting, which is probably the best he’s ever been in the role. 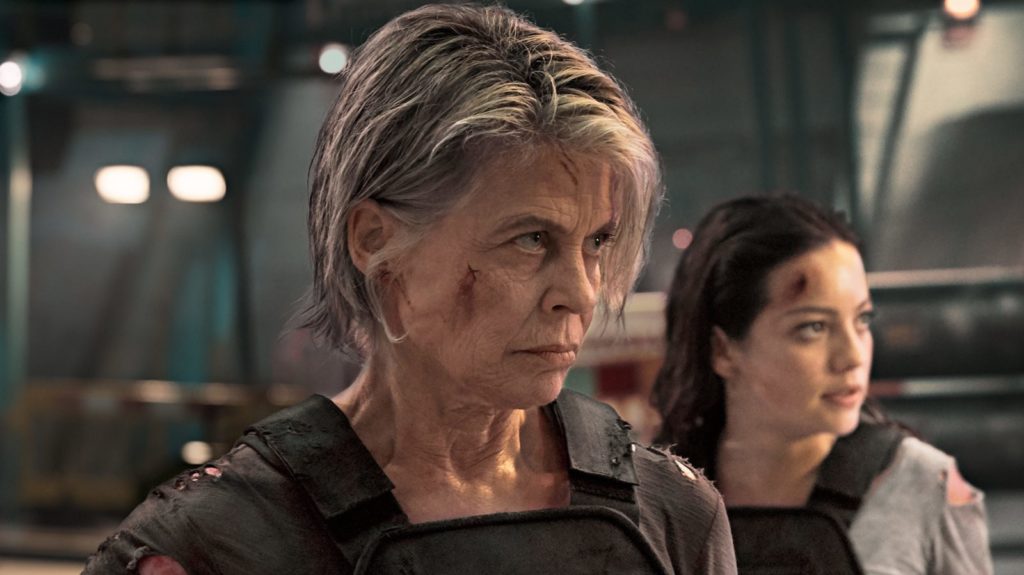 In fact, everyone in this film is pretty solid. Mackenzie Davis portrays a believable badass that teeters the line between human and machine while Linda Hamilton is utterly convincing as a tortured soul looking for closure. Natalia Reyes brings a lot of power to her portrayal of Dani, going from scared and alone to hopeful and commanding by the film’s conclusion. The only real low point is Gabriel Luna, but that has more to do with the writing than his acting. The Rev-9 is just really not that interesting of a threat.

It’s sad to say that, too, because the villain is typically what holds these films together. In the original, Arnold was a devastatingly cold killer that felt like an unstoppable menace. In T2, Robert Patrick played an expertly crafted foil to Arnold’s muscular presence. In Dark Fate, Luna just feels kind of tired. He’s a better idea than the T-X from Terminator 3 or a younger T-800 like Genisys attempted, but he doesn’t really contrast with Grace or the T-800 like in past films. He’s just there and distracts the film from its best moments to lead into more below-average action. The movie at least lets him flex the Terminator’s infiltration abilities, but that’s the only highlight of this new model.

Ultimately, by the time the credits roll and another sequel is set up, Dark Fate just ends up feeling unnecessary. The only real reason it exists is because the past Terminator sequels were garbage. James Cameron probably felt the need to return to the franchise just so he could show that these movies don’t need to be awful. Dark Fate succeeds at that, but not much else.

There’s certainly a lot one can glean from the story, but Dark Fate does nothing to top or even match the groundbreaking Terminator 2. After 28 years, I’m not sure anything will ever be able to.