Rich people do a lot. Money opens many doors. They get away with a lot too. I get that. Ever had to fight a traffic ticket? Notice the line of lawyers at the bar who always get to deal with the judge first. They don’t even wait in line to get in the courtroom, if there is one. Yup, they’re there for the rich people.

Buying your way out a draft? Sure. Paying for your kids to have falsified records to get into schools they shouldn’t get into. Yup. Hunting humans for sport. Of course! This is not a new theme. One of the most popular short stories of all time, The Most Dangerous Game, was published in January of 1924, and ever since, we’ve been getting film adaptations, loose adaptations, and straight ripoffs of rich people hunting other human beings for the thrill of it. I favor Jean-Claude Van Damme in 1993’s Hard Target as well as Ice-T as a homeless survival expert in 1994’s Surviving the Game.

Still, nothing beats new, so I understand if you want to venture out into the unknown to catch The Hunt, the latest and belated-est in this grand tradition. But why risk coronavirus for The Hunt, a movie that’s mostly so average you’d never pick it out of a lineup next Friday, let alone in five years?

Not so average joy: Betty Gilpin, best known as Glow‘s Debbie Egan. She crushes her role for nearly all its $6-a-pack worth.

Friday the 13th might deliver on its reputation for once. With COVID-19-based decision-making passing a tipping point earlier this week, individuals are starting to make different life choices. Mass-transit ridership is dropping, people are working from home, kids are getting the vacation they always wanted but never asked for from school, communal gathering arenas around the country and the world are closing: so far, theaters in the US are still open, but it remains to be seen whether or not the box office is going to take a hit. With many major releases delaying their theatrical openings, it’s clear that Hollywood honchos are bracing for the worst, especially as major studio tent-poles depend on a global releases, and theaters in several markets, including Italy and (notably) China, are closed.

The Hunt was originally due to release on September 27, 2019, but was delayed indefinitely by Universal Pictures in the wake of two mass-shootings and misguided criticism by political factions and outlets (including the Chief Red Hat his-self). Politicians often point fingers at video games and movies after mass shootings instead of at guns, where they should. It’s a familiar play from the political playbook. It’s also interesting that the very tropes of the film they’re using as a scapegoat are represented in their own actions. Everyday people gun downed in senseless violence because politicians making lots of money from the armed industrial complex don’t want to do anything about gun control.

Utilizing a maneuver I haven’t yet heard of, Universal waited half a year and then leaned into the same criticism that shuttered the film as its marketing campaign. The Hunt is now being called “most talked about film of the year.” Its one-sheets even features apparent quotes from the fall blowback deriding it as “exploitative” and “demented and evil.” It’s not that films embroiled in controversy don’t love to embrace said controversy in their marketing, it’s that they usually don’t so after the controversy forces them to delay their own release.

Credit is due to director Craig Zobel and writers Nick Cuse and Damon Lindelof for taking a basic, rehashed concept, and attempting to have fun with it. Cuse and Lindelof have famously collaborated as writing partners on HBO tent-poles The Leftovers and the recent masterpiece Watchmen. The pair also collaborated with Zobel on three episodes of The Leftovers, which no doubt led to this most recent team-up.

In this politically charged climate of ours, what would happen if a bunch of liberal elites kidnapped a bunch of less fortunate conservatives, drugged them, transported them to an unknown location, armed them, and then immediately began to murder them one by one? If you understand that, then you understand The Hunt. There’s little mystery here, as the film actually begins with the elites mid-flight to the unknown destination with their victims drugged amidst them. One of these “deplorables” wakes up before he’s supposed to and we see just how serious these wealthy snobs are about murder. Hint: deadly serious.

Soon, the rest of the deplorable gang awakens in the woods, with locked gags in their mouths, and no idea how they go there. They all stumble their way to a large crate that ends up containing an arsenal of weaponry (as well as the keys to their highly unnecessary gags). Then, all hell breaks loose and it’s kill or be killed. Let’s be real, we know that for entertainment purposes and morality purposes, not a lot of these people are making it out of this movie alive.

If it seems like I’ve already revealed too much, this is where I should probably warn you not to watch the trailer for The Hunt. Many of the more cleverly disguised twists and genre trope subversions are revealed there. In fact, a half-clever viewer will be able to put together enough to ruin most of the film’s surprises beforehand. The unspoilable elements of the movie are its attempts to use its relatively talented ensemble cast (additional shout-outs to Emma Roberts, Glen Howerton, Ike Barinholtz) to throw shade not only at very privileged people, but at the microcosms of culture that have developed in our modern era. Woke culture, cultural outrage, internet passive aggressiveness, and political correctness are just as much targets of senseless violence as the deplorables, though its the later that drives everything from the action to this movie’s questionable existence.

In terms of plot holes, there are more here than pores on your nose. But consider this: if most of the hunters are just going to start wasting the hunted the second they touch a weapon, why bother arming them at all? If that’s the plan -and the plan is to do so with superior firepower and an incredibly booby-trapped battlefield-, why bother to hide anywhere else to deceive anyone who happens to get away?

What are the odds that anyone’s making it that far? Why bother disguising a license plate on a truck? And if you’re going to do that, isn’t it way easier to just switch out an actual physical license plate than to create a license plate/bumper decal to stick on? There’s an even more outlandish moment when one of the hunters hides outside the grounds of the hunts in a place that would indicate he’s had to do so hours in advance on the off chance, against all odds, that one of these hunted would escape in just the right way, all while risking capture by a foreign army of some kind. OK.

It’s best that you ignore the plot: you’re here for the battle royale anyway, after all. It’s also best for me to not go into too many more details beyond that, for it will definitely settle the few surprises left for you to enjoy. But can I say, since the rich so naturally win many opportunities that present themselves in life, wouldn’t it be fun to make a movie where a bunch of very average (at least financially) individuals hunt and kill some rich people? Maybe that’s just called The French Revolution. 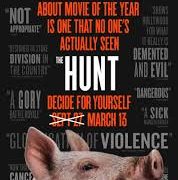 Why risk coronavirus for The Hunt, a movie that's mostly so average you'd never pick it out of a lineup next Friday, let alone in five years?