0
The beat does not go on

There’s an interesting premise to The Rhythm Section or at least one that’s a bit more surprising than the trailers let on. The film is a revenge movie. One of those movies where a person’s family is killed by someone and they train super hard for a while so that they can get revenge on those who wronged them. In that it’s pretty standard in terms of plot or story.

However, it’s entire slant seems to be, “What if this actually happened?” As in what if the person who wanted revenge didn’t become James Bond but instead just became a kind of hapless but driven person with the right connections to find the people she wants to kill. In theory it’s a promising take on a genre that is pretty much fantasy fulfillment. In practice, however, it’s quite another thing.

It’s a bit ironic that Eon Productions, the company who makes James Bond movies, made this film as well. It’s protagonist, Stephanie Patrick (Blake Lively), is basically the opposite of James Bond. Stephanie’s entire family is killed in a plane crash and it drives her into a life of drugs and selling herself as she slowly wastes away. However, when a reporter finds her and tells her that the plane crash her family died in was actually a terrorist attack being kept quite she embarks on a journey of revenge, eventually finding ex-MI6 agent B (Jude Law), who helps train her to take out the unknown author of her discontent.

She sucks at it. She is the antithesis of James Bond. Stephanie is not a super spy and she barely functions as a human being for most of the movie. The film, initially, handles this honestly. As a drug addict and physically tiny woman she is isn’t able to handle the rigors of going on a series of missions. She also isn’t a murderer, setting up some interesting conflicts with herself, B, and the idea of revenge in general. This leads the film to initially be more of psychological dive into Stephanie’s desire for revenge than a revenge thriller and things actually seem like they might be going in an interesting direction.

The problem is the movie’s tone and character development are all over the place. Stephanie spends the majority of the film struggling to kill anyone, including a blind cripple. This is a point the film hammers home so hard that it makes one of the repercussions of her aversion to murder the death of two children. Then, suddenly, in the third act she shoots three guys dead in the blink of an eye and doesn’t even pause. The movie whips between a deconstruction of the genre to a cliche so fast that it’s hard to enjoy it. There’s no consistency among any character. Even worse, because it spends the first half of the film in character study and then slams its foot into revenge thriller so fast the eventual comeuppance of our hero is both confusing and rushed.

Blake Lively deserves a better movie around her. She is nearly unrecognizable at the beginning of the film and delivers a performance so raw it feels disconnected from the latter half of the story. Her performance is layered and fantastic but the rest of the film around her doesn’t reflect it. In a second case of irony, the stellar performance causes even more tonal differences than a weaker performance would have. It doesn’t help that the cardboard cut out they hired to be Jude Law for the film doesn’t care at all about being in the movie. Lively seems to be the only one who believes in what she’s doing throughout the film.

Director Reed Morano definitely has a future in thriller/action cinema if she can figure out her issues with consistency and tone. She directs the movie in a visceral way that parallels the hard truth of what her protagonist is going through. It works for the first part of the film when the action is intentionally clunky fights and ugly attempts at revenge but, once again, as the movie steers into standard revenge thriller territory her direction gets lost. By the end it’s clear no one was sure what kind of film they were making anymore and it all turns into a bit of a mess.

There is no better summation for what The Rhythm Section is than the title itself. It is taken from a part of the film where Stephanie is learning how to control herself with B training her. He tells her that her body is the rhythm section of a symphony, with her heart being the drums and he breathe the base. The metaphor opens the film and then is used again midway through, setting up a Chekhov’s gun situation for the end of the film. Except the gun never goes off. After the first two acts the motto is completely dropped. There’s no more rhythm section in The Rhythm Section. In the ultimate irony is there’s no rhythm to the entire film. 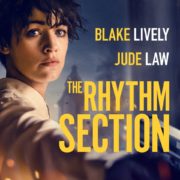 There's no more rhythm section in The Rhythm Section. In the ultimate irony is there's no rhythm to the entire film.