Marketed as something Lars Von Trier-adjacent, We only contains a single scene that’s more sexually explicit than common R-rated fare. You see a bit of penetration that isn’t very impactful or necessary, but as a whole it’s nothing worse than you can easily find in the exploitation cinema of the 70’s. If you’re looking for erotics, you probably won’t find them here. The only true surprise We‘s overt sexuality might offer is that for a film that markets itself with a series of naked butts on its box art, it’s cartoonishly anti-sex.

We follow our pack of teens rich enough to live in homes that Parasite‘s Kim Ki-woo would need 547 years to buy across one wet, hot, Scandinavian summer. Interested in devising means to generate their own income, the group experiments with sex–which naturally leads to pornography, prostitution, and blackmail. The story feels at once to take place in the 90’s with handheld video cameras and only one teen understanding that internet pornography exists, the 2010’s with modern cell phones and computers, and the 50’s with absolutely no mention of condoms in the entire film and a professor explaining that a man’s brain is bigger than a woman’s, therefore inherently better.

We‘s themes, however, aren’t so slippery. They’re firmly planted in that professor’s ass-backwards classroom. It boasts an impressively reductive view of women’s sexuality and ambition as evil. Liesl (Pauline Casteleyn) is a smart and motivated young woman who would represent feminist good in most modern films but here is rendered to a joke, jabbering about wanting to get abortions so she can keep the fetuses in jars as an art project. Teens drinking liquor is meant to illicit gasps from the audience, and all their evils seem to stem from their sexual freedom. It’s more puritanical toward teen sex than an 80’s slasher. Not to mention that We throws the burdens of this evil squarely on women’s shoulders. There’s a plenty of drama surrounding these girls for selling themselves to married men without a shred of culpability falling on the men themselves. Aren’t they guilty? As the group’s prostitution ring grows, and the teens begin to blackmail their most powerful clients, We goes out of its way to pity these poor men who have been swayed by the allure of a supple teen body, and I’m not buying it.

More bizarre is that the dramatic gut punches We aims to build could easily be gags from an 80’s sex comedy. Women standing on an overpass and flashing their vaginas causes a bloody, fiery fifteen car pileup in which we’re left to see the battered bodies and hear the screams–and I can’t help but laugh through it. It’s too absurd. Women lifting their skirts is akin to an act of terrorism here. Two of the teens argue over the event as they read about it in the paper, and the remorseful teen we’re meant to see as good believes the crash was their fault. Meanwhile, our girl Liesl makes the point that they were on a pedestrian bridge anyone could walk across, and if the sight of a vagina causes a driver to plow into the car ahead of him, then it’s his fault. This is fair and true, but unfortunately the film portrays it as sneering double-talk meant to cover up their sin.

Worse yet is the death of Femke (Salomé van Grunsven), a symbol of light and joy, left to mystery as We follows four of the teens’ arcs from their distinct points of view. So, how exactly did this girl’s abhorrent use of sexuality get her killed? Did she catch an STD that did her in (because in this universe there wouldn’t be any antibiotics to save her)? Was it a botched DIY abortion? Was it a rough customer? None of the above, actually! It’s somehow more ludicrously extreme.

The teens like to play a game in which the girls guess at an object inserted inside of them. Sounds like a harmless gag from an American Pie spinoff, but in this case Thomas (Aimé Claeys), the more brutish of the dudes, shoves an icicle up Femke’s butt so hard that she hits her head on a rock and dies. Once again, I’m laughing, and I can’t help it. It’s very dumb and yet treated with all the seriousness of an after school special or Victorian morality play.

The broken structure does nothing for the story as a whole, either. We’re dragged back and forth across the summer with different teens narrating their bits of story, and it does little but confuse We‘s timeline.

The only of the four stories that changes that narrative in any significant way is of course the last one, which follows the thinly mustached cretin Thomas as he lies and manipulates and is an all around terrible person. This is the one non-female We makes to be genuinely unlikable as he narrates a fake story from his court hearing about how a politician was actually responsible for their ring of prostitution and blackmail, while we see Thomas instigate every one of the group’s worst acts (except for the horrifying car wreck, which is a hundred percent the fault of women’s vaginas). It’s hard to know what to make of this so late in the film, though, as all the teens show how they’re somewhat to blame in their own ways.

That said, if the film were edited differently, perhaps to weave Thomas’s false courtroom narrative through the whole of the film while displaying his increasing shittiness as the plot wore on, it might have been more effective and offered a different read. As it stands, though, We is a messy film that will come off as silly to those who aren’t conservative enough to worry about the reputation of a politician who’s only crime was paying to have sex with an underage girl.

There are people who find Parasite much funnier than I did and people who find The Lighthouse much more serious than I did, so it’s possible that there’s a more straight-faced interpretation of We that I’m just unable to see. I’d still argue, though, that unlike the other two films you’d still be hard-pressed to enjoy it. 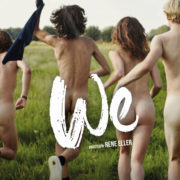 There is little reason to see this movie at all. It's only saving grace is that it isn't broken.
3.5

There are people who find Parasite much funnier than I did and people who find The Lighthouse much more serious than I did, so it's possible that there's a more straight-faced interpretation of We that I'm just unable to see.