0
A real night shift from hell

Is the world of organ trafficking ripe for cinematic exploration? I ask because it seems that there’s at least one movie a year that crops up on the independent scene that wants to tackle this topic and it’s never as clean as it could be. It has less to do with the complications that movies about organ trafficking/harvesting approaches, but rather that the directors don’t want to fully commit to the seriousness of the subject matter. Take last year’s Flawless, which was primarily about a trans woman trying to feel more complete within her body that needlessly tacked on an organ trafficking subplot. Organ trafficking isn’t something that you can just sweep off to the side. It tends to make itself known fairly easily for reasons that should seem obvious.

12 Hour Shift is this year’s organ trafficking representative that makes the smart choice about going all in on its premise. From the very beginning of this movie until its very end, this is a movie about people who steal organs and sell them on the black market, only as a darkly comedic thriller. Everything that can go wrong does go wrong and it leads to a satisfying movie that can feel a little undercooked at times. It still hits more than it misses, and in my books that makes it the best movie about organ harvesting I’ve seen in years.

Mandy (Angela Bettis) is a nurse on probation who has a pretty bad drug addiction, involved in a black market organ trafficking business, and worst of all, is working a twelve hour shift at her hospital. At first it’s business as normal, with Mandy giving her moronic cousin Regina (Chloe Farnworth) a kidney to deliver to a broker, but when the delivery goes wrong because of Chloe’s ineptitude, everything goes south at an alarming rate. Dangerous convicts, the police, organ harvesters, and one of the most inept murderers I’ve ever seen descend on the hospital as Mandy tries to survive her shift and not go to jail in the process.

The best way to describe 12 Hour Shift is that it’s a movie that has a lot of tools in its toolbox to use. Nearly every character, large or minor, is used at some point to further this thriller and continuously ramp up the stakes. At times its implementation is quite clever, like how one character uses a woman with dementia to make her believe that they’re lifelong friends, creating a scenario that shouldn’t be as funny as it is, but still manages to work. There are a ton of tools for Brea Grant to play with because of this, yet it feels like the movie never fully reaches its potential or uses all of its tools in a worthwhile manner.

David Arquette plays an escaped convict who was let loose in the hospital, but he feels like such an afterthought that he barely impacts the proceedings. He pops up only a handful of times to do absolutely nothing besides being one extra obstacle for Mandy to overcome. Even when he does finally make an appearance, he adds nothing to the movie outside of saying that David Arquette was involved with the movie. His character’s presence is so worthless that he could have been cut from the movie entirely and no one would have noticed. I’m not too upset about the frivolousness of certain moments because the final product is still tightly constructed, but one more round of editing probably would have helped tighten the overall final product.

Despite the vast amount of potential that the movie has to just let loose, 12 Hour Shift feels far more restrained than it probably should be. Mandy admits that she barely has any hope in humanity and plays very close to the chest, but because of this its easy to feel like Bettis’s performance is heavily under utilized. The same goes for the majority of the cast, who deliver good enough performances, but nothing that jumps out as being noteworthy. A perfect example of this is Chloe Farnworth’s Regina, whose character seems engineered to be unbearable. If the goal was the make us feel completely exasperated whenever she shows up, the mission accomplished. However, I always find it hard to stomach a character who is meant to be grating and unlikeable, yet the actor does a bang-up job of making us feel that way. Can you blame the actor for playing the character too well?

While there are many little nitpicks to point out that could use improvement, what doesn’t need any help is the soundtrack by Matt Glass, who manages to turn the plain and bare hospital into a crazed madhouse. Choirs will chime in at just the right times to add some gravitas to the proceedings and made the action more enjoyable to sit through. Consider me very impressed with his work and hopeful that he’ll get more work in the future.

If I had to describe 12 Hour Shift in one word it would be concise. It knows exactly what kind of story it’s trying to be and manages to deliver on nearly all of its fronts. The plot is thrilling, the comedy was right up my dark, twisted alley, and this came across very well as a dark comedy of errors. There were definitely extraneous elements that could have been removed and the performances vary from being solid to understated, but I was fairly satisfied with what I saw. Now I can easily say that I’ve seen at least one good movie about organ harvesting! 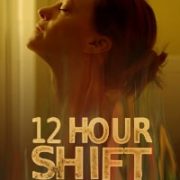 If I had to describe 12 Hour Shift in one word it would be concise. It knows exactly what kind of story it's trying to be and manages to deliver on nearly all of its fronts.