While I was living in the UK in 2015, there was one place that my friends and I always wanted to go: Dismaland. The theme park was billed as being one of the most depressing places on Earth, a den of misery and depression that took several jabs at Disney and its practices. Needless to say, I was all over it. I never had the funds to justify traveling there, however (student budget and all that). I often find myself regretting that decision and wondering to myself, “What if?”

I bring this up because Dismaland was the work of one Banksy, an infamous and mysterious street artist who has somehow managed to work anonymously for several decades while simultaneously receiving worldwide attention. Even if you’re not knowledgeable in the art world, you’re at least familiar with the concept of what a Banksy is. Maybe you remember the Banksy piece in 2018 that was shredded after selling at auction for well over a million dollars. Or perhaps you’re familiar with them from their time in NYC during 2013. Even if you aren’t an art aficionado, you likely understand a few basic facts about a Banksy: they’re a street artist, they’re anonymous, and they’re highly influential.

Banksy Most Wanted is a documentary that attempts to answer the question of who Banksy is, or at least compile a list of possible suspects and let audiences piece together the answer. Banksy Most Wanted also attempts to try and analyze Banksy as an artist and delve into their head and see what makes them tick. It’s a tale of two sides, with one side clearly having more time and development put into it than the other.

After giving us a brief introduction on the work of Banksy, directors Aurélia Rouvier and Seamus Haley begin to dig into a question that seems almost impossible to answer: who is Banksy? If you’re looking for the documentary to provide a definitive answer to that question, then you’re going to be sorely disappointed. It presents several theories on who Banksy could be, (such as Massive Attack frontman Robert Del Naja or a man named Robert Gunningham), but never comes to a definitive answer. My personal favorite theory is Jamie Hewlett of Gorillaz.

Each theory is presented as being viable with Rouvier and Haley providing counter-points to why certain candidates cannot be Banksy -such as tracking Dal Naia’s movements against when certain Banksy pieces cropped up-. Banksy Most Wanted features several interviews from journalists, art exhibitors, and people who have personally worked with Banksy who still swear to retain their anonymity. These people even refuse to speak with private detectives and serial killer profilers, going to extreme lengths to hide Banksy’s true identity.

When the documentary wants to go all out in examining every facet of Banksy, it does so in spades. This is effective journalism that spends zero time on nonsense theories that hold no water. But the biggest hurdle that Banksy Most Wanted has to deal with were the plentiful amount of documentaries also dedicated to the person. While you do have the documentary made by Banksy, Exit Through the Gift Shop, mentioned briefly in relation to the Hewlett theory, that’s not the competition that Banksy Most Wanted has to contend with.

This particular film needs to fight against the other documentaries that attempt to examine Banksy and their work in much more meaningful ways. One recent example is Banksy and the Rise of Outlaw Art, which only released just a few months ago and examines the underpinnings behind their works. Banksy Most Wanted inevitably crosses a lot of the same territory, but the results as just not as compelling as the previous film. 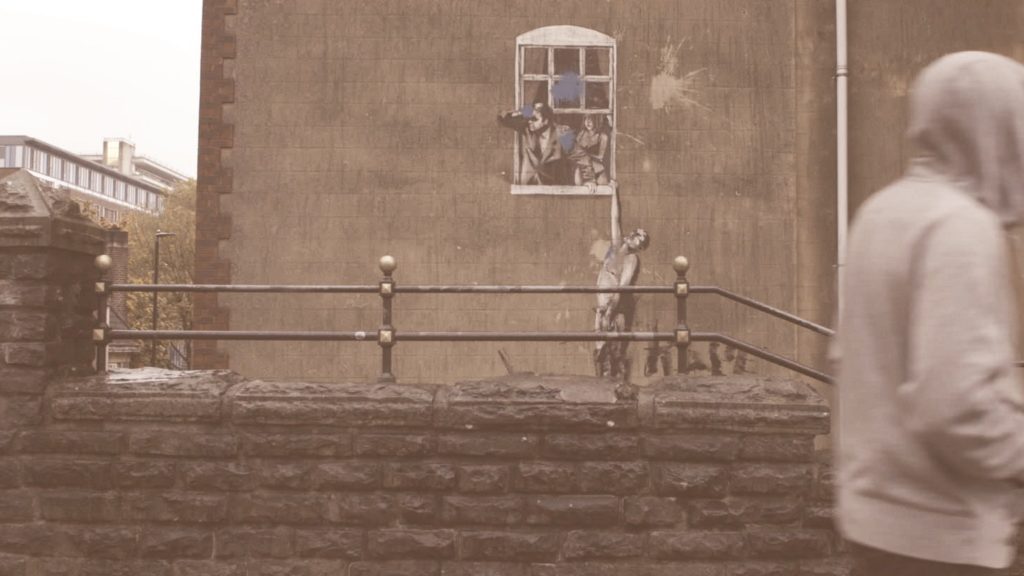 There are several detours from the central premise that look at the impact that Banksy has had not only on the art world, but in local communities. It is interesting seeing how Banksy affects small towns. We get a short look at when a piece of artwork was removed from the English town of Folkestone, then returned due to a host of legal issues. The actual examination of Banksy’s artwork, though, leaves a lot to be desired.

The documentary tends to focus on generalities, stating how Banksy’s pieces are radical and have political messages yet there are claims from other art exhibitors that they “sold out” and no longer represent the average person. They’re claims that feel more like celebrity gossip than actually examining the mystery behind Banksy. It ends up feeling like these snippets were added out of obligation when they were never meant to be a part of the documentary.

Time also takes a backseat to the subject as the film will jump all across Banksy’s career without any clear indication as to why. The movie spends a bit of time focusing on Banksy’s residency in New York in 2013 and the hype it created, only to shift to an earlier point in history when Banksy was situated in Mexico during 2001. The pacing feels somewhat haphazard as it makes these chronological jumps, examining the artist then focusing on the identity. I understand that the documentary isn’t trying to be conventional (especially considering its subject), but it creates a feeling that its very disjointed.

Despite all of that criticism, Banksy Most Wanted satisfies in attempting to shine a light on who this mysterious artist actually is. It falls into a few pitfalls attempting to do so, but the investigative journalism on display here is very impressive and will hopefully lead to more people putting more pieces together, finally giving us a look at who this artist actually is.

Banksy Most Wanted satisfies in attempting to shine a light on who this mysterious artist actually is. It falls into a few pitfalls attempting to do so, but the investigative journalism on display here is very impressive