The characteristically-strange and decidedly-unorthodox studies of the superheroic Umbrella Academy continue in a brand new trailer for the second season of Netflix’s hit Dark Horse Comics adaptation. And the space-time is gettin’ downright loopy.

Warped back to 1963, the team finds themselves in a time-traveling adventure wherein Cold War tensions and the assassination of JFK are all a part of the impending doom (they’ve got just ten days to save us all…) brought on by the sort of meddling that changes history. Time travel–who’da thought it’s dangerous!

The cast returns with Ellen Page, Tom Hopper, Robert Sheehan, Emmy Raver-Lampman, Justin H Min, and the rest of the gang back in their roles as the Hargreeves family, with series creator Steve Blackman running show again.

The comics, created by Gerard Way and Gabriel Bá, have been a big success for Dark Horse and the adaptation one of Netflix’s stronger additions to the streaming giant’s roster, becoming one of their most-viewed series in 2019.

At this point there’s not long to wait for the second season, with all ten episodes of The Umbrella Academy set to premiere July 31st, only on Netflix. 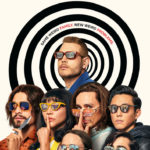