0
That was a hoot

For a lot of kids growing up in the 90’s, Nickelodeon was the place to watch TV. Making a splash as a sort of anti-Disney, the network leaned heavily into programming focused on kids and often pushed the boundaries of what was acceptable for entertainment in the era. Its library of originals has gone on to become a huge part of Millennials lives, with many clamoring for these shows to return.

So with the rise of streaming allowing smaller studios to remake or revive long-forgotten/canceled series, it was only a matter of time before some of the Nicktoons got their due. Announced in 2016, Rocko’s Modern Life: Static Cling was set to be a soft reboot of the series that reintroduced its titular star into the modern era. Not shying away from the themes that made the original so beloved, Nick got the creator and original writers back on board to bring everyone’s favorite wallaby into the 21st century.

While the end results are a little mixed, this is clearly a special made with passion and care. Even though it’s too short for its own good, Static Cling manages to pack the same kind of social commentary that made the original run such an important piece of entertainment for its era. It’s also a commentary about the nature of reboots, themselves. 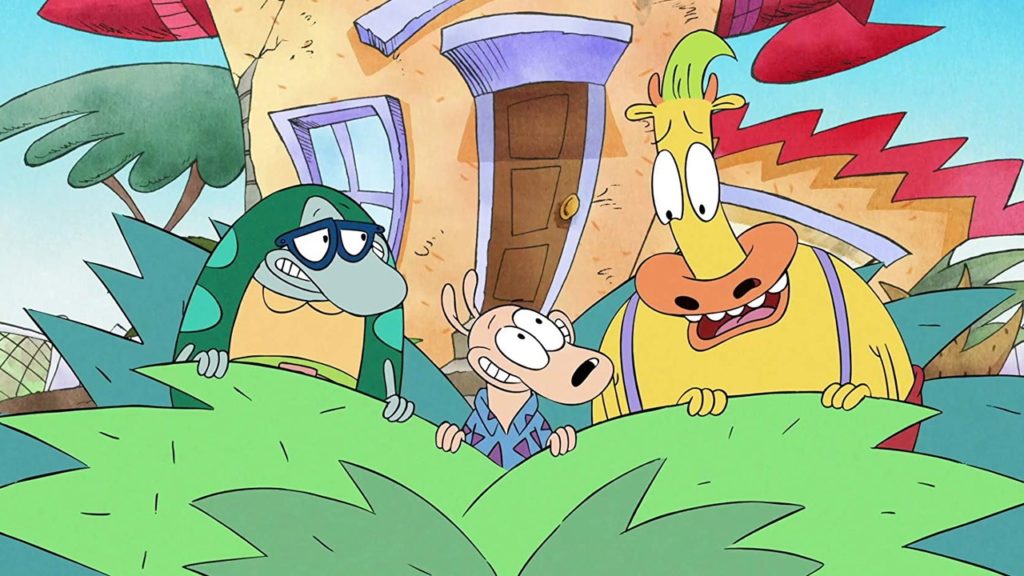 The general plot for Static Cling is that Rocko and his pals return to Earth after spending 20 years in space and are shocked to discover that their favorite show, “The Fatheads,” has been canceled. Well, I say they, but it’s mostly Rocko that is having trouble coping. Always one to be scared, he doesn’t know how to adjust to the 21st century without the comfort food that was this TV program.

The unexpected return of Rocko has caused some problems for residents of O-Town. Unbeknownst to him, Rocko’s house collided with the Conglom-O building while reentering Earth. Ed Bighead, Rocko’s next-door neighbor and now an accountant for the corporation, makes a calculation error that ends up costing the company millions in profits and gets Ed fired. In a mostly self-motivated fashion, Rocko convinces Ed that finding his long lost son, Ralph, and getting The Fatheads rebooted would make Conglom-O tons of money.

In a trend that is becoming increasingly familiar within rebooted properties (see the recent Jay & Silent Bob Reboot trailer), every joke is basically a Meta jab at the very nature of reboots. Ed routinely tells Rocko to “Go Back to the 90’s” and Rocko laments about how he misses the good old days. While some jokes can cut a little deep –Rocko shouting “I just wanted my show back” is almost an echo of what fans have been saying for decades-, this mostly falls into the same pitfalls that all reboots do. You can only be self-referential for so long before it feels tired and forced. 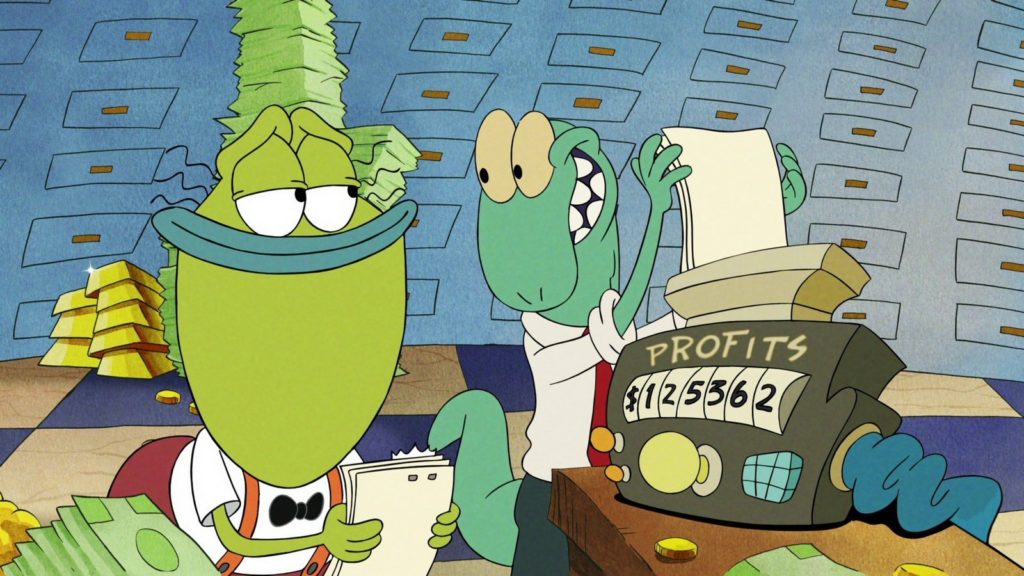 There are certainly some decent jokes and I guess the setup is the best one could have conceivably expected after 20+ years, but I wasn’t really feeling Static Cling during the first half. Then we come to the “twist” with Rachel Bighead and everything made sense. Never a show to shy away from tough subjects (Rocko being a sex phone operator comes to mind), Static Cling reveals that Ralph Bighead has transitioned to Rachel Bighead when on a journey to find herself. She was never satisfied with the achievements she earned in life and needed to get away from society to realize who she truly was.

What had stopped Rachel from doing this earlier is that she kept holding on to the past. Her memories of her father and the time they spent in her youth were preventing her growing as a person…well, toad. She kept trying to live up to everyone’s expectations, which caused her pain.

In a lot of ways, she is the stand-in for Static Cling’s existence. While it has never been officially stated why Rocko’s Modern Life was originally canceled, creator Joe Murray turned the series over to Stephen Hillenburg for the show’s fourth and final season. Murray had originally intended to make just a single season and was surprised when Nickelodeon decided to renew the show (especially considering its often racy humor). Maybe Murray didn’t feel like his creative side was being fulfilled in a fashion similar to Rachel. Maybe his letting go of the show was his own way to grow and find what was missing in his life. 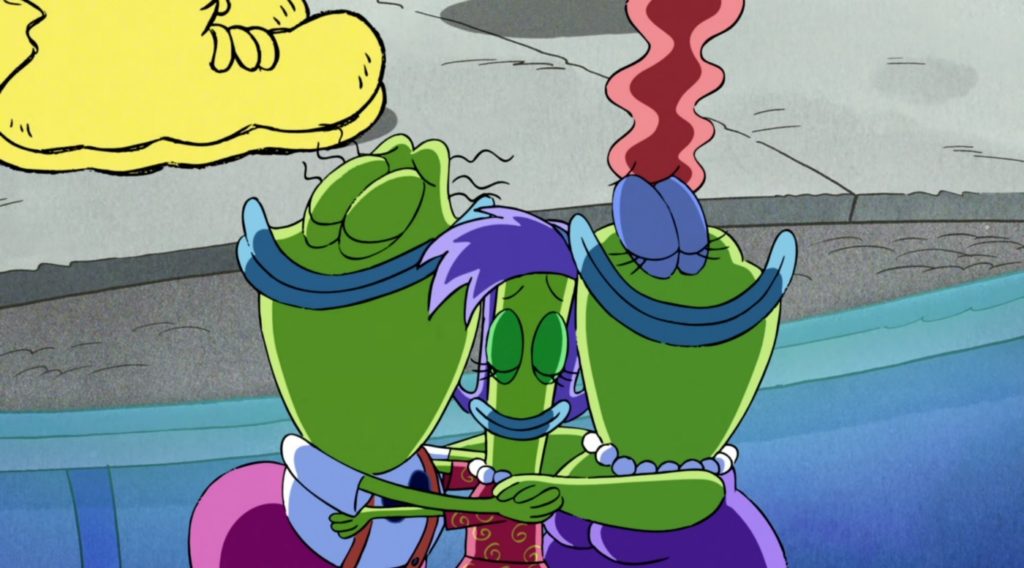 So with that in mind, Rachel agreeing to do a reboot for Rocko can be seen as accepting the legacy she started years prior. Her confronting Ed can be seen as Murray unleashing Static Cling onto the world. This moment is a double-layered message at how we’ve moved on from our pasts but still hold those memories dear. We aren’t always pleased with what we once were, but those moments come to define us and help us grow into better people.

The fear that Murray felt was likely that many fans would reject Static Cling. After 20+ years off the air, was Rocko’s Modern Life still relevant? When Rachael comes to Ed, he initially does reject her (spouting off the famous “I HAVE NO DAUGHTER” line). Ed reveals himself to be a bit of a bigot (surprise!) and says he is suffering from TMC –Too Much Change-. Finally at peace with herself though, Rachel continues on with rebooting The Fatheads and injects a pivotal moment from her youth that she hopes will get through to Ed.

When Ed sees the scene, he comes to realize a few things. Firstly, Rachel is still his child regardless of whether or not she has changed.  Secondly, letting go of expectations will help you realize your true potential. To Ed, Rachel was supposed to be this big success and bring fortune to the family. He was never happy with her insistence on breaking new ground, expecting her to stay the course and climb the corporate ladder. After decades of thinking this way, The Fatheads was finally able to break through to him.

That’s ultimately what Static Cling is about. Maybe it doesn’t realize the full potential of what a Rocko’s Modern Life reboot could be, but the creative forces behind it weren’t trying to please everyone. To them, this was the bookend to the long and storied history of Rocko that made the most sense to them. They did this for themselves and we were given the chance to go along on the journey with them. We can either reject it, like Ed initially did, or embrace that Rocko is slightly different, but ultimately still the same creation we fell in love with years ago.