0
All things held in balance

Welcome to our coverage of the London Film Festival 2020. I’ll cover some of this year’s press and industry screenings in bite-sized dispatches, picking out highlights of this year’s smaller releases. Take a look at Dispatch 1 for reviews of Siberia, A Day off of Kasumi Arimura, and Undine; and Dispatch 2 for reviews of The Reason I Jump, Wolfwalkers, Supernova, and The Cheaters.

Echoing a particular movement of Iranian cinema championed in the late 1980s, known as poetic cinema, Farnoosh Samadi’s directorial debut 180° Rule is a tragedy of operatic proportions. Focusing on the lives of a small family in Tehran, it deals with the overwhelming power of silence and its effect on the family’s life.

Sara (Iranian household favourite Sahar Dolatshahi) is a schoolteacher who is invested in the lives of her family and her students. A loving and wise mother, she dotes on her young daughter. Many of her students come to her for advice about intimate issues as she is trustworthy and kind. But this affection doesn’t extend to her marriage. Her husband, Hamed (Pejman Jamshidi), is, for reasons of his own, distant and cold. Though they have a beautiful daughter, it seems like she is the only thing they have in common. Not to mention that, in a Muslim community, Sara is not afforded many freedoms.

The family plan to travel to northern Iran for a wedding but, coinciding with some of his work commitments and a high-profile, but highly secretive mission, Hamed is detained. He unexpectedly forbids Sara to travel to see her family in the North and she bridles against these constraints. What follows is an intense, emotional journey with dire consequences. It raises many questions about personal responsibility and the constraints of a conservative, Eastern tradition that subordinates even the most vulnerable women.

The titular 180° rule is a principle maintained throughout the film, balancing two characters in each frame. The sense of space is poignant and, initially, I took the title to mean the constant sense of vigilance, with characters keeping loved ones (and enemies) in their periphery. 180° Rule is a lot like Kiarostami films in its attention to small detail and its casual observation of everyday life.

TIFF has confirmed that the narrative has come from personal experience or from that of someone close. In fact, it’s set to be the first installment in the filmmakers’ trilogy of films focusing on the themes of secrets and lies. Like For Sama, it focuses on a mother-daughter relationship that becomes defining for the central subject. Both deal with issues of war and pain, grief, and loss, while also looking for the glimmers of hope that can sometimes appear in such unspeakable situations.

180° Rule is not such an easy film to watch but it’s worth taking the time to consider. Farnoosh Samadi creates a strong sense of a realistic narrative and I had to remind myself that I was watching a reenactment, so powerful were the performances. This is a film that’s been thoughtfully constructed, deeply pondered by its filmmaker, and performed with conviction by its actors.

Ameen Nayfeh’s debut, 200 Meters, is a powerful account of the Israeli/Palestinian divide. Vividly shot, it’s also a warning about the dangers of fetishising other cultures with documentary-making. 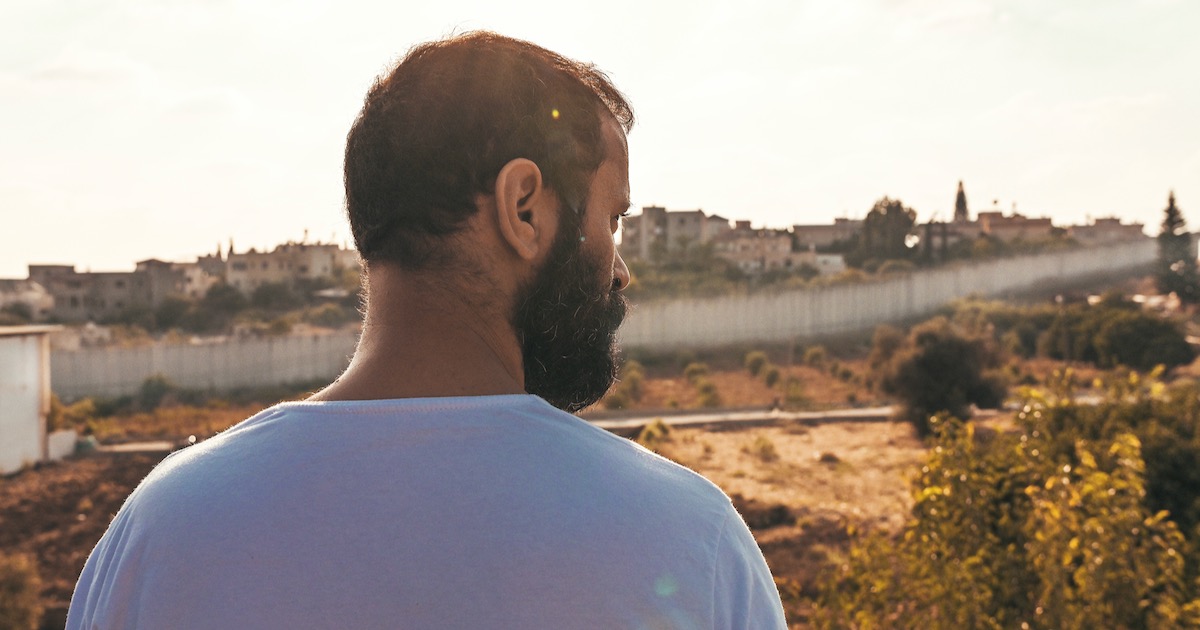 A Palestinian father, Mustafa (Ali Suliman) lives on the other side of the contested Israeli border. He regularly sees his wife, young son, and two daughters on the Israeli side. I enjoyed how he created a fun way to see his girls despite being stuck 200 meters away.

Residing on the West Bank side, he one day hears that his son is in hospital following a fight at school. What ensues is a dangerous journey to the hospital with a group of strangers: a driver making a living from locals and tourists alike; a documentary filmmaker from Germany, Anne, who hides a few tricks and is more than she seems; and a young man journeying to a wedding.

There’s a language barrier which means we’re never sure what’s true and what’s not, who’s lying and who’s telling the truth. Anne’s foreign presence with the group immediately causes suspicion and creates complications in their journey that couldn’t have been foreseen. Her relentless insistence to document every small detail of the trip is not only a pest to the locals, but trivialises many of the issues of separation that the residents face daily on each side of the border. Nafyeh is almost certainly reflecting and commenting on the process of filmmaking and warning of its dangers.

There’s no doubt that the film has great cinematography, and for a debut feature, Nayfeh shows talent. Sweeping landscapes, ultra high-res footage, and a view of life both sides of the border contributes to a film that is at once gritty and elegantly composed.

The central character Mustafa shows resilience and courage in the worst of circumstances and after going through so much, at the end of the film he decides not to take life for granted again. Despite the divide, he is devoted to his family. 200 Meters is a layered account of life in a difficult bridge between the two regimes and the lengths residents have to go to to keep connected with their families.