It seems rather humorous that after complaining about the slower pace of last week’s episode of The Mandalorian, I would end up greatly enjoying this week’s slow-paced continuation. Maybe that is down to the 17 years of election results that the United States has seen this week, but while time is standing still for the American people, Mando is continuing on his quest to find The Child’s home.

Starting off with a rather quick action sequence, the opening minutes of “The Passenger” are deceptive in what to expect. While not the longest episode of The Mandalorian, it still clocks in at 42 minutes and has maybe only 10 minutes of battle scenes. This is a surprisingly more character-driven episode than anything before it and I think that’s what is key in making it all the more enjoyable.

Mando may have been successful in obtaining more Mandalorian armor, but he’s not really any closer to locating more of his kind. After losing his speeder bike and needing to hoof it into Mos Eisley, he reunites with Peli Motto in the Cantina and receives a glimmer of hope: she knows someone that knows some Mandalorians. Mando just has to lose a bet, first. 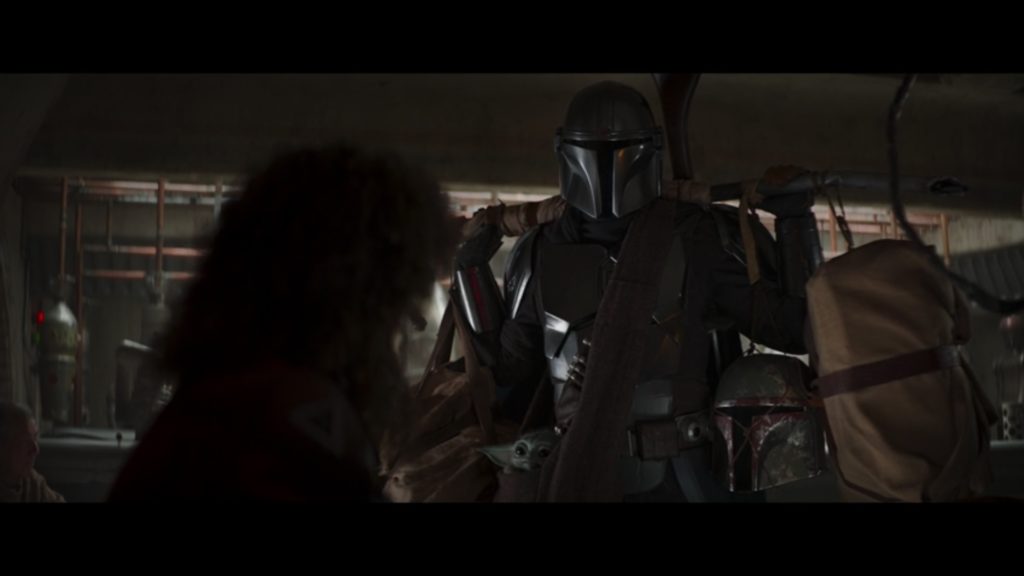 From here, the tone of the episode is set pretty well. Motto is cracking jokes and bringing a more comedic atmosphere to the proceedings while Mando is almost out of his element. It’s shocking how many times he gets duped or seemingly drops the ball, leading to a nice examination of what makes him tick.

Back in the hanger, Motto swears on her life that her contact’s information on other Mandalorians is solid. Having basically no options, Mando agrees and is greeted by some frog lady that he can’t understand. This lady is looking to receive passage to the moon of Trask where she’ll reunite with her husband who will fertilize her eggs, allowing their species to continue on. Oh, and Motto only met her 10 minutes prior, so Mando gets duped for the second time in less than five minutes.

In a twist that makes Mando uncomfortable, this frog lady has requested they do not travel at lightspeed because that will destroy her eggs. With nowhere else to turn, he reluctantly accepts the task and everything is set into motion. Mando, The Child, and Frog Lady set off and everything is going smoothly for a bit. Since the journey will be long, Mando prepares for some rest and tells the frog lady to take a nap. 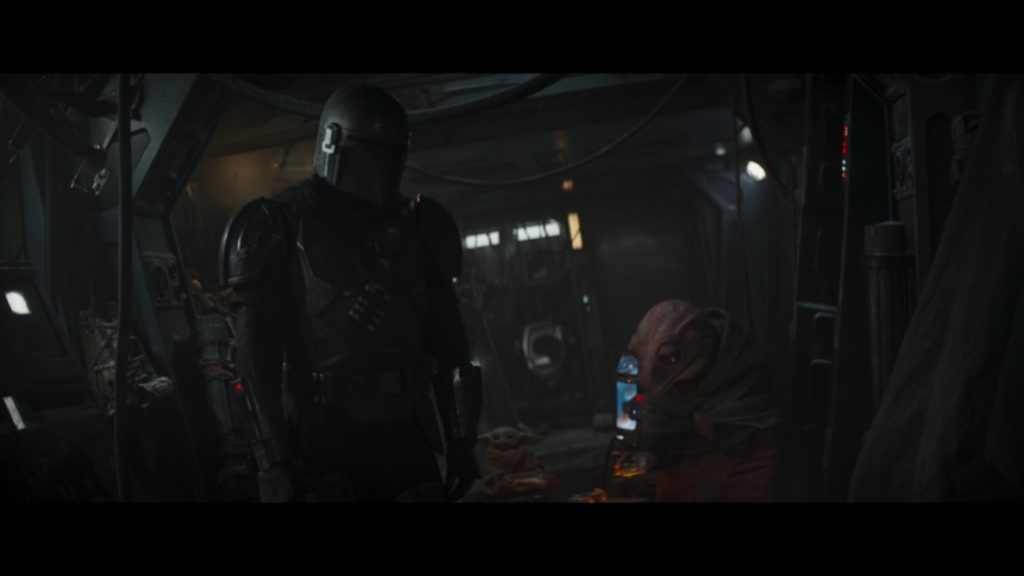 Down in the hull, The Child is getting up to his usual shenanigans and takes a keen interest in Frog Lady’s capsule that holds her eggs. Drawn to it earlier in Motto’s hangar, he pops the cap and starts to chow down on some caviar (or whatever you want to call it). Mando quickly stops him, but the scene adds yet more levity to an otherwise darker series. It also shows how despite how Mando is willing to take a bullet to protect The Child, he can also get quite annoyed with him.

I just want to take a quick moment to talk about the costume design in not only this episode but The Mandalorian as a whole. The Child has always been a wonder to watch since he’s some combination of puppetry and animatronics, but the frog lady’s full body suit is remarkable. There’s very little in the way of CGI to animate these creatures and it helps add a sense of realism to this world. She’s got an exceptionally expressive face and I’m just very impressed at how well everything looks here. Mando’s armor, too, gets progressively more disheveled as the episode goes on and it really sells the desperation of the whole situation.

Having stopped The Child and started his nap, Mando is woken up by a siren from the cockpit. While flying at regular speed in space, his ship is picked up on trackers by some X-Wing pilots. Since Mando isn’t broadcasting any kind of identification, they begin to interrogate him to make sure he’s not an imperial straggler, but communications quickly breakdown. Cue a rollicking space flight sequence that feels like it’s ripped straight from the main Star Wars films. 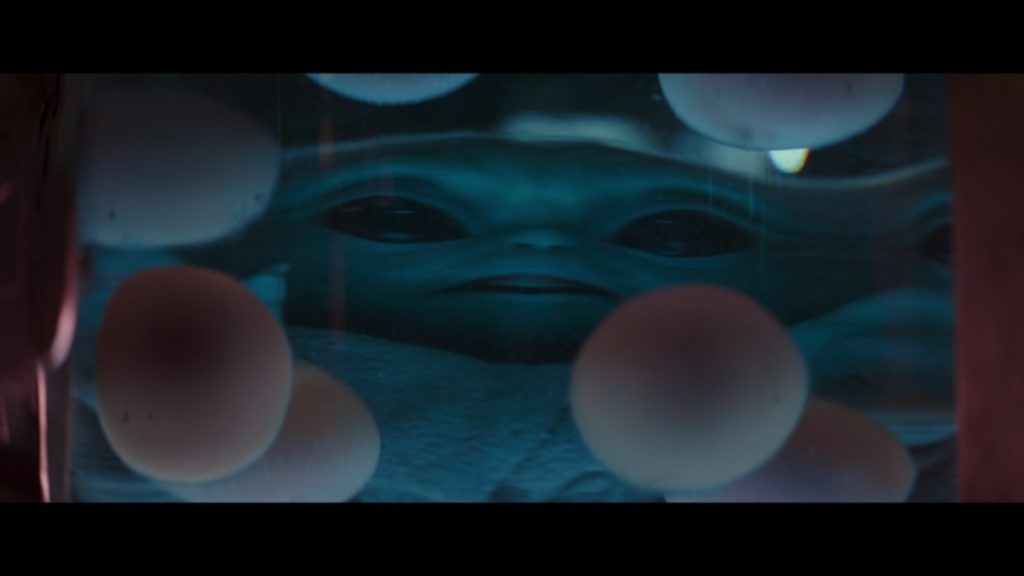 Narrowly avoiding his pursuers, Mando practically crash lands his ship on some ice planet that doesn’t seem very hospitable. With the pilots gone, he sets to take off, but the ice below breaks and plunges his vessel further into the depths of an ice cavern. Waking up sometime later, things are looking bleak and the frog lady is practically freezing to death. Doing a quick survey of the ship, Mando finds The Child sucking down some more eggs and stops him for the second time. With no real way to escape at present, Mando prepares for a long, harsh night.

The frog lady is having none of that. While Mando is asleep, she rigs up some kind of communication device from the severed head of Q9-0 (reprised by Richard Ayoade) that Mando has kept in his hull. She explains her desire to get back to her husband and even offers some tough words to Mando. His people live their lives by honoring their deals, but Mando’s refusal basically means the creed of the Mandalore is a bunch of nonsense. With newfound energy, Mando begins to repair the ship.

Some time passes and The Child comes to inform Mando that the frog lady has left the safety of his vessel. After working his way through winding ice caves, he comes upon her sitting in a hot spring. Obviously not a wise decision, he gathers her eggs up and stops The Child one last time from eating more before all hell breaks loose. The Child’s hunger is never quite satiated and he walks off to eat some weird spider thing. Either because of bad timing or The Child’s unquenchable appetite, an entire horde of spiders wakes up and begins to descend on the trio.  It’s now an epic race back to the ship for the finale and man does it deliver. 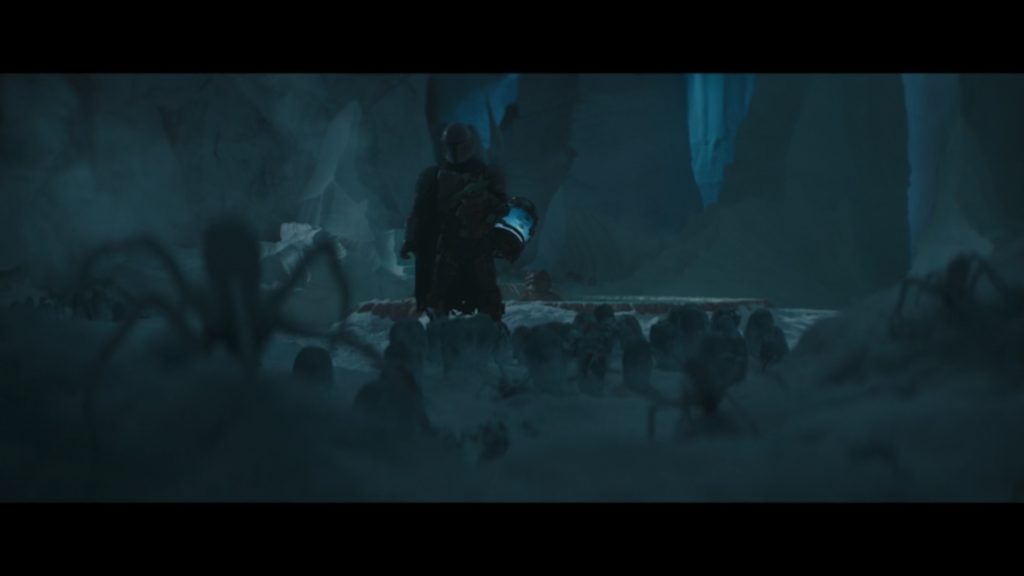 Practically cut from the cloth of the Alien franchise, Mando and the frog lady are narrowly avoiding these monsters while taking potshots at them when they can. There are some well-placed shots of the mother spider overhead and cheeky cutaways when Mando uses his flamethrower. It even ends in a ridiculous shootout aboard the ship before those X-Wing pilots swoop in to save the day. It’s thrilling if a bit clichéd.

Having typed this entire thing out, I realize how little plot there actually is in this episode of The Mandalorian. “The Passenger” is, for all intents and purposes, the definition of filler. There’s a small link to the main series plot of finding The Child’s home, but very little of consequence occurs throughout this tenth installment. That said, I still found myself gripped to the TV because of those expressive character moments.

The thing I’ve constantly complained about with The Mandalorian is that we still don’t have a clear idea of who the main character is. He cares about The Child and has shown his courage, but what really defines him? By setting him up against a character he cannot understand, this episode shows that deep down, Mando does care about the world around him. He doesn’t want harm to come to innocent bystanders, even if his detached demeanor says otherwise. 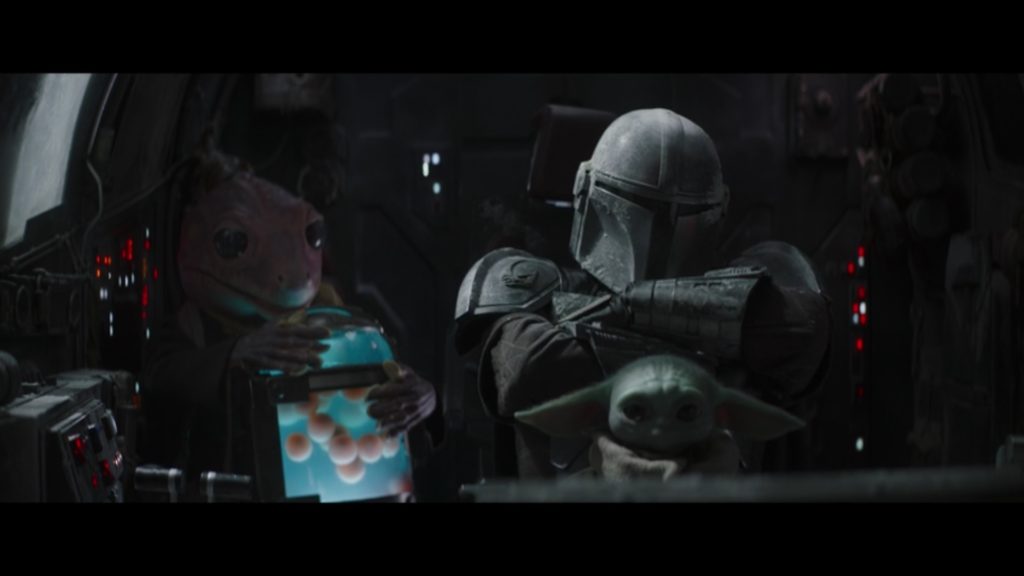 On the flip side of that coin, this episode also gives The Child a lot more to do than any episode before it. We’ve seen glimpses of him getting into mischief and causing headaches for Mando, but this is the first time that we get to see Mando at a disadvantage when it comes to The Child. That and this adorable puppet has a lot more time to smile and act like a kid, which is always appreciated in a character-driven episode.

I don’t know if The Mandalorian – Season Two can keep subsisting off of slower stories, but I wouldn’t be opposed to more episodes like “The Passenger”. We still have to figure out if last week’s shadowy figure was Boba Fett, though, so we’re bound to have something with a little more oomph next week.

Peter Dinklage will play Toxie in the Toxic Avenger reboot