0
Not quite the start we imagined

With all of the chaos that is happening in 2020, the premiere of The Mandalorian – Season Two sort of snuck up on me. I knew it was coming and even got somewhat excited in the morning, but then put off watching it for half the day as I just didn’t want to look to the past. We, as a society, are dealing with a lot right now and The Mandalorian hearkens back to an older time. I guess I just wasn’t in the mood for pure escapism, but I eventually relented as I started to hear some rumblings of how “amazing” and “exciting” the premiere was.

As I should have known, those early reactions were kind of overblown. This is precisely what I felt with the first season of The Mandalorian, which was overall good. There was a lack of characterization, some filler episodes, and generally decent-ish action, but the finale kicked things into high gear and ended season one right. Season two, so far, is kind of off to a slow start. 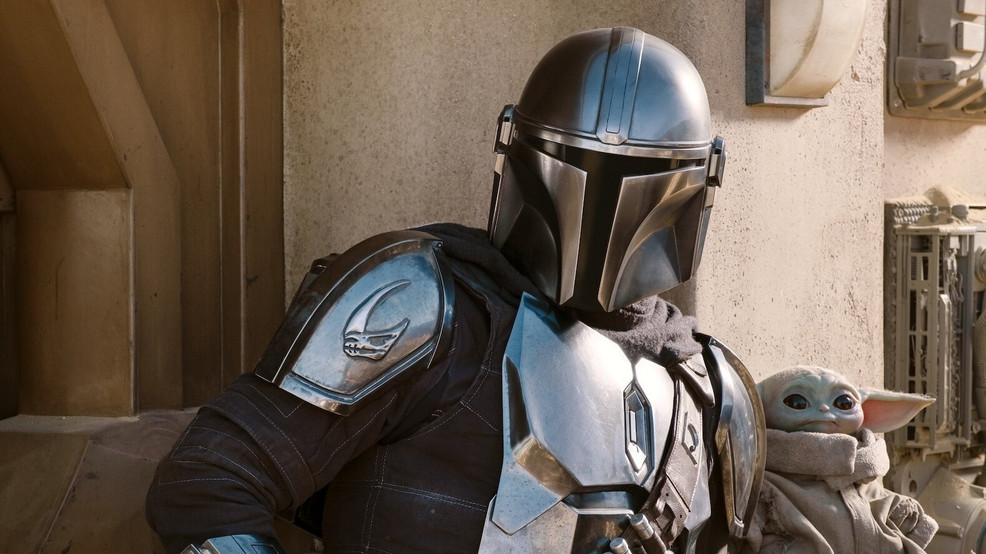 For those that either missed the first season or haven’t remembered every minute detail of what happened, Disney+ provides a short recap to get you up to speed. Considering the main plot amounted to “helmeted mercenary travels the galaxy to return a cute little green alien to its home,” I’m not sure you really need much else. The setup is basic because this show is all about evoking the feeling of classic Western films instead of presenting a clear cut plot with a through-line in each episode.

Nothing paints that picture better than “Chapter Nine,” the debut episode of this year’s installment in Mando’s exploits. In his never-ending quest to return “The Child,” Mando stumbles into an underground arena where he believes a dealer has info on other Mandalorians that may still be alive. Once that proves futile, Mando doles out an ass-whooping and we’re whisked away to Tatooine to relive some nostalgic shots from the original Star Wars films.

It’s an odd start not because the narrative is nonsensical, but because it betrays what most people said was their favorite aspect of the first season. The Mandalorian felt like a breath of fresh air because it shied away from cramming in pointless fanservice or even directly referring to what Disney has dubbed “The Skywalker Saga.” With the announcement that season two would include characters from said saga, the show wastes no time in throwing in some references to tickle the reptilian part of your brain. 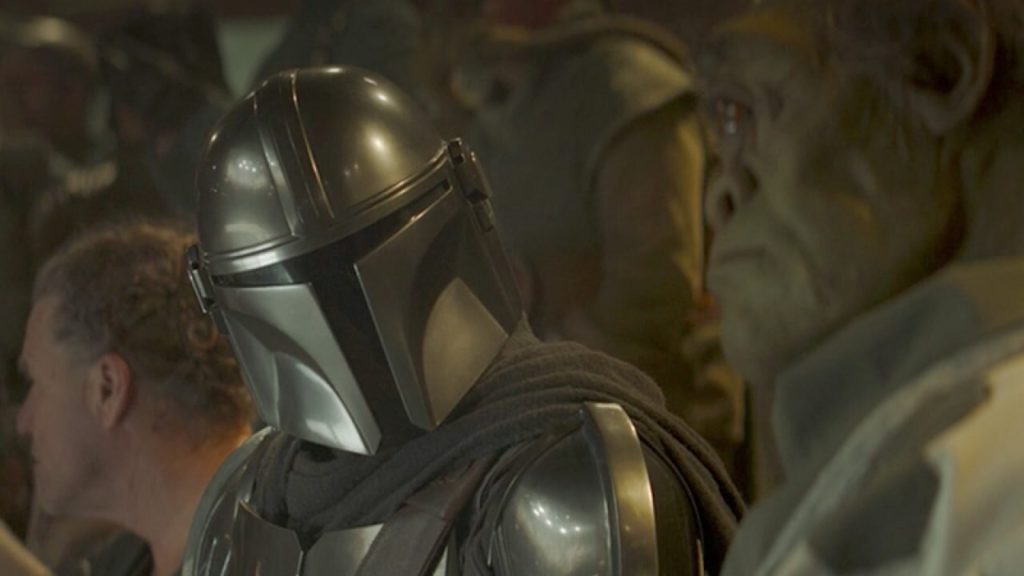 It even goes further once Mando touches down on Tatooine. Boarding his ship at Peli Motto’s spaceport (Amy Sedaris returns from her short stint in season one), Mando sets off for the uncharted town of Mos Pelgo to confront the unnamed person bearing Mandalorian armor. If you’ve followed the news about who will be appearing this season, then you likely know what this is building up to. If not, then this sequence feels dull and dragged out.

Upon reaching the town and entering a local tavern, Mando inquires about the so-called Mandalorian and is greeted with the shadowy figure of a person that looks like Boba Fett. As this person slowly steps into the light, we see that the shrouded figure is indeed wearing the armor of everyone’s favorite silent villain, but expectations are turned on their head rather quickly. The person removes their helmet to reveal that they are an average man and not a legendary warrior of the “the way.”

A brief standoff begins as Mando demands that this man return the armor to him. Before anything can happen, the duel is interrupted by some rumbling as a sand dragon makes its way through Mos Pelgo. Realizing the situation is bigger than simply a case of lost armor, Mando sits and listens to this man’s story. Cobb Vanth, Mos Pelgo’s marshal (played by Timothy Olyphant), recalls how his town was taken over by “The Mining Collective” shortly after the destruction of the second Death Star.

While he initially escaped into the desert and wandered for several days, he was retrieved by some Jawas that offered him their finest treasures after he hands over some priceless crystals to them. As you can guess, he chose to acquire the Mandalorian armor and used that to intimidate and drive out the Mining Collective from his village.

With an uneasy alliance now formed, the rest of the episode kind of just coasts along with little momentum. There are constant teases as to whether or not Boba Fett is still alive with the mention that this dragon, called a Greater Krayt dragon, may have eaten a Sarlacc some time ago. As I said before, if you had no understanding of the history of Star Wars, a lot of this would have no reverence for you. Unlike season one, season two seems to be leaning heavily into established lore and I’m not all that enthused by the embrace. 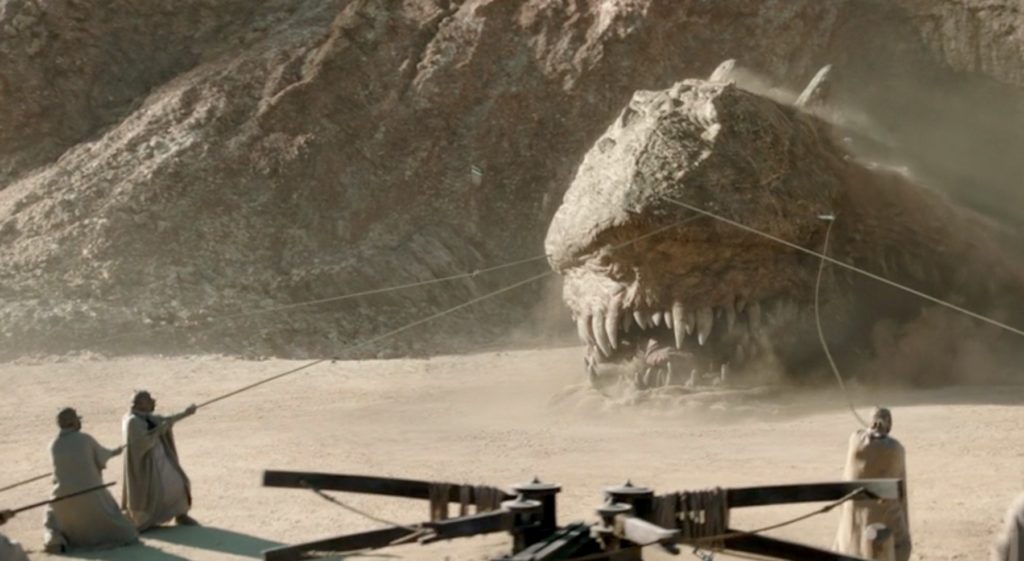 Mando and Cobb set out into the wilds to track the dragon and happen upon some Tusken Raiders. In a nice twist of fate, they also want the dragon vanquished, so Mando promises to lend them aid by volunteering the residents of Mos Pelgo to do the job. It’s just a lot of exposition that doesn’t reveal a whole lot about Mando, The Child, Cobb, or anyone really. We mainly go from scene to scene in a very linear fashion not focusing too long on any one detail until the next setpiece happens.

Likely as a way to kickstart the season, this episode does have some bombastic action sequences. The last 10 minutes are even filmed in a 16:9 aspect ratio, dropping the more cinematic 21:9 ratio to better showcase the new CGI effects. At least in this regard, season two already looks better. The Krayt dragon doesn’t seem out of place and the short sequence where Mando and Cobb are riding speeder bikes is blended well against a green screen. Those effects fail a little when Mando first enters Mos Pelgo, but that was likely down to COVID impacting VFX finalization.

After a fakeout where Mando appears to have been eaten, he explodes the dragon from within, saves Mos Pelgo, and has the Mandalorian armor returned to him. Mando isn’t necessarily any closer to figuring out where The Child belongs, but he’s cleared up a loose end and helped some people along the way. It’s rather humdrum, but the episode ends on the shot of some mysterious figure overlooking the desert and spying on Mando. In the least subtle tease of the episode, this is likely Boba Fett who is probably going to appear in next week’s episode -or shortly thereafter-.

I won’t go as far as saying this was a bad episode, but it was a relatively dull way to begin season two. All of the overly involved plotting, tons of exposition, and drawn out length (this episode was 52 minutes long versus the typical 24 of past episodes) didn’t really contribute to what you’d expect for a season opener. It doesn’t help that all of the dialogue kept pointing towards the existence of Boba Fett, only to then not really show him until the last few seconds if it even is him.

Director Jon Favreau clearly wants this to be more of a slow burn, which I can understand. It’s far better to stoke the flames of anticipation rather than just giving up the ghost right off the bat. Still, for the somewhat ambiguous ending that season one gave us, I guess I expected more of season two. I don’t really have fears that this latest string of episodes is going to turn out as a mistake, but I do hope The Mandalorian can gain some momentum in the coming weeks.

Disney’s DuckTales reboot to end in 2021