0
They're inside the computer?

Science fiction has come a long way since its inception, hasn’t it? Depending on your definition of the genre, Frankenstein is usually attributed as the birthplace of the concept in 1818. Nearly one hundred years later, that genre was explored further in film with the seminal A Trip to the Moonby Georges Melies. Since then, we’ve had the genre pushed to new heights and expanded beyond our wildest dreams, from War of the Worlds to Forbidden Planet to Star Wars to TheMatrix to Gravity. Bliss is just another evolutionary step in the exploration of sci-fi.

What made all of those films stand out from one another was the large impact they had on how the genre shaped itself, changing from pulpy stories to ones with more action elements, and now into even deeper and more complex explorations on a variety of topics (see the sci-fi works of Christopher Nolan), However, those films became successful and well praised due to their quality as a film first and foremost. Sure, their themes and ideas are compelling, but they’re still entertainment at the end of the day, something that Bliss struggles with quite a lot.

There are moments where the film raises and executes some interesting ideas, but the film fails to capitalize on them in any substantial way. Also, for a film starring Owen Wilson, there were exactly zero “wows” in this movie, so that’s already gonna be a hard sell.

Greg (Owen Wilson) is a man whose life is slowly spiraling out of control. He’s divorced and is distant from his kids, he’s about to get fired from his job, and he’s slowly losing his grip on reality. That’s mostly because the world that he lives in is not real. He meets a homeless woman named Isabel (Salma Hayek) who tells him that he’s living in a simulation, they’re both lovers in the real world, and they can manipulate the fictional world around them as long as they have special crystals. Since that’s a lot to take in, Greg is grappling with the life he has in the simulation, especially given that his estranged daughter Emily (Nesta Cooper) is trying to reconnect with him, and the life in the real world that he can’t remember.

Bliss has an interesting premise, one that offers up a lot of different avenues to explore. My knee-jerk reaction is to say that Bliss takes a lot of elements from The Matrix, but really the only similarity between the two films is the whole fictional world element. Unlike in the Wachowski’s sci-fi epic, the real world in Bliss is actually pretty amazing. We do hear about a time where life wasn’t all so good, but the impression we get from the scenes in the real world is that life is a utopia and sadness doesn’t really exist.

As explained in the trailer, the simulation that Owen Wilson and Salma Hayek find themselves in was one of their own creation, a part of a scientific experiment so people can be grateful for the lives they lead. The simulation, called Brain Box, is meant to be terrible and depressing, so when you eventually leave and return to the real world you’re all the more appreciative of the life you have in reality. 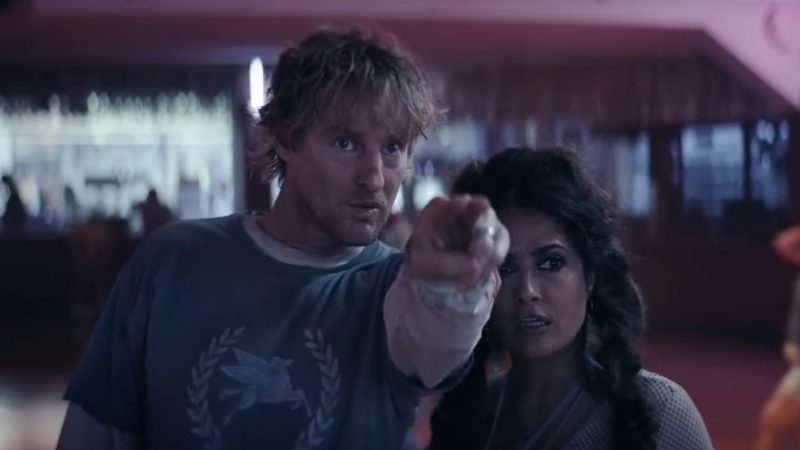 As far as themes go, that’s a pretty solid one for a sci-fi film to have, especially one that is focused on a romance. The dynamics between Wilson and Hayek are effective, where Salma Hayek is already deeply in love with him and Wilson slowly begins to fall for her all over again. We even get to see a brief snippet of Wilson’s behavior before entering the Brain Box and how he almost seems like a completely different character because of it.

I just wish the movie wasn’t so obvious with its analogy.

Life inside the simulation is bleak and without color, no one is at all happy, and crime seems pretty commonplace. Contrast that with the utopian real world and the metaphor couldn’t be harder to avoid. Because of this, as well as the revelation fairly early on that the world inside the Brain Box is meaningless, it makes a majority of its scenes frivolous and pointless.

We follow around Wilson’s daughter as she tries to get her brother to help out their estranged father, but it all rings hollow because their relationship, quite literally, doesn’t exist. How does the film expect me to care about fictional characters that have no impact on the main events of the plot? It does somewhat create an interesting moment where fantasy begins to encroach on reality, but that just raises more questions than answers. As is usually the case with most major sci-fi projects, its lofty ambitions, unfortunately, cause the movie to collapse in on itself.

The first half of the film takes place solely within the virtual world and it feels like a complete slog to get through. Once Hayek and Wilson meet and fall in love, a moment which is rushed and compressed to fit in the first twenty minutes until they exit the Brain Box it’s just a slow dirge until the inevitable. The two of them live their lives without any consequences and have a blast doing it, putting into question if the world itself is all that bad when both of them have an absolute blast throwing people around a roller rink like rag dolls. In an effort to lengthen the runtime, Bliss starts to undermine its very premise. 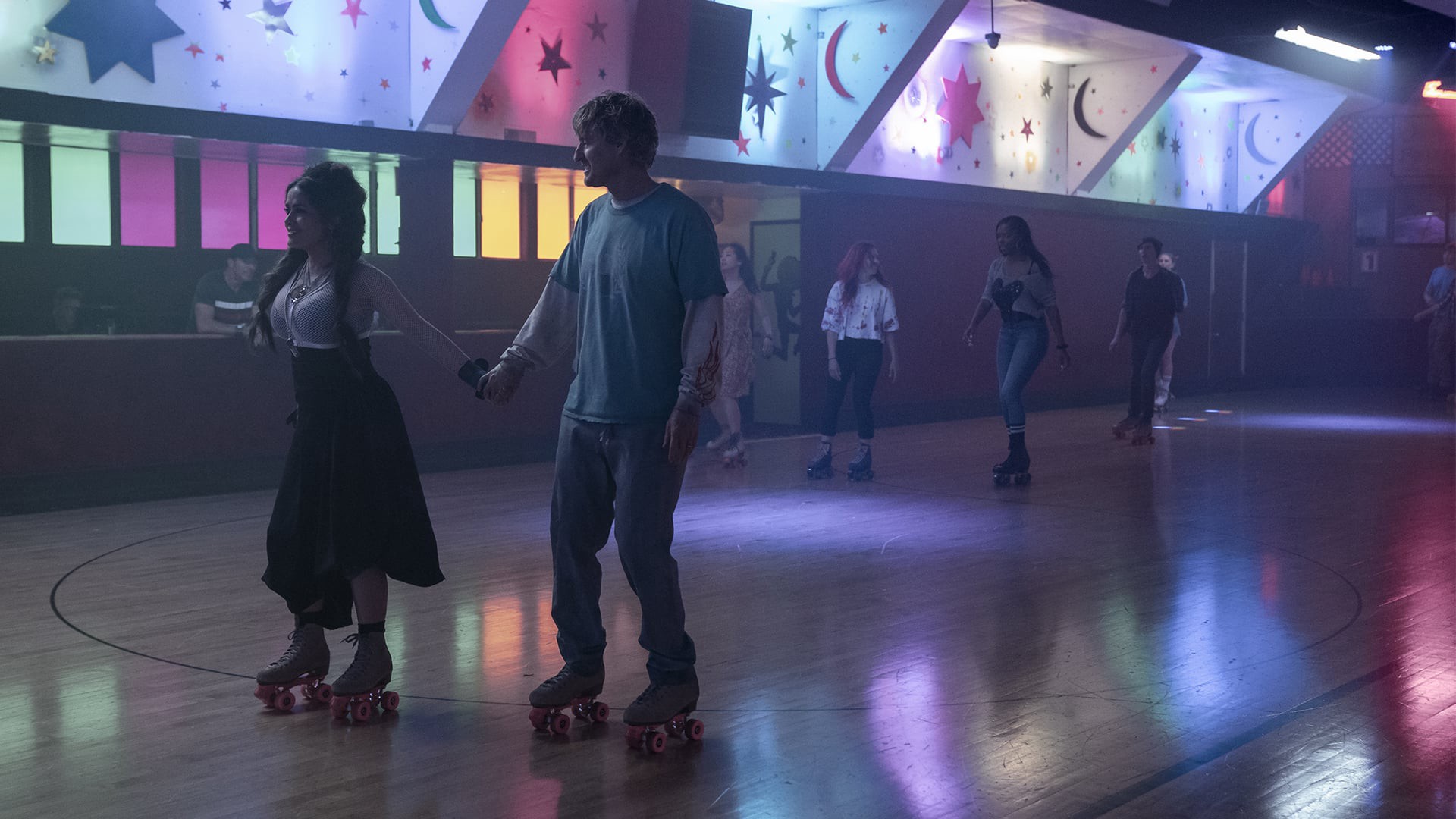 As far as the performances go, Salma Hayek is always a pleasure to watch and the scenes where she’s allowed to just act are the best the film has to offer. Wilson’s performance is a lot more understated. The best comparison I can make is that his performance has several elements lifted from Midnight in Paris where Wilson honestly just feels like a spectator to the action going on around him. It worked in Midnight in Paris thanks to the characters he interacted with, which is a lot coming from me since I hate Midnight in Paris with a burning passion, but here it just feels deflating and without anything to latch onto.

Mike Cahill’s films are usually these lofty sci-fi think pieces that don’t really do too well critically but has a devoted fanbase thanks to the ideas that he presents. From what I can gather Bliss is his most conventional film and while it isn’t particularly offensive or awful, it doesn’t do anything remarkable or praiseworthy. It has its ideas that could work but lose a lot of their luster as the film spins its wheels to a conclusion that seems all but inevitable given Wilson’s difficulty in adjust back to reality.

Look, this is a movie where the trailer tells you exactly what the plot of the movie is like. If you watch the trailer and it looks like it’s right up your alley, you should have an alright time. If it doesn’t look appealing, then you’re not really missing anything here. 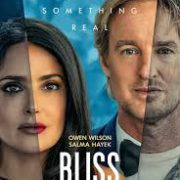 This movie is not worth your time. Sure, parts of it may work, but only parts.
4.4

With a lofty premise, Bliss' attempts to convey ideas about human joy and gratitude are lost in a fairly obvious and uninteresting execution that dampens whatever point the film was trying to make.