It’s strange to hear the name Borat in 2020. 14 years ago, the original film launched to critical and commercial success, but the character seemingly disappeared into the ether after star Sacha Baron Cohen took on different roles. Always known for becoming engrossed in his skits, the relative failure of 2009’s Bruno sort of put the final nail in the coffin on his controversial shock humor style.

Against all odds, Borat didn’t simply disappear after that film flopped. A few random appearances here and there have led to a full-blown sequel for Amazon Prime that was created in almost entire secrecy. Revealed in early September, it seems Cohen was busy taking to the streets right before the coronavirus pandemic hit and making an absolute fool of himself in the name of comedy once more. But does that kind of offensive, abrasive comedy still work in the modern era?

I can’t believe I’m about to this say, but Borat Subsequent Moviefilm may honestly be the actor’s finest comedic work to date.

I’ll avoid explaining too much of the plot for Borat Subsequent Moviefilm since a lot of the humor relies on surprise. I can safely say that having watched it twice (on the same day, no less) the film is still funny after repeat viewings. Still, I’ll give a very basic description of the proceedings to catch you up to speed on what you can expect here.

The premise of this belated sequel is that 14 years ago, Borat’s big Hollywood hit ended up making the nation of Kazakhstan into the laughing stock of the world. Sentenced to work in a labor camp for the rest of his days, a new plan is hatched to bring glory back to Kazakhstan that only Borat can achieve. It requires, you guessed it…filming another movie! This time, though, they’ll be documenting the delivery of a gift to Mike Pence in order to make reparations and get into America’s good graces.

As flimsy of an excuse as that setup sounds, there’s actually something of a secondary plot going on in Subsequent Moviefilm. Before heading back to the US&A, Borat returns to his home and learns that he has a daughter. First unwilling to take her with him -because men in Kazakhstan cannot show love to their daughters-, fate seems to intervene and the two are united on American soil partway into Borat’s new excursion. Cue the wacky shenanigans that Cohen is known for. 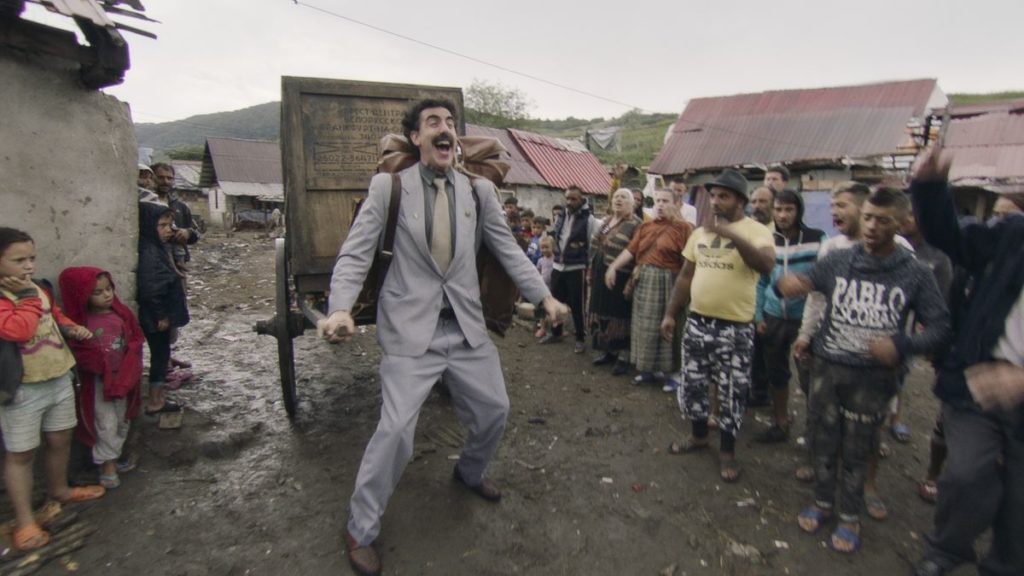 There’s a lot of ground to cover here, especially because the satire is very pointed. Years ago before I had even hit my 20’s, Borat was the funniest damn thing I had ever seen. I loved how outrageous, bold, and shocking the style of humor was. I also couldn’t get enough of this comedian kicking the ugly side of America and revealing its deepest, darkest secrets. Sadly, that type of comedy had a lot of real-world repercussions.

In the years since I’ve come to look at the original film as something of a cruel joke. Cohen obviously didn’t mean to hurt innocent people’s lives, but his antics could be likened to punching down on the weak. The laundry list of lawsuits brought up against the film shows that certain people weren’t fully aware of what was happening, which is ethically tasteless.

That’s what I feared would happen with this sequel. Instead, I was pleasantly surprised to see that Cohen has set the crosshairs on a far more deserving threat to American society: the government. Instead of kicking the public while it’s down and out, Cohen is punching up at both the Democrats and Republicans and showing them for the monsters they really are. Hell, the opening line in the movie calls Barack Obama an evil man that destroyed America. It’s not afraid of rustling some feathers. 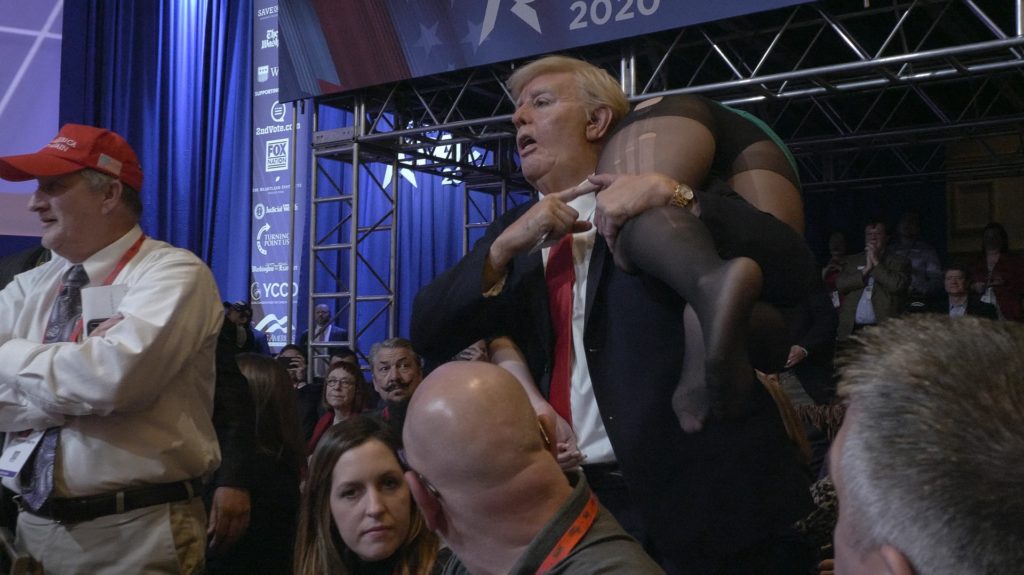 What’s truly fascinating, though, isn’t how the target has been changed. There are still a bunch of segments were ignorant racists spout off their moronic logic and make you question why America can be full of so much hate. No, the real twist is that Cohen isn’t truly the main star. Young actress Maria Bakalova portrays Borat’s daughter, Tutar, and is absolutely exceptional. If not for her presence, this film would be a tired retread.

Cohen is out there giving some of his best work in ages, but Bakalova steals literally every scene she’s in. Playing a 15-year-old girl that has been told lies her entire life, her progression from idealistic praise of her father to more outspoken bravery is heartwarming. She also has an absolutely wonderful interaction with her babysitter that does its best to teach women that their looks are not the most important thing, not to mention dispel most of the myths surrounding plastic surgery and society’s biases against women. 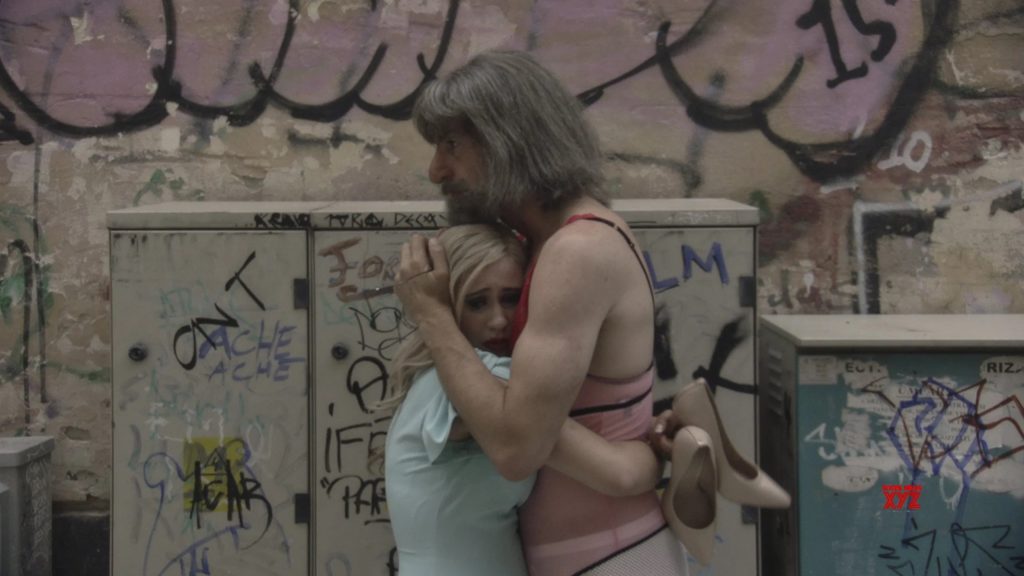 More than that, I’m surprised there are very few in the way of callbacks to the original Borat. As is the case with most modern attempts at long-awaited sequels, fan service laden references often distract from the overall story that a new sequel should be bringing to the table. With Borat Subsequent Moviefilm, you get a couple of “VERY NICE” and a few uses of “SEXY TIME,” but that’s it. The film doesn’t stop to nudge and wink about how the first movie was so great or even really do anything to remind you that it happened. This feels almost completely like a standalone movie.

That doesn’t mean everything works here. There are some jokes that either miss the mark or don’t make sense within the film’s continuity. There’s this whole segment where Borat shacks up with conspiracy theorists, but I’m not sure where that fits in or why these people were so accepting of him. It does give sharp insight into the twisted minds of anti-Democrat zealots, but then it also feels like everyone is in on the gag and the film is just pulling your leg.

Some of the progression from scene to scene is also way too convenient to have happened organically. I know a lot of this is down to Cohen filming skits and then assembling a plot afterward, but the editing ends up robbing the film of being truly surprising since it feels a bit contrived. I suppose that is down to the more structured plot the film has, but it doesn’t have the same kind of liveliness that the first movie had. 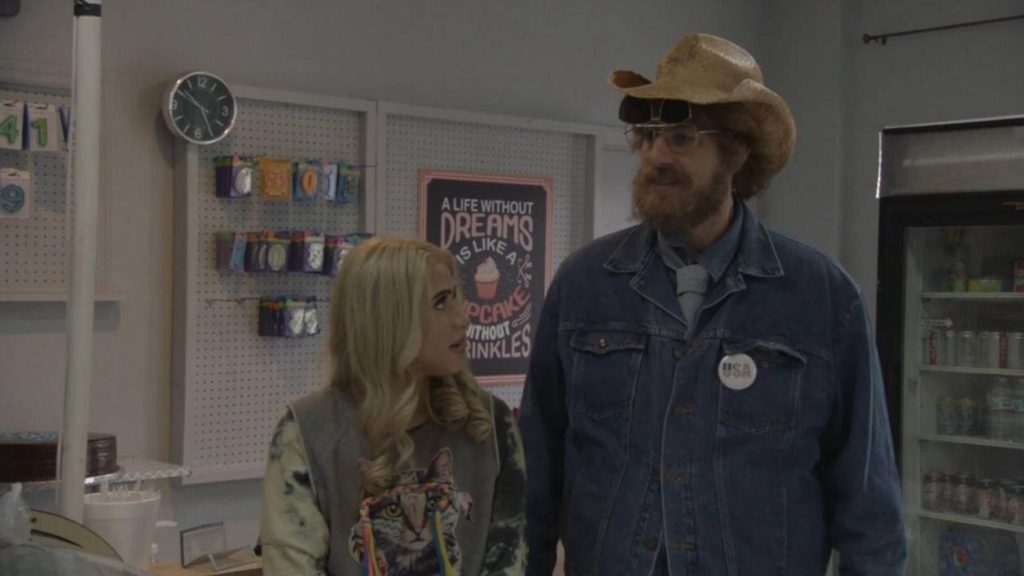 Even with those issues, I do feel that Borat Subsequent Moviefilm is an overall stronger movie than the original. Maybe it’s not as offensive and it certainly doesn’t always garner a laugh, but Cohen smartly decided against beating the pulp out of the average citizen in a time where that would feel plain mean. With the coronavirus pandemic showing no signs of letting up (which comes up in a few scenes), our politicians are the ones that really should be under the spotlight.

Only time will tell if society embraces this sequel to the same degree as the original, but I certainly enjoyed what I watched. I don’t know that Cohen could pull off this same stunt a third time, but maybe we just need another 14 years between sequels to again see how little this nation really has changed. 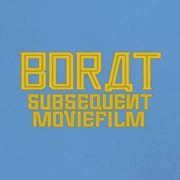 It’s easy to like this one. Some minor gripes here and there, but still fun.
7.5

Borat Subsequent Moviefilm is an overall stronger movie than the original. Maybe it's not as offensive and it certainly doesn't always garner a laugh, but Cohen smartly decided against beating the pulp out of the average citizen in a time where that would feel plain mean.