I don’t think I’m stepping out of bounds when I say that Castlevania, despite its flaws, is probably my favorite adaptation of any video game franchise in film or television. Sonic had a pretty fine debut and I will always have a soft spot for the Street Fighter movie, but there’s something so inherently awesome about Warren Ellis’ animated Gothic epic. It’s dramatic, gory, crass, poignant, adrenaline pumping, and dumb all at the same time and it’s kind of perfect. It’s definitely not for everyone, but there’s just too much charm here not to at least respect it.

It seems like most people love Castlevania as well since it’s been slowly but surely developing a dedicated fanbase and is quickly becoming one of the most in demand animated shows on Netflix, and when your competition includes She-Ra and the Princesses of Power and Bojack Horseman, that’s saying a lot. Season 2 had an expanded order of eight episodes compared to the first season’s paltry four, but now Netflix has given the team at Federator Studios another expanded order of ten episodes to essentially do whatever they want.

I mean that quite literally. With Season 2 ending in the death of Dracula and the day being saved, what comes next? What happens to our heroes now that the big bad of the series has been defeated? Set-up and character development appears to be the answer.

Set only a month or so after the death of Dracula, the third season follows four separate subplots as both major and minor characters from Season 2 either try to create a normal life for themselves or prepare for future vampiric battles that will surely come in to play in later seasons. Before I go any further, let me just be upfront with something; Season 3 feels like a breather. The plots introduced here are, for the most part, all wrapped up by the end of the season, though it’s clear that they’re just appetizers for the main course. In an effort to try and keep this review as spoiler-free as possible, given how the show just released this past Friday, I’m going to attempt to just give an introduction and my brief thoughts on each of the four major subplots. I will not be diving into any major spoilers, though I will be introducing the basic concepts of each character’s plot that may have some spoilers for events from prior seasons.

We might as well start off with the weakest of the four subplots, the plot dedicated to Alucard. While Alucard was such a badass in the first two seasons, delivering some absolutely delicious insults and meme fodder, outside of a searing introduction at the beginning of the first episode, our favorite dhampir barely has anything to do all season. Most of his screentime is centered on mentoring two vampire hunters in training who aren’t engaging in the slightest while Alucard barely does anything himself. It’s interesting to see how his character lives after his act of patricide, but not much is done with it outside of him remarking about it here or there.

It really did feel like Shankar and Ellis didn’t really know what else to do with the character now that his main arc has been completed, so they created a story for him that feels like complete padding. While there is plenty of delicious drama and action in all of the other plots, Alucard’s is just boring to sit through, despite having some wonderful atmosphere with the lush forests surrounding his new castle.

Our main focus of the season centers on the misadventures of Sypha and Trevor, who are now partners and traveling the countryside defeating night creatures for money and fun. One day, they stop in the tiny village of Lindenfeld where the local religious order are acting suspicious and openly talking about how they admire Dracula and are refusing to let anyone into their priory. The head of the village believes they’re up to something in there, so he conscribes Sypha and Trevor to investigate and, if necessary, stop whatever the monks are planning.

The bulk of the third season takes place in Lindenfeld, but most of our time is spent actually furthering the relationship between Sypha and Trevor. In prior seasons, they never really had a whole lot of time to spend together but Season 3 rectifies that by given them plenty of time to bond, cracks jokes, insult one another, and team-up to fight monsters. While I can say that they were both solid characters before this season, by the time this season reaches its end they became my favorite characters in the entire show, even surpassing the show’s dramatically rich and tragic depiction of Dracula.

Season 3 also introduces us to several new characters who look like they’ll become series mainstays, the most notable of which being Saint Germain. Saint Germain hangs around Lindenfeld and has an aloof yet calculated personality, always giving off an air of mystery and the impression that he knows far more than he’s letting on. While I did enjoy his earlier appearances, by the time the season reached its conclusion I found his presence to be fairly underwhelming. For such an interesting character, he’s given surprisingly little to do in the season other than just hang around Lindenfeld and interact with the characters there.

The rest of the new characters appear in the third subplot of note, which relates to Dracula’s former forgemaster Hector. After betraying Dracula and being captured by Carmilla, who looks to be our new central antagonist moving forward, Hector becomes imprisoned in her castle and slowly starts to befriend one of Carmilla’s sisters, a red-headed vampire named Lenore. From the moment they meet, I was worried that Hector’s subplot would become predictable, since Carmilla all but orders Lenore to bring Hector onto their team, but its carried by just how smart and well written Lenore’s character is. Despite most of their scenes taking place in dark and dank dungeons, the dialogue between the two livens up what could have been a drab subplot with littler identity to it. Most importantly, the foundation is laid by the end of the season for what will surely become the main plot of the inevitable fourth season, so I enjoyed what was here, if only because of the future possibilities that can arise.

But for my favorite subplot of the series, I would honestly have to given it to Isaac, the Forgemaster who was saved by Dracula after Hector betrayed their lord and master. Isaac is out for revenge and will do whatever it takes to kill Hector and continue fulfilling Dracula’s wish to exterminate all of humanity. While on his quest, Isaac actually has several conversations with both humans and demons alike about the nature of humanity, religion, life, and what constitutes good and evil. Isaac is usually left alone with someone for about a third of any given episode’s runtime and him and the other character just have a quiet conversation about philosophy. Credit where credit is due, Ellis is a wonderful writer who can find a way to have these heavy discussions and make them absolutely captivating while the next scene could have two characters talking about flaming demon goat shit.

While all four subplots vary in terms of entertainment and enjoyment, I can safely say that Season 3 has far less action compared to previous ones. Outside of a wonderful fight scene in the first episode and an entire episode featuring nonstop action, you won’t be getting any jaw-dropping fights like last season’s Alucard vs. Dracula fight. Season 3 is far more focused on taking a step back and fleshing out its characters before ramping up its action again.

And for the most part, it works. While some arcs definitely feel half baked, the writing is still strong, juggling drama and comedy masterfully, with several seeds planted for next season. The expanded episode count even works in the shows favors since no scene feels wasted or repeats information we already know. Every scene feels vital and constructs and incredibly strong season that had me glued from beginning to end. Maybe on repeat viewings my opinion may change, but as it stands the third season of Castlevania is easily the show’s strongest so far. 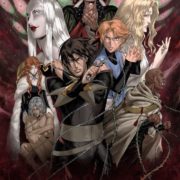 Maybe on repeat viewings my opinion may change, but as it stands the third season of Castlevania is easily the show's strongest so far.