Three and a half weeks into my own personal coronavirus quarantine, with theaters shuttered and tentpole box office debuts being pushed a year or more into the future, including ripple effects forcing major Marvel releases into 2022, things on the movie front have been a bit bleak. Enter Netflix and Coffee & Kareem. I wanted to be excited for this movie. Frankly, I needed to be. With both sports and Hollywood shuttered, any new goodness I’ve enjoyed has either been revisiting something old, or watching something old that’s new to me. But comedy, good comedy, has a shallower pool, offering fewer treats from the past that haven’t already been viewed. Thus, an Ed Helms cop comedy seemed just the thing. Here’s the thing: there’s an old saying about appearances and deception; don’t trust men with 70s porn-star mustaches. That old saying is proved true once again.

A) Ed Helms vehicle: you may think of Ed Helms in the same way I manage to, as a sort of comedy gold–maybe silver–on the comedy precious metals scale. This is a mistake. I suspect it mostly comes from his role in The Hangover franchise and his stint on The Office, two (deservedly) lauded and powerhouse performances that unfairly weight his comedy worth against a career filmography that’s not nearly as impressive. Other potential comedies worth seeing proved to be otherwise, including forgettable turns in We’re the Millers, Vacation, Love the Coopers, Father Figures, and I Do Until I Don’t. There’s a lot of nostalgic pull working for Mr. Helms born from an amazing television series that he joined late and helped anchor well after its peak, and from his key role in a trilogy that got worse as it went on, never quite recapturing the magic of the original. In fact, Tag is his only other recent work that sparked real joy–but that nostalgia factor still makes you bite at the promise of something potentially funny and new.

B) Betty Gilpin: while not an overplayed part of the marketing for the film, Gilpin is fresh in my mind for her turn in The Hunt, one of the last theatrical releases pre-coronavirus, and the last film I saw in a theater. Namely, she’s really the only thing the movie had going for it–and she owns every scene she’s in. Suffice it so say, she’s funnier in a (mostly) downplayed way there than she is here (more on that in a bit) when she’s really going for it.

C) Terrence Little Gardenhigh, aka Kareem, who should rank high in the list of epic names, and possibly top the list of the three-named-people. His screen presence, discernible in the trailer, is palpable, and there really is just something magical about young kids with Chris Rock mouths and minds. Good Boys really went for it last year and it wasn’t an unintelligent decision to try to capture some of that juice.

Which brings us to the ‘meh.’ In spite of the potential for comedy given the independent variables brought to the table, we’re left with middling filmmaking and mediocre comedy. Helms has the potential to deliver given the right material. His shortcoming seems to be in his ability to craft his own career and to make smart decisions in attaching himself to projects. And I’m not going to blame Gilpin, as she’s proven a broad range of acting ability, including creating some real highlights in The Hunt, a film more forgettable than Deep Blue Sea 2. Lastly, I can’t blame the kid–well, because, he’s a kid–it’s too easy, and he does what he can with what he’s given.

So who can I blame? Should it be director Michael Dowse, who’s at least batting one for three in feature comedy directorial roles with 2011’s Goon–one of the best sports comedy’s all-time (and Sean William Scott’s last and maybe best great role)? I’m going to say no–Goon is too good. We’ve got to aim our blame game light at writer Shane Mack, who’s credited writer roles are limited to this and three shorts. It’s unfair to judge someone purely on their resume, so let’s look at what didn’t work in the writing.

This is going to be a subtle and nuanced take, so get ready for it. Everything. Maybe the not-even-trying title loosely alluding to cop jokes should have warned me of everything that was too come, but it didn’t. The in-the-moment need for something to laugh about is quite strong these days, it turns out. I think the film’s major failings come from its use of racially-biased tropes–from the fact that it’s a white cop, dating a single black woman, with a teenage son, to the fact that the white cop is clueless, borderline inept, and unable to speak about race without sounding racist. Then there’s Taraji P. Henson (fantastic in Proud Mary, Hidden Figures, and Empire), Kareem’s mother, who instantly writes off Helm’s Coffee, the man she’s in a relationship with, as a serial killer, because all white men are serial killers, as a friend warned her, because of a stressful moment. It’s contrived, and becomes even more contrived, when Kareem describes her as an archetypal angry black woman who you literally have to taser to the point of unconsciousness to keep her from exploding.

It doesn’t help there’s very little to laugh about outside of this either. There are homages to the ear cutting scene in Reservoir Dogs and the poetic justice that Ed Helm’s gets to stand by and witness someone else get the blunt of a tasering when he himself was tasered in The Hangover, but they’re inherently unfunny situations. Similarly, Kareem could be a funny character. He’s an objectively funny kid, until he tries to hire someone to murder a cop, tasers his mother to what might be death (for all he knows), and shows zero remorse or growth for any of it by film’s end. Should comedies demonstrate character growth? Probably not, but when you choose to make a film about a young boy without his father (who died of cancer or something by the way) coming to grips with his mother dating another man, as your starting point … I’d say, possibly. Especially when the starting point is ‘I must murder this man.’

We’re not going to dwell on the delicate act of balancing realism and absurdism in comedy, and how movies and TV must own their course in choosing realistic and absurd elements, but we could! Just look at the cop comedy hall of fame: Lethal Weapon and Beverly Hills Cop. They are all realistic comedy takes that contain occasionally absurd moments, but they’re still grounded in realism, and they own that and it made them great. On the flip-side, you’ve got Brooklyn Nine-Nine which is absurdism through and through–and it works because it knows what it is. Coffee and Kareem is absurdism built around a too-real core that plays fast and loose with highly sensitive, real world issues.

Even Gilpin, who crushed her moments in The Hunt, another film with a terrible script, is wasted here. Her dialogue and her role are confused, inconsistent, and make no sense. She’s given so little to work with that she can’t even be funny in a real comedy when she’s borderline hilarious in a pseudo-horror film. If that case study doesn’t prove bad source material, I don’t know what does. Bottom line: I got much more enjoyment learning about Ozzy Man Reviews two nights earlier, than I did from Coffee & Kareem. 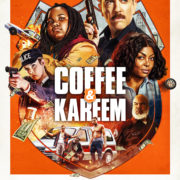 Coffee and Kareem is absurdism built around a too-real core that plays fast and loose with highly sensitive, real-world issues.