We all know the story of Cupid, the mythological deity of Greek–er Roman? Okay, actually I don’t anything about him. Thankfully, the opening five minutes of Cupid the horror movie retell his tale in what I’m sure is a faithful yarn. A book opens, and then we’re left to stare at pages as animations similar in quality to those My Story games sweep across the spread as the two hands holding the book remain conspicuously still. Toward the end of this legend, however, our narrator decides to let us in on the truth about Cupid–and it will shock you!

Apparently, instead of his arrow rejuvenating his fallen lover, its tip was actually poisoned, killing her and causing Cupid to hate love and everything to do with love and use his arrows for murder instead. That’s right. Cupid’s emo now, and he’s out for revenge!

Cupid, after sealing a pact with the god of death, is now summonable by any black magic-inclined teen in the world. This naturally leads to some complications–meaning people end up super dead for minor transgressions that seem like very big deals to the unstable emotions of the recently pubescent. The other issue is that Cupid seems to only be able to dispense his anti-love on Valentine’s Day, which makes no sense. Sure, Cupid is an unofficial mascot of the holiday, but there’s no reason he’s bound to it. I’d be willing to buy that he just happens to start going full Conquest on some teens on a single Valentine’s Day, but the fact that two different Valentine’s Days a year apart from each other are the only times we see him knocking out eyes with his wood rockets raises suspicion. Wouldn’t this make more sense if our slasher were a murderous Saint Valentine instead? Food for thought.

I could build a castle of quibbles from all the imperfections of Cupid: Half the actors are running on batteries, the CGI is bad (though thankfully sparing), a boom mic dips into frame, the practical effects are uncomplicated, Cupid’s creepy calling card is nothing but a GIF of a heart. This is a trashy B-movie, however, and it would be disingenuous of me to pretend I didn’t see any of that coming. If these do sound like abhorrent affronts to cinema to you, however, then you may have to face the shocking revelation that this low budget slasher about a killer Cupid is not for you.

I say this, because Cupid is actually an enjoyable enough watch, if you’re able to set that sort of quality aside. It’s fun, over-the-top, and creative enough where it counts. It’s not any cult masterpiece of trash, but for a seasonal novelty it does work.

The plot itself is simple stuff. High schooler Faye (Georgina Jane) is desperate for love and turns to black magic, perhaps because her mom is boning another student’s dad all day long, or maybe she’s just bored. She attempts a love spell on studly teacher Duncan (Michael Owusu). He’s naturally uninterested and is instead chasing after Heather (Abi Casson Thompson), another faculty member.

Good god their romance is such a brazen and bizarrely artificial display that you might think it’s intentional. The two are at constant odds to out robot each other with fake smiles and half-hearted laughs. Were they even in the same room? It appears that they were, but I have to wonder. You can’t possibly look another person in the eyes and have this little chemistry. I just don’t believe it. It’s the least love I’ve ever seen in a Valentine’s movie, and it’s sort of amazing. They don’t do much better with the students, either. At one point Heather needs to reprimand some real shit kids, and she grits her teeth and squares her hips and puts on such a strange approximation of anger that I’m pretty sure she’s never experienced a moment’s fury in her entire life. Good for her.

Anyway, Faye’s crush is discovered by mean girl Elise (Sarah T. Cohen) who just so happens to be the daughter of the dude Faye’s mom spends her time smashing on the living room couch. Elise has a score to settle, so she steals Duncan’s phone and convinces Faye to send some revealing pics and make a move on the teacher after class. This elaborate prank concludes with an uncomfortable and surprisingly resonant bit of bullying, helped by the fact that Georgina Jane and Sarah Cohen are embedded in their roles. Jane carries Faye with huddled anxiety and draws sympathy while Cohen steals just about every scene by unleashing torrents of effortless and sublime bitchy self-importance. Cupid would not hold up without their commitment.

After the prank, Faye cuts her deal with the gravel-voiced god of death, demanding to have all love destroyed in a way only a heartbroken teenager could. Thus, Cupid descends on the school, and his massacre takes the lives of all Elise’s friends. In the face of this, Elise demonstrates a boldness and devil-may-care attitude that I hoped would culminate in a more heroic turn, but alas she suffers the usual villain’s end.

Having a central monster like Cupid, whose main mode of murder is by arrow, should make for some not-so-compelling mayhem, but writer/director Scott Jeffrey is clever enough to work around that fault with campy dark comedy that raises the whole. Sure, there are plenty of sharp sticks skewered through eyes, legs, and arms. The effects aren’t bad, but you never see the arrow pierce flesh, so it lacks some punch. After a while, these kills should get tedious. However, Cupid starts tearing into a girl’s back with a heart-shaped cookie cutter. At first I thought it was meant to be some kind of blade, and all the production could afford was a cookie cutter–but I was wrong! Some tired teens putting together the school’s Valentine’s Day dance are later treated to a plate full of heart-shaped cookies that taste oddly of chicken, and with that small gesture Cupid won my heart just a bit. It’s dumb, and that’s the point. It’s amusing and creative, and low budget horror is often at its best when it leans into itself. If nothing else Cupid knows when to lean.

Would Cupid get my Valentine? Probably, not. I’m still hoping Verotika will call me back. All said, it’s brisk, boasting enough invention and cheek to blend unintentional and intentional humor into something fairly enjoyable. Cohen gives one head-turning performance, but the film never quite offers enough in spectacle or writing to become your special something. It’s an acceptable backup, though, if your plans don’t work out. Just make sure Cupid knows you two are going just as friends. Nothing more. You don’t want to give it the wrong idea. 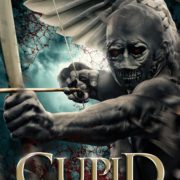 Cohen gives one head-turning performance, but the film never quite offers enough in spectacle or writing to become your special something. It's an acceptable backup, though, if your plans don't work out.