Once in a generation, a musical comes along to change what it means to be a Broadway musical. Sure, shows like Hairspray, Cats, and The Lion King may have mass-market appeal, but they really haven’t changed the face of musical theater. I would argue that Rent was the last big musical that exploded in popularity, critical praise, and pop culture appeal. That is, until Hamilton began to play in 2015.

The musical quickly became a pop culture phenomenon in months and devoured the Tony Awards that year. Tickets (you know… when Broadway was open…) would sell for hundreds, sometimes thousands of dollars. It’s not an exaggeration to say that to have a ticket to see Hamilton was the equivalent of getting a ticket into Willy Wonka’s chocolate factory. It was extremely hard for people to see the show, especially with the original cast.

Given the current state of affairs thanks to COVID-19, Broadway will be closed for the remainder of 2020, movie theaters are closed until distributors think it’s safe to reopen, and there are hardly any new releases to tide of moviegoers. Earlier this year, Disney purchased the film rights to the filmed stage recording of the original cast to the tune of $75 million, which was originally set to release in October 2021 in theaters. Instead, as a special 4th of July present, the stage adaptation has instead been released on Disney+ for all to watch. Now what was once impossible to watch is readily available at your fingertips.

(Disclosure: One of the cast members, Okieriete Onaodowan, and I graduated from the same high school and we both have had the same acting teacher for several years. While I have indeed met him and interacted with him occasionally, this review is not indicative of my relation to him.)

The story of Hamilton naturally centers on one Alexander Hamilton (Lin-Manuel Miranda), a young man who moves to New York from the Caribbean and becomes involved in the American Revolution with several allies, most notably his future rival Aaron Burr (Leslie Odom Jr.). We see Hamilton go from being a random brash teenager in a bar to having a position alongside George Washington (Christopher Jackson), eventually becoming one of the Founding Fathers of the United States and creating the U.S. Treasury. Throughout the musical we see Hamilton go through his life obsessed with one question; what will his legacy be?

Before rushing to see this movie thinking that you’re going to get a film adaptation of Hamilton, let me just pump the brakes on that thought. This is, quite literally, just a filmed version of the show. That isn’t to say that someone just plonked a camera in the middle of the audience and called it a day though. There are dramatic camera angles, cutaways to different shots, and occasionally a wide shot so we can see the stage. There are a few interesting uses of camera angles, like one instance where we see an aerial shot over centerstage of the set rotating, but a vast majority of the shots are static. As someone who has seen the show, it can be aggravating at times since so much of the action on stage is cut off and hard to discern what’s going on outside of what the camera wants you to see. There will be some flashes to ensemble dance numbers, but for the most part, it’s all eyes on the main cast. One of the biggest appeals of seeing a Broadway show is seeing the scope of the stage while also sharing an intimate live space with the actors. Strangely, this recorded version neither captures that scope or the intimacy with the absurdly good cast.

Speaking of, it’s next to impossible for me to think of any criticism for any of the acting and singing in the show. Nearly every cast member brings their A-game and while one could make the case that the film just stitches together the best version of all of the shows they filmed over the course of several days, they’re still just absolutely wonderful. There’s nothing quite like seeing Daveed Diggs as Thomas Jefferson bounce around on stage and bring the character to life. Hamilton put all of these performers on the map for a good reason. They’re just outstanding. 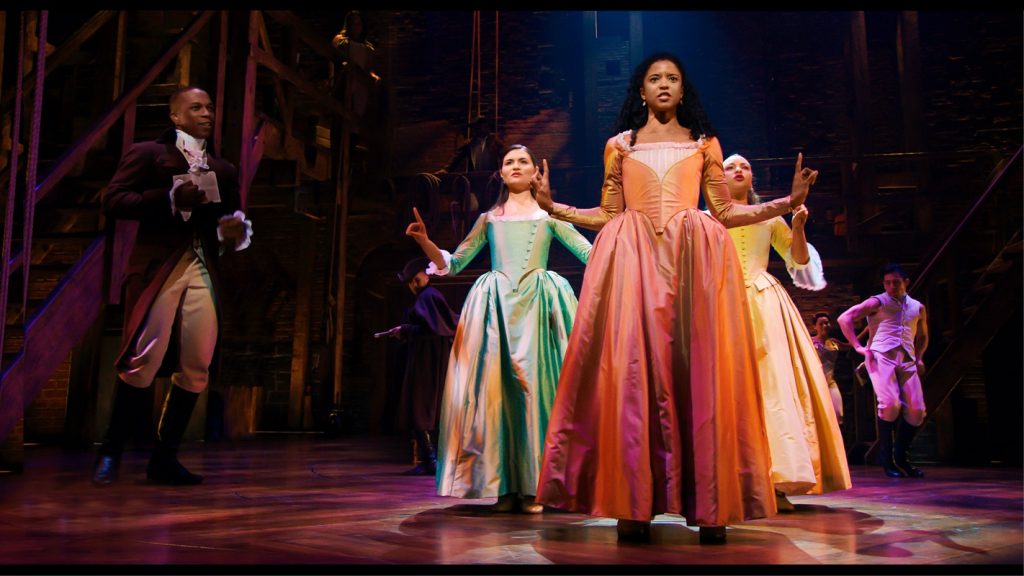 Hamilton is unique in the world of musical theatre because it’s an opera for the 21st century. Featuring a healthy mix of R&B, Rap, Pop, and a smidge of classic Showtunes, all of the songs are strung together to tell one cohesive story with no breaks. All of the dialogue is woven into the songs and are then used to progress the plot. There are so many songs here that even if you don’t like one in particular, you’ll have another one to look forward to in two or three minutes. This is the textbook definition of what a musical is; a story told through song. Sure, not all of the songs in Hamilton are winners, but when they hit, they hit it out of the park more than A-Rod.

“My Shot.” “Satisfied.” “Helpless.” “Alexander Hamilton.” These songs transcended the stage and stand out as being instantly recognizable to general audiences. They all are able to tell complex and concise stories and make it look effortless. Each of these songs contains basic motifs for certain characters that carry with them throughout the rest of the show and should be regarded as textbook definitions on how to structure musical theatre. But for as good as these songs are, and they are excellent, they’re all crammed into the first half-hour of the movie/show, presenting the biggest problem I have with Hamilton. Hamilton blows its load too soon.

Nearly all of the best songs in the show pop up in Act I and while there are some genuinely entertaining songs in Act II like “The Room Where It Happened,” the movie can’t escape the fact that it loses a lot of steam in its second half. By the halfway point of the show, the Revolutionary War is won and now even the characters are left to ask what comes next. The answer is a bit aimless as the show wanders from subplot to subplot, daisy-chaining them together until a narrative somewhat forms. By that point though, there are only a few minutes remaining and things just eventually end. There’s hardly any buildup to what happens in the second act and, at worst, the show is spinning its wheels at that point.

I’m not going to bother to get into the historical inaccuracies present within the show because no one really cares about that stuff except for history nerds like me. Needless to say, there are plenty of accurate moments and just as many, if not more inaccuracies. Pretty much all of those inaccuracies are in the second half of the show (no, Hamilton didn’t duel Burr over the events of the election of 1800, it was in 1804 when Burr ran for governor), but it never once detracted me from enjoying what I was watching. 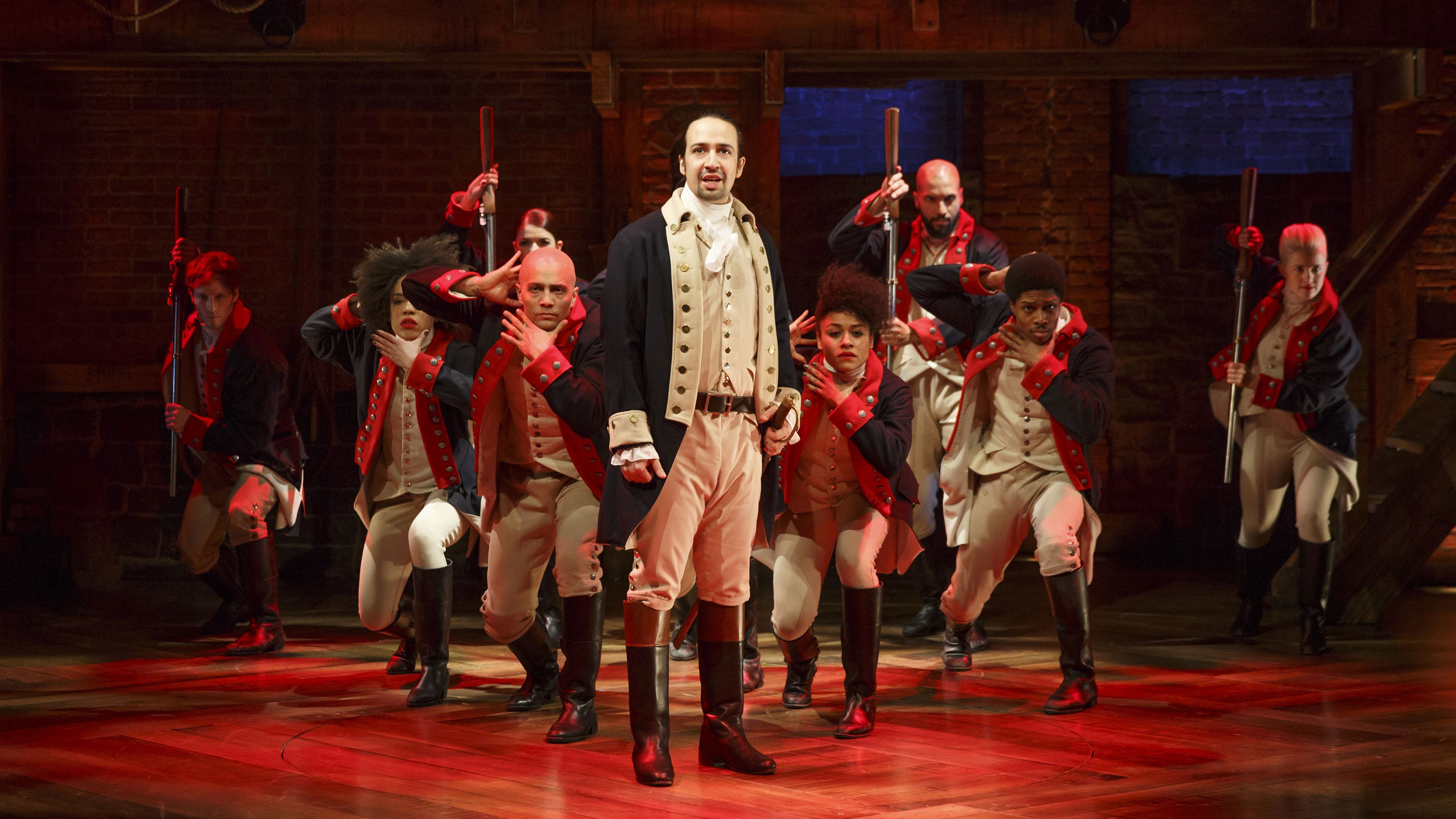 With very little positivity in America nowadays, seeing something as thrilling as Hamilton did help to boost my morale. Hamilton is a story about legacy and the impact that we will have on future generations and the world, which is something that I’m sure is on a lot of people’s minds nowadays. In fact, there are plenty of themes that can be mined out of Hamilton and no one person will walk away from it feeling the same way. This is a movie that creates discussions, which is something we need a lot more nowadays.

If this seems like more of a review of the show rather than the movie, that’s kind of because it is. This is literally the show, just filmed, and it comes to Disney+ with all of its strengths and weaknesses. This is a historic show/movie for a variety of reasons, but it’s remarkable that the filmed version is as good as it is. After years of seeing ho-hum filmed stage musicals like Shrek the Musical (Yes that exists), Hamilton is arguably the best of the bunch based on the strengths of the source material alone. It may not be the musical of all time, but it’s one that does deserve the reputation that it has earned and is a treat for fans of the arts at a time where the theatre community needs all of the support and aid that it can get. 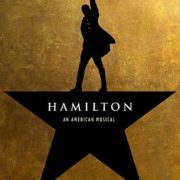 As a fairly good recording of a great show, Hamilton is bound to scratch that musical theatre itch and save you hundreds of dollars in the process.