One of the amazing things about the original Jurassic Park is its ability to create wonder. No matter how many times I watch it, the reveal of the dinosaurs at the beginning of that movie is awe inspiring. I get goosebumps every time Sam Neill shakily lifts his glasses from his face and the score kicks in. It’s a film about the wonder of life, and man’s role in that.

The Jurassic World films are not that. They’re monster movies, and that is, of course, OK. The original Jurassic World was fun enough as one, and still maintained some of the childish wonder at just how cool dinosaurs are. It had charm. Jurassic World: Fallen Kingdom does not. It takes the themes of the original movie, and the plot of its predecessor and mushes it all into what amounts to almost nothing. There’s no wonder here. No goosebumps moments. It’s that wonder of dinosaurs turned into the franchise of dinosaurs.

Fallen Kingdom kicks off with a moral question that teases a movie that might actually want to do something interesting. The dinosaurs living on the island where the Jurassic World theme park was are all about to go extinct thanks to a volcano that’s erupting. Should humanity save them or should we let them die as they were never really supposed to be around in the first place and they enjoy killing people? While most of the world decides to let them die a much-softened Claire Dearing (Bryce Dallas Howard) is working to get someone to rescue them. Thankfully, Benjamin Lockwood (James Cromwell), who helped create the dinos originally, pays her and Owen Grady (Chris Pratt) to return to the island and rescue a few, including our boy Blue, the velociraptor.

Dinosaurs back on mainland, evil idiots doing evil things, a kid somehow getting involved. Yadda yadda yadda. As no one has learned anything from any history ever, shit hits the fan and almost any thematic questions are tossed out the window to once again have a genetically modified monster movie, but this time without any of the fun or creativity of the first. 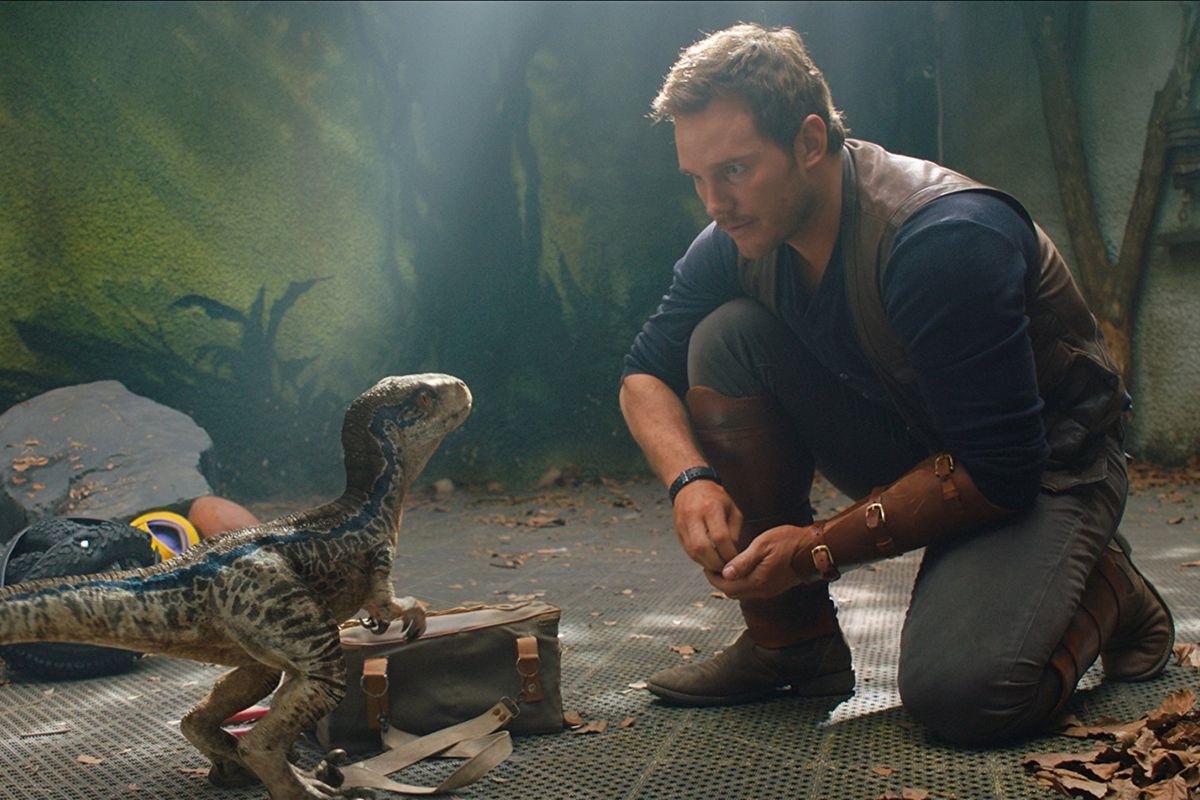 There’s a moment in Fallen Kingdom where our heroes are trapped and reflecting on the first time they saw a live dinosaur. It’s supposed to be the film’s equivalent of the aforementioned scene from the original (the timeless Jurassic Park score even kicks in), but it is so out of place in a film that carelessly throws dinosaurs around the screen that it caused me to sneer with cynicism. There’s no feeling to the film, it’s just CGI dinosaurs and a bunch of people doing stupid things over and over. It’s hard to even enjoy it as a monster film as nothing feels cheesy enough, and the movie keeps trying to lay on the moral quandaries but doesn’t actually care about them. There’s nothing here but the repeated and hollow roars of a franchise that used to have a soul.

A lot of the blame needs to fall in the lap of J.A. Bayona, who seems to have ditched the originality and creativity that made A Monster Calls so good for straight up plagiary. You expect sequels to repeat the key shots of their predecessors here or there and give fans something to cheer about, but Bayona never does anything of his own to make the movie new. The iconic T-Rex moment from Jurassic Park is repeated over and over, and if he had done one more dramatic push into the mouth of a screaming dinosaur I would have thrown up from motion sickness. At no moment does anything in the film feel truly original, more a collection of scenes that hit a franchise checklist, all of which previous films in the franchise have done better.

The film has some redeeming value here and there keeping it from being a total trainwreck. The beginning of the movie features a prolific escape sequence amidst a volcanic eruption. It’s loud, and big, and everything a monster movie should be. It even contains the one emotional moment that actually functions in the film. Sadly, it’s at the beginning of the movie and you have to slog through the rest unless you’re smart and leave early.

Pratt does his best with what he’s given, but that’s not much, especially as a host of other new characters are shoved in left and right for us to not enjoy. There’s a new tech guy who hacks everything, and the manic pixie dream girl who does doctor stuff, and the big evil guy just out to make money who yells at the contractually obligated child. Why every movie in this franchise needs to have a child is beyond me, but Maise Lockwood (Isabella Sermon) has got to be the dumbest excuse ever. I’d be spoiling plot details in my rant on this so I’ll digress, but her backstory and entire reason for existence just gets dumber and dumber as the movie tries to salvage some of its thematic pull through idiotic plot twists. 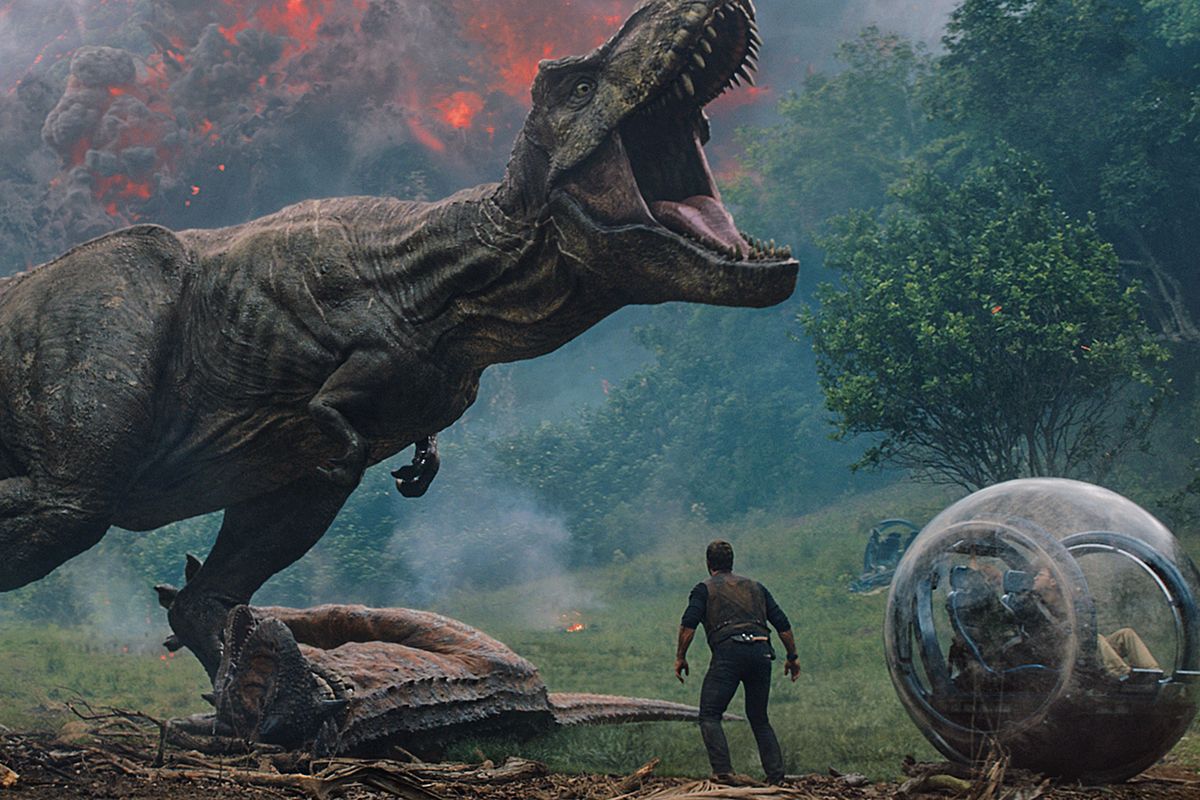 Speaking of idiotic, what the hell happened to Claire Dearing? Her character is almost completely changed from the original film. I know she learned a life lesson in that one, but she went from badass sprinting in heels to nothing more than a screaming, shouting, McGuffin that gets Pratt’s character to go places. It’s a really weird shift considering the film was written by the same guy and a loss of a character who could have been interesting. Even if they had used her well the movie completely wastes Blue, whose reappearance feels more like a toy contract obligation than anyone actually wanting him back.

Jurassic World: Fallen Kingdom is supposed to be a big dumb monster movie, but it doesn’t even pull that off. It feels so redundant of Jurassic World and so reliant on the tropes of the series that nothing is ever interesting. Despite its repeated and desperate reminders that it thinks dinosaurs are so cool, it doesn’t treat them that way. Somehow it takes all the childhood wonder that Jurassic Park encapsulated so perfectly and forgets it, leaving behind the fossilizing bones of a behemoth that once ruled many years ago.