0
Beyond the edge of greatness

Finales are hard. Some finales are able to meet the heavy burden of fan expectation like Breaking Bad’s sensational finale that still gives me chills to this day, delivering exactly what fans wanted while crafting an ending that feels justified and deserved. Then you have finales like Game of Thrones that almost feels insulting to sit through after getting to know and love those characters over nearly a decade. There isn’t an exact science on what makes a finale great versus a poor one. It really comes down to how satisfied you were personally and how badly you wanted the leftover plot lines and character beats explored.

While only being around for a year and a half, it has been an absolute pleasure covering She-Ra and the Princesses of Power. It’s a show that I probably wouldn’t have discovered if it wasn’t for me covering it at my first New York Comic Con as a member of the press and has had its ups as well as its downs. Throughout it all, I can safely say that I’ve had a great time in the lead up to the Season 5 premiere and while I’m sad to see the show end, I’m glad that showrunner Noelle Stevenson was able to end the show exactly the way she wanted it.

But a show ending how the creator intended it to is different from it ending in a satisfying manner. Was She-Ra’s final season a good conclusion to the show or did it spiral out of control? As is always the case with She-Ra, don’t worry. We’re in good hands.

Following the defeat of Hordak (Keston John), Adora (Aimee Carrero) losing her She-Ra powers, and Etheria being ripped out of its pocket dimension, everything seems virtually hopeless for our heroes. Hordak’s superior, a deity of a tyrant named Horde-Prime (also played by Keston John), is planning to completely absorb the planet into his galactic empire in the name of peace, and by peace he means to activte a planetary super-weapon and destroy Etheria. Unlike Hordak and his plans of conquest, Horde-Prime can actually back up what he says to a frightening degree and defeats our heroes time and time again, pushing the Rebellion into a corner. Without She-Ra, is there even a chance for our heroes to save the day?

Given the dramatic heights of last season, it’s relieving to see that Season 5 opted not to solve all of the problems left by that finale. Friendships are still in shambles and it takes several episodes for our heroes to rebuild what they themselves broke. But on the whole, Season 5 isn’t interested in dwelling on the past. These are 13 episodes dedicated to forward momentum and advancing the plot at all costs. It could have been so easy to cram a bunch of development and revelations into a small time frame and feel overstuffed in the process, but it never once feels that way. The stakes are constantly escalating while every character gets some time to shine… for the most part.

If I had one overarching criticism about the fifth and final season, it would be that a large amount of the supporting cast feels sidelined for most of the adventure. Some characters get micro arcs that last for an episode, like Mermista (Vella Lovell) trying to act like a better leader or Hordak trying to regain his lost personality thanks to Horde-Prime’s reconditioning, but most other characters either feel underutilized or not used at all. Frosta (Merit Leighton) has a strange arc in an episode about not wanting to be treated like a child while a handful of characters from previous seasons like Huntara (Geena Davis), Double Trouble (Jacob Tobia), and Madame Razz (Grey Griffin) function as glorified cameos. 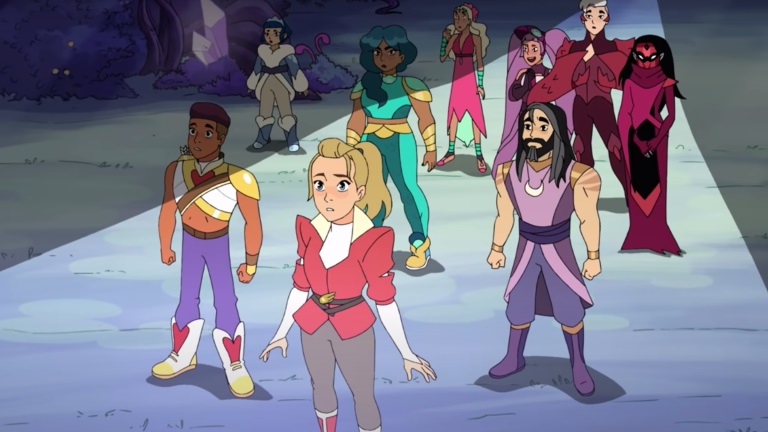 The reduction of supporting cast members can work, especially in a story with tons of small moving parts as She-Ra does, but only if there’s a suitable narrative replacement. We may not spend a lot of time with the supporting cast this season, but instead our time is spent focusing on the core relationship of the show, that of Adora and Catra’s (AJ Michalka) broken friendship. These two have been the foundation of the show since episode one and Season 5 goes all in on exploring their friendship, rivalry, and the remorse that both sides feel for one another. The show goes above and beyond at fleshing out the two of them, but special praise needs, nay deserves, to be given to Catra. People like to talk about Zuko from Avatar: The Last Airbender as being one of the most complex characters in animated history, but I would argue that Catra outshines him in nearly all regards.

Without going into spoilers, Catra has gone from being a hurt friend, to a bitter rival, to a vicious commander, to a Final Fantasy villain bent on wiping out EVERYTHING, before being brought down hard thanks to the events of Season 4’s finale and Horde-Prime. At the start of the season she’s confident at her ability to be able to insert herself into Horde-Prime’s intergalactic empire, only for Prime to ruin those dreams with only the slightest of effort. Prime isn’t a rage fueled scientist like Hordak was. He’s calm, composed, and acts above petty issues like emotion and deception because he legitimately is above it all. The man paints himself as God and it’s not hard to disagree with him when he casually breaks Catra’s will and hurts her in a way she had never been hurt before, traumatizing the poor girl in a way Adora, Hordak, or Shadow Weaver (Lorraine Toussaint) never could.

Because the relationship between Adora and Catra makes up the bulk of the fifth season, it’s hard to go into any depth about it other than saying that the climax of their relationship in the two-part finale had me openly applauding how well handled it was. It didn’t feel forced and it certainly didn’t come out of nowhere, but the ultimate resolution between these two frenemies was absolutely perfect and I’m sure all the Catra fans out there, myself included, will be pleased as punch. 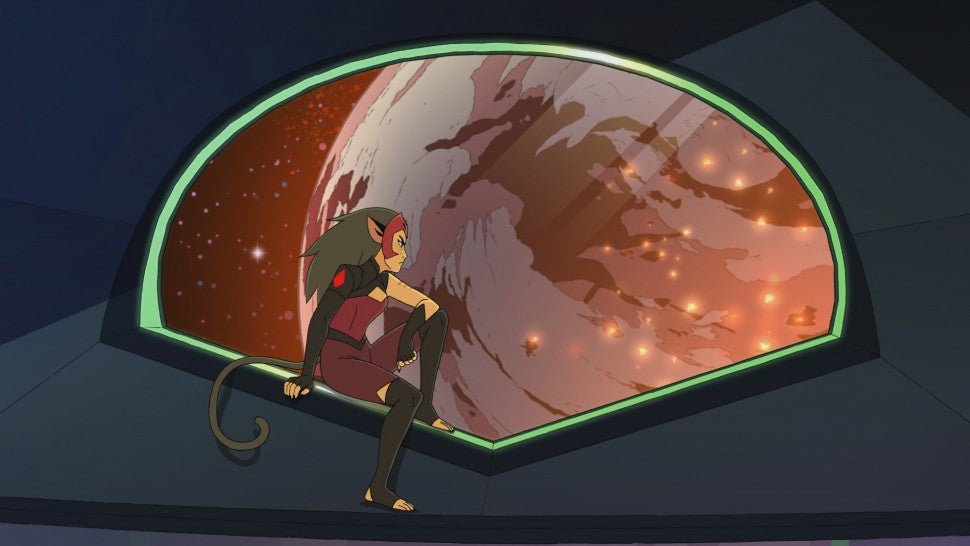 In fact, barring a few previously mentioned missteps, Season 5 is a near-perfect finale to an excellent series. No, that’s not a hyperbole. She-Ra and the Princesses of Power’s final season was by far one of the most well constructed endings to a show that had me hooked until the very end. The general mood behind the final season was one of desperation as allies began to fall left and right to Horde-Prime. How well constructed is it? Throughout the fifth season, subtle changes are made to the intro indicating the radical shifts within the Princess Alliance, whether it be from who is currently involved with the Rebellion or character’s facial expressions to indicate their mental state of mind. It’s little touches like that which really indicate how much the production crew really cared about this show.

Even with the world at its bleakest, She-Ra still never lost its sense of charm and humor and delivered them in some quaint and fun ways. One of my favorite new characters introduced this season was one of Prime’s clones who was cut off from Prime’s hivemind neural network. He becomes a member of the Rebellion after this all while having an existential crisis to boot and slowly learning how people behave. He’s also a surprisingly good cook! Characters will still crack jokes and have goofy moments, but it never detracts from the severity of the situation. Sure, some episodes may have overindulged in this, most notably the weakest episode the season, “Perils of Peekablue,” but one average episode doesn’t negate the sheer level of quality present in the rest of the season, with the final string of episodes defying all expectation and outdoing the previous episode.

One thing that She-Ra has always excelled at is representation for the LGBT community. From the show’s inception, with Noelle Stevenson describing a rainbow in the season one finale as being a literal representation of “the gay agenda,” She-Ra has been a prominent advocate for LGBT representation in animation. From gay couples to non-binary characters, that streak of respectful representation continues here. While there are plenty of messages that could be gleamed from the series finale, the one that I took away from it was that love is universal. Love is something that can be achieved by anyone and isn’t limited by a narrow definition. Steven Universe may have offered a more subtle take on that same idea, but there’s something admirable about She-Ra being so blunt with it, unafraid to hide it behind subtext and in-between-the-line readings. This is some goddamn historic representation right here ladies and gents, way beyond what was attempted with The Legend of Korra and Steven Universe. 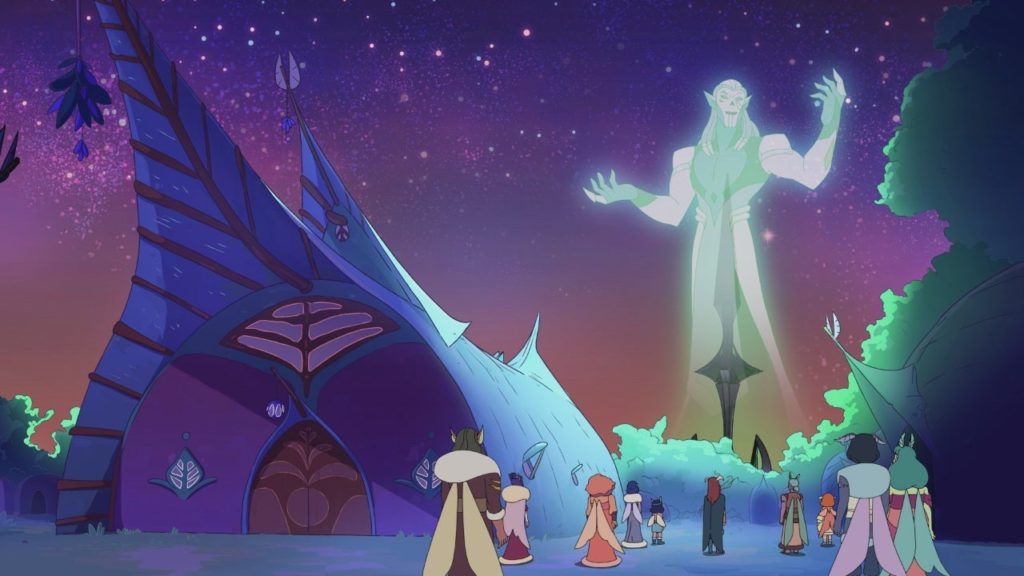 Most of my criticisms are nitpicks. Sure, I may have wanted more time with the supporting characters, but their reduction made sense with the focus clearly on the interplanetary conflict and Adora and Catra’s complicated relationship being explored. One episode may have been lukewarm, but 12 episodes were outstanding. Maybe there could have been less time with the cast separated from each other, as was the case for a string of episodes in the middle, but it served to highlight the vast new world that laid bare before the characters. This is why finales are so hard to perfect. There could always be something to improve upon, but what’s here is still so absolutely wonderful that I’m at a loss on how Stevenson could have made it better.

If you haven’t seen She-Ra and the Princesses of Power yet, you have no excuse. I’ve had to try and separate my objective and subjective opinion here, but there’s no denying that they’re both in agreement. The formal side of me is telling you that She-Ra and the Princesses of Power ended everything on such a great note to the point where fans will have nothing to critique about. There are enough crowd pleasing moments that end in emotionally rich moments that it’s unreal. Even without that, the characters are so well developed that even characters I can’t stand like Sea Hawk (Jordan Fischer) got conclusions that put a smile on my face. If this isn’t a masterpiece, it’s damn near close to it. As for the informal side of me, watch this show. You have no excuse. I don’t care if Avatar: The Last Airbender dropped on Netflix the same day as this season. Watch She-Ra and the Princesses of Power. Do it. You will not be disappointed. 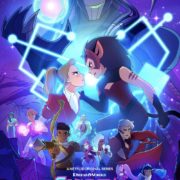 This show has literally changed what we should think television is capable of. You won’t feel the same after watching it.
9.5

If you haven't seen She-Ra and the Princesses of Power yet, you have no excuse. If this isn't a masterpiece, it's damned near close to it.