Antoine de Saint-Exupery’s The Little Prince is one of the most famous children’s books of all time. Translated into over 200 languages, it’s become a treasure worldwide. But as with all adaptations, things were bound to change in order to stay relevant in our current animated renaissance.

After learning of a troubled development, as Paramount canceled the domestic release before it eventually found its home on Netflix, I was cautious going into The Little Prince. Although the novella has aged well, there were most likely going to be some growing pains. Unfortunately, those growing pains eventually take their toll.

Mark Osborne’s (Kung Fu Panda 3) The Little Prince isn’t a direct adaptation of its source material. Much like other children’s book adaptations such as Where the Wild Things Are and Cloudy With a Chance of Meatballs, Prince creates its own original tale. But it takes an interesting angle as the original story serves as more of a delivery system for the original text. As Little Girl (Mackenzie Foy) deals with an overbearing, but well meaning. mother (Rachel McAdams), she meets The Aviator (Jeff Bridges, who also serves as weathered narrator from the book) who tells her about the time he met a Little Prince (Riley Osborne) who traveled across the stars. Essentially, it’s a story within a story. Seeing as how difficult it might’ve been to translate the obtuse themes from Saint-Exupery’s writing, this is probably the best possible solution.

But the main problem with taking this approach is when Prince isn’t telling the book’s story directly, it falls short. The film has a conventional style with character design resembling most animated films. The thin, angular bodies of Dreamworks, the larger heads of Pixar, all mash together into something resembling Hoodwinked! with a more flexible budget. That’s not to say it’s not done well, it’s just utterly generic when juxtaposed with the incredible stop motion paper sequences directly adapting the book. These sequences are so endearing and artful, it begs the question of why we couldn’t get an entire film that way. The score during these sequences is fantastic with a light jazz/French ensemble paying tribute to the book’s origin and tone, the packed cast delivers humble, weighted dialogue, giving more weight to themes overall, and no matter how much you see paper style, it remains surprising. But the other 2/3 of the film feels like filler. Rather than emphasize the stop motion sequences, making each one a reward, it’s like they’re being held at bay.

While adapting the text as a “story within a story” seems like a good solution, Prince unfortunately waters down the thematic resonance Saint-Exupery’s text is remembered for. I won’t go into too much detail about what exactly it does, but suffice to say when a now adult Prince has to remember his youth, Prince loses all of the beautiful subtlety. The original novella was a fable about holding on to youth and the hope that comes from imagination, but it never explicitly said any of these things. There were slight hints about the troubles of adulthood, but it was left up to the reader to find it. The film crosses over into “preaching” territory as metatext gives way to explicit statements. It’s a little too direct for comfort and becomes yet another animated film trying to teach a lesson.

The problem is wondering what could’ve worked better. Would the film have worked if director Osborne had gone with one style over the other? Would it have succeeded with the original book’s vignette narrative? But how would that film work among current animation film needs? It’s the best case scenario in a tremulous situation. Rather than encapsulate the spirit of the original text, making it viable for children and adults alike, it’s more of a tribute to those who enjoyed the book as a child. In some cases, it’s better to please as many people as you can.

The Little Prince distances itself from its source material more than it desired. Treating the original novella with an almost untouchable reverence, it never gives the audience time to enjoy the story and dive into it themselves. Instead Prince tells us how we should feel about it, thereby ignoring what made the original book so memorable. Essentially mirroring the actions of adults we’re told to avoid.

In trying to pay tribute to Antoine de Saint-Exupery’s The Little Prince, the film mistakes an elephant in a boa constrictor for a simple hat. At least it’s a nice hat. 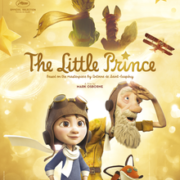 Yes, this could have been better, but it is still worth your time.
6.5

In trying to pay tribute to Antoine de Saint-Exupery's The Little Prince, the film mistakes an elephant in a boa constrictor for a simple hat. At least it's a nice hat.

Review: The Trial of the Chicago 7