0
As above, so below

With the world currently dealing with a pandemic on a scale that hasn’t been seen in over 100 years, it’s not really surprising that a film like The Platform became massively popular. This is a movie that directly deals with class struggles and a society in breakdown. You see people treating each other like garbage and hoarding food all because of a system that…uh…well, I can’t really explain what the system does.

For as unflinching as The Platform may be, it leaves a lot of room for interpretation with its setting. This is certainly a thought-provoking and well-shot film, but the lack of details about this world and its people threatens to undo the meticulous pacing and atmosphere the movie builds.

Thankfully, there’s enough good here to save the film, even if it fails to fully capitalize on its premise.

The opening to The Platform is as confusing to viewers as it likely is to its main character. A man wakes up in some kind of cell and is unsure of how he got there. Sitting across from him is an older man in what appears to be prison garb. In the middle of the room is a hole on both the floor and ceiling and the number 48 is etched into the wall. As our main character begins to walk towards this hole, the old man speaks up.

We soon learn that the old man is named Trimagasi (Zorion Eguileor) and our protagonist is Goreng (Iván Massagué). Trimagasi explains how they are contained in a prison-like facility where a platform is occasionally lowered from the middle of the room with food on it. As the number 48 implies, they are on the 48th floor of the building and are eating the table scraps left by 47 previous floors. If you couldn’t gather from that description, obviously the people above aren’t rationing out food.

The whole premise for The Platform could be best described as a thought experiment. Similar to scientific arguments like “The Chinese Room” or “Newton’s Canon,” it seems some unnamed administration is attempting to research how society will band together when put in a dire situation. Again, it should be obvious this doesn’t happen. 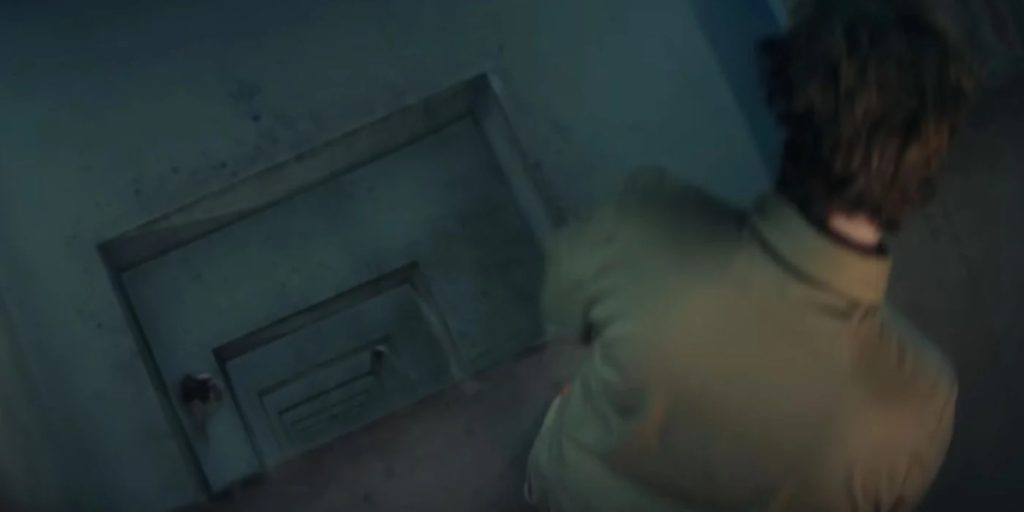 As is the case with most dystopian films, the real threat isn’t some chemical agent or horrible weapon, but humanity. There are always going to be good apples, but most people are inherently selfish. As Goreng quickly learns, cellmates are given a random floor each month and that can either go up or down. Trimagasi notes how he was on a floor in the hundreds one time and still didn’t see a bottom. It stands to reason that there are even more.

So the film slides into a rhythm of watching these men discuss their situation, somewhat bonding a little, and opening up about their backgrounds. Goreng volunteered for a six-month stint in exchange for an accredited diploma. Trimagasi inadvertently killed a man after he threw his TV out the window in a rage and chose to come into the facility in lieu of prison. It seems like everything is going well until they wake up after a month on a much lower level.

I could continue detailing the events here, but the idea is clear: The Platform is an allegory for classism. Trimagasi basically spells out the theme of the film in its opening moments. “We don’t talk to them because they are below us. Those above us won’t talk because they are above.” I’m not sure how much clearer it can get. 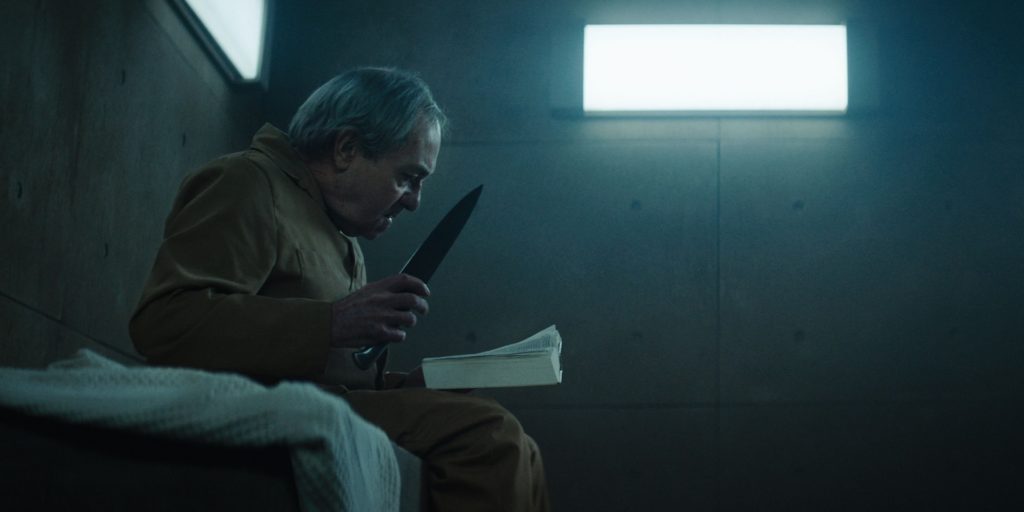 The Platform doesn’t hold itself to any higher standard, which allows it to make good use of its minimalist setting. Cribbing style from grindhouse pictures, this is an exceptionally violent film at times. Trimagasi explains how he ate his cellmate and even starts to repeat the process on Goreng. We meet a silent Asian woman who then comes to Goreng’s rescue. Goreng brutally murders and eats Trimagasi. It’s a little much, but it fits into what this movie is trying to show.

As I said in the opening, it’s not hard to understand why people are currently drawn to the film. The ongoing coronavirus pandemic has people acting crazy and hoarding supplies like the end is coming. You can see exactly that phenomenon in The Platform with the upper levels. If everyone just rationed their food out and ate what was necessary, the entirety of this facility would be able to feed. You’d think after having decades of films with a similar message, people would wise up and help each other.

That’s just the human condition, I suppose. The Platform is basically a mirror to modern politics. Read any online discussion from the right-wing and you’ll see a “fuck you, got mine” mentality in full swing. Read the left and you’ll find overly righteous people acting like they are God’s gift to the world. There seems to be no middle ground and we’re not even in a horrible situation like Goreng. 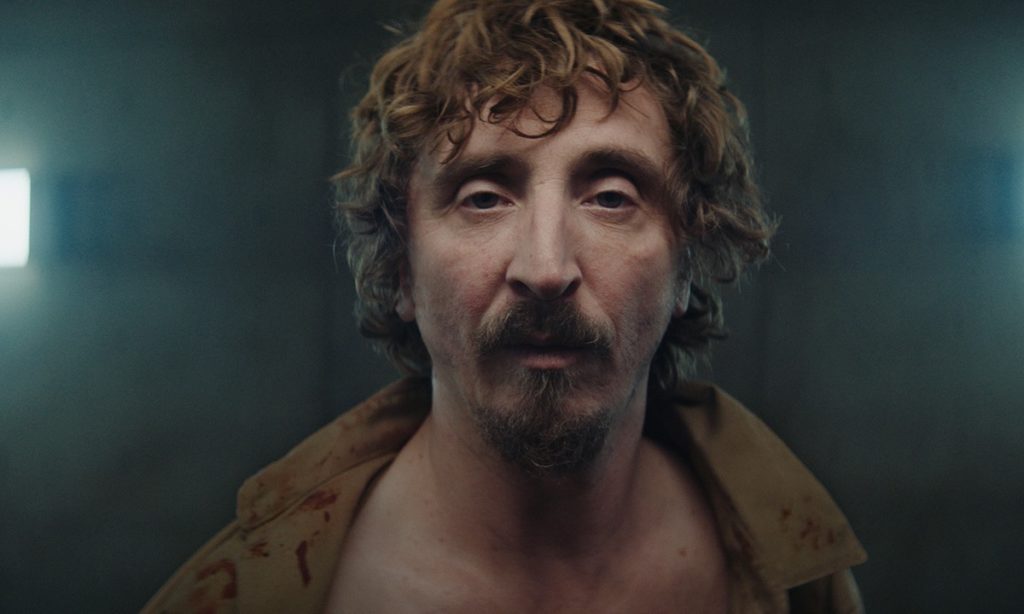 Where the film stumbles is with the background details. We don’t necessarily need to see the administration — as they are referred to — but the film gives us a fleeting look at chefs preparing food and the terrible conditions they are subjected to. Someone is pulling the strings, but we don’t exactly know why. We also only have a base level understanding of what Goreng entered for. Is he from a low-income family? Is there something about racism that is preventing him from getting a diploma?

The main focus of the film is on the struggle of the inmates, but the film could become even greater if it just let us understand this world some more. Show us how Goreng either regrets his choice or is fighting through these dire straits to achieve something he couldn’t normally. Let us see how the administration is corrupt to the core and ignoring these people for their own benefit. Explain to us how such a facility came to be and why the government hasn’t stopped its operation.

There has to be more to this world than The Platform is showing us. I understand the vague nature is to fully put us in the shoes of Goreng, but there are far more questions than answers with this movie. Even the ending concludes on a question, letting the viewers decide if Goreng’s ultimate choice works or not. It’s great that the film doesn’t treat its viewers like idiots, but just something more would go a long way to getting you invested. 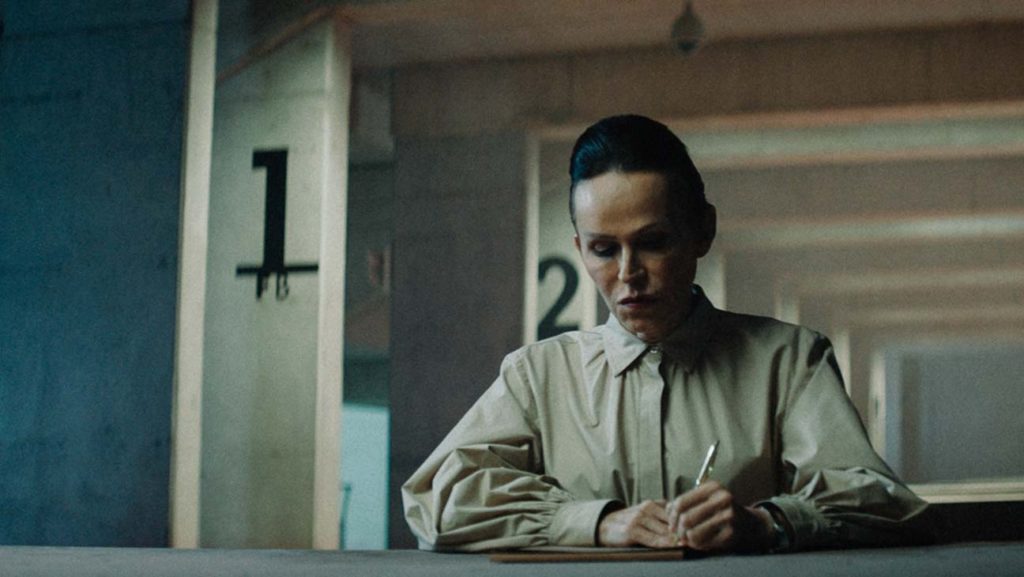 Even with those faults, I can’t help but be intrigued by The Platform. The direction is solid, the cinematography makes excellent use of its limited scope, and the acting is good. The sometimes ambient score also accentuates tense moments and ramps up the intensity when it needs to. The final 15 minutes, in particular, feel like an action film from the camera angles, brutal violence, and exciting sound design.

There are a lot of things going on here and even if The Platform isn’t a modern classic, it’s still an interesting film that’s well worth a watch. Hopefully, this movie can show people that extending a helping hand in trying times will get us through even the worst of situations. 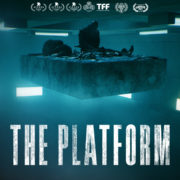 I liked this one, and you will too
7

There are a lot of things going on here and even if The Platform isn't a modern classic, it's still an interesting film that's well worth a watch.