0
Maybe it's time for retirement.

For years in the Chinese film industry, filmmakers have been doing their damnedest to replicate and ape Hollywood cinema. Instead of focusing on creating films that are culturally specific to Chinese citizens or working within the confines of more limited budgets, moviegoers in Asia have been treated to knock-offs, rebrandings, and straight-up copycat films that want so desperately to be American productions.

All of that describes Vanguard to a tee. Likely notable only because Jackie Chan is among the cast, I couldn’t tell you a thing that really happens in this nearly two-hour-long film despite rewatching a few scenes to make sure I understood the dialogue properly. I wouldn’t call this Chan’s worst film, but it’s easily the worst thing I’ve seen in 2020.

I’m getting ahead of myself, though. Let’s wind things back a bit and dissect what makes Vanguard such a weird misfire of action cinema in an era where we’re inundated with excellent films on a monthly basis.

Vanguard begins in media res in London where a celebration for Chinese New Year is happening. A terrorist organization known as Arctic Wolves is tailing a prominent accountant named Qin Guoli (Jackson Lou) and apprehends him off the street during the fuss of the crowd. Protected by Chinese security agency Vanguard, two members from the team leave their own New Year’s celebration to intercept and save Qin. To its credit, Vanguard wastes absolutely no time getting into the action with roughly two minutes passing before the first punch is thrown.

After a rather well-executed series of shoot outs and MMA brawls, the film slows down considerably and starts a rather long-winded exposition dump that sets up the rest of the film. Qin’s daughter, Fareeda (Ruohan Xu) is an activist in Africa and since Qin knows the location of money stolen from an Israeli terrorist leader, Arctic Wolves now sets their sights on his daughter. Vanguard’s boss, Tang Huating (Jackie Chan) assembles his team and sets off to Africa to save her.

If I keep going, this description will not only be seventeen paragraphs long, but it will just be a bunch of nonsense that’s completely inconsequential. The plots of martial arts films have progressed over the years to not only be more philosophical but contain excellent dissections of what makes their heroes tick. Vanguard doesn’t want to have any of that. This is a film primarily about the action, though it also loves to stop that action to exposit garbage at you that is not only written in an incomprehensible manner but delivered with some very hokey acting. 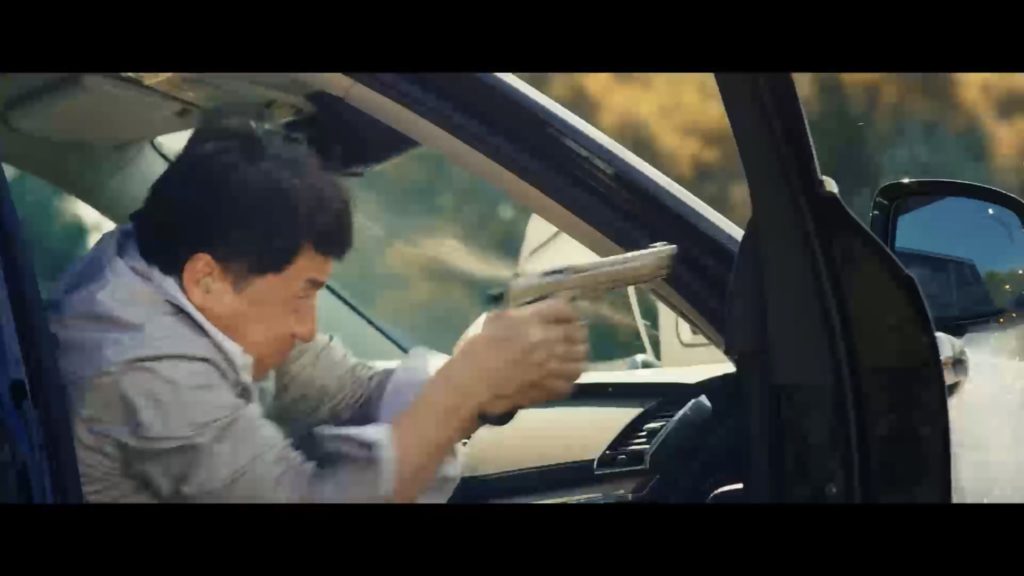 I really can’t stress that point enough. Using a mixture of Cantonese and English, Vanguard is obviously trying to appeal to multiple audiences at once, but there’s no real reason for it. The actors are perfectly fine when speaking their native language, but have no inflection or presence when speaking English. Even the British actors that make up some of the terrorists sound like they are speaking English for the first time that day. I don’t want to sound mean or criticize someone for being a non-native speaker, but I have to question why these actors weren’t either dubbed or allowed to speak their own tongues.

Setting that aside, the action also slowly devolves from being sometimes decent to just outright stupid. Utilizing a mixture of very low budget CGI effects and some poorly staged miniatures, Vanguard never quite nails anything that isn’t a traditional martial arts brawl. When the guns start firing, it feels like the worst of a Michael Bay film. There are explosions everywhere, lame blood effects, tons of shaky cam, and a sense of absurdity that is played way too straight.

Then there’s Chan’s presence, which amounts to little. Known for his comedic chops and expressive face, Chan isn’t even really the main character here. That honor belongs to Yang Yang as Lei Zhenyu, first in command at Vanguard. At times, the film wants him to emulate classic Chan, but then everything past the opening and final scenes drops any humor and simply goes for that gruff, macho Hollywood nonsense. 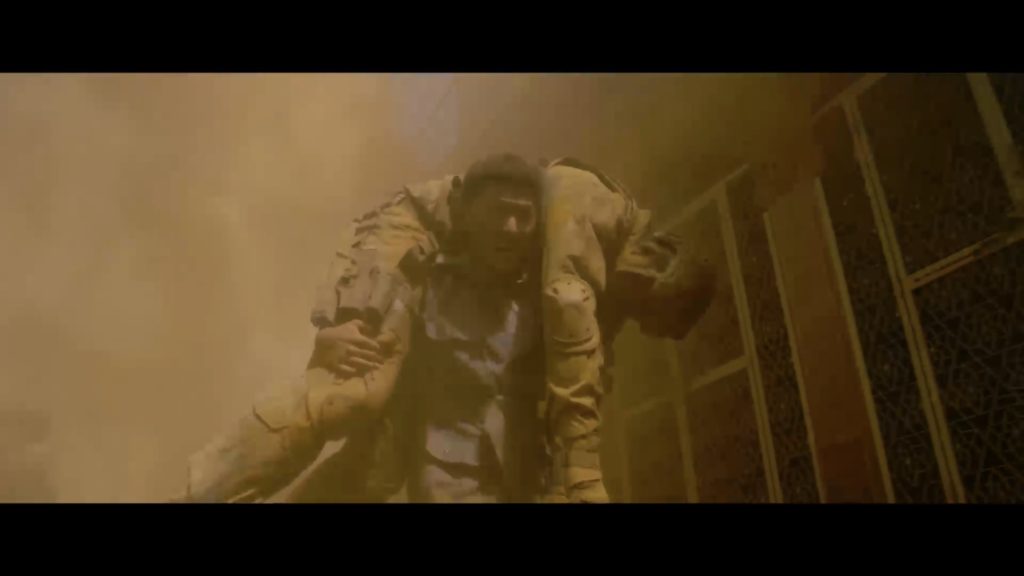 I can’t believe I’m using jingoism when speaking about a Chinese production, but that’s a lot of the vibe I get from this. In a clear bid to mimic films like Mission Impossible, American Sniper, or any other military film you can think of, the central message of Vanguard is that the team “leaves no man left behind.” While noble and something I can’t argue with, it doesn’t fit into this film at all.

What I mean is, these characters have so little in the way of distinction that I can’t even remember half of their names. For god’s sake, both IMDB and Wikipedia don’t even mention Qin and his plight with stolen money and his daughter’s abduction are the central focus of the film. He is the most important person in this story and he isn’t even listed among the main cast.

A lot of this could be forgiven if the pacing was better, but Vanguard doesn’t even nail that. The team barely saves Qin in the beginning, but then fails at its mission to save Fareeda and even loses Zhenyu. So a second mission gets mounted and Fareeda is retrieved, but then Qin gets captured. It’s a series of contrivances to get from one action scene to the next and it’s just tiring by the halfway mark. Interspersed between all of these moments are more expositional scenes and I’m honestly getting frustrated recapping all of this. 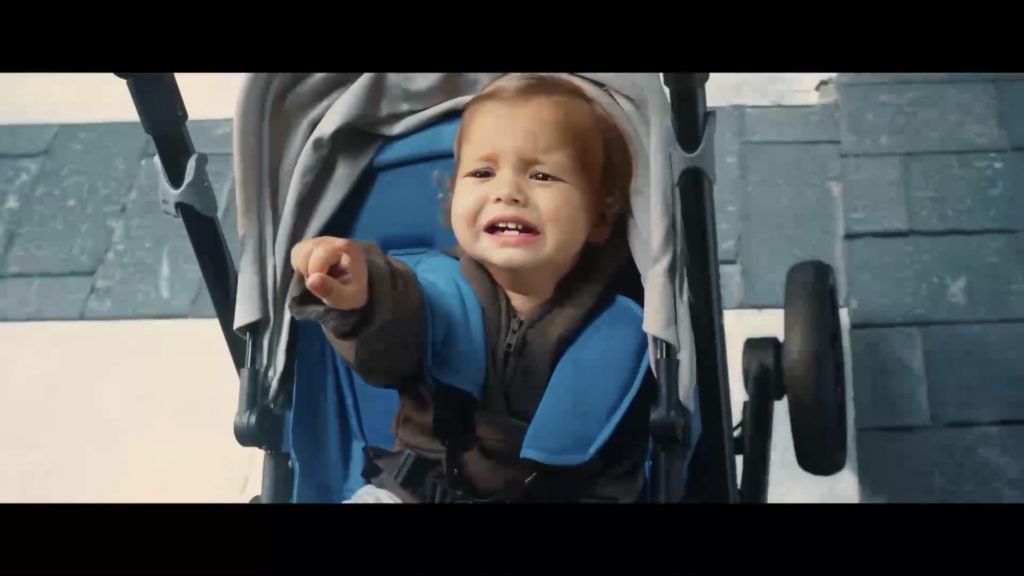 What really topped it off for me was during the final car chase sequence. I haven’t properly complained about how out of place the miniatures look, but their ability to speed from 0 to 1,000 in a split second is just mindboggling. Anyway, Vanguard is hot on the tail of Arctic Wolves and the cars are speeding towards a traffic jam. One of the civilians looks back in anguish as this massive hummer is plowing towards him and he braces for the worst. The hummer connects, sends his car flying through the air in slow motion, and a baby in a stroller on the street points and cries while the man looks down in astonishment.

If that wasn’t enough to put you off, the scene then introduces a flying Segway that one of Vanguard’s agent’s pilots to shoot at the terrorists. I just don’t know what else to really say. I tried my hardest to find anything in Vanguard that I could enjoy and it honestly pains me to keep writing.

Behind all of this madness are a cast and crew that seems like they were genuinely into what they were doing. As is typical with all of Chan’s films, Vanguard ends with a blooper reel and you see not only Chan failing at some of his stunts (one of which where he almost drowned) but also a sense of comradery between the actors. Chan hands out bottles of water and the different actors laugh about messing up a take. There’s even some kung fu instruction that helps the younger cast get up to speed. It seems like this film wasn’t plagued with issues, apart from being delayed for nearly an entire year after the coronavirus pandemic hit. 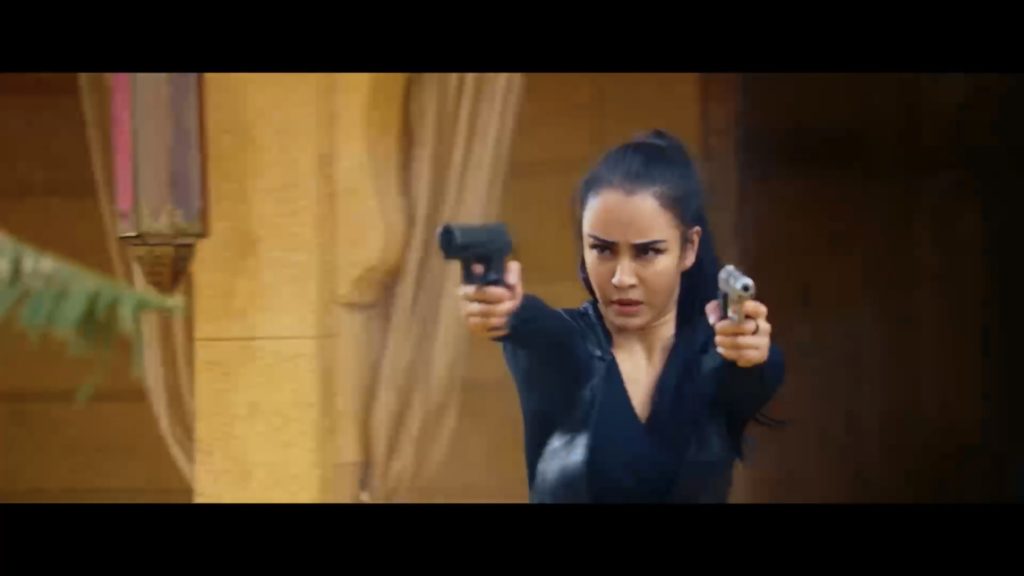 A lot of these problems are also puzzling considering the early pedigree of director Stanley Tong. His most famous film is Supercop, a movie that is not only considered one of Chan’s best but propelled actress Michelle Yeoh to international fame. Tong was even instrumental in kickstarting Chan’s Hollywood career with Rumble in the Bronx. Tong clearly knows how to make a movie, but then he also directed The Myth in 2005. That one often tops the list of Chan’s worst films of all time.

I don’t think Vanguard is going to go down in history as this abysmal failure with no redeeming qualities. It’s stupid on a level I didn’t expect, but there are certain people that might like that (CGI lions and all.) What I foresee happening is that Tong might end up retiring and Chan will probably fall into more of a support role on any future projects. It’s kind of a sad closer for both of their careers, but then the duo redefined Chinese cinema for an entire generation in the ’90s. I think they’ve earned the chance to make pure schlock. Do. Not. See. This. You will immediately regret doing so and can barely derive any enjoyment from it.
2.5

While not the worst thing Chan has ever been involved with, Vanguard marks a low point for Chinese action cinema and is something only the most forgiving of viewers could enjoy.