Is there any movie that Nic Cage can’t shine in? When the trailer for Willy’s Wonderland dropped a month ago, all I could think about was Nic Cage. To see the man star in a blatant Five Nights at Freddy’s rip-off while that film gestates in development hell, with copious amounts of violence and gore seemed too good to be true. I’ve been burned by Nic Cage trailers that led to pretty mediocre end results before though, so I was cautious. I’ve been burned before by the man. But there was just something about the gleeful stupidity of Willy’s Wonderland that gave hope to the film.

Willy’s Wonderland doesn’t care if you know that it’s a cheap horror knock-off of FNAF. Frankly, it doesn’t care. Instead of trying to terrify audiences, it wants to thrill them with Nic Cage screaming and ripping off animatronic robot skulls. Sometimes it’s the simple pleasures in life that get you by. No frills, no subtext, just joyous over-the-top action.

After his sick-as-hell car breaks down in the middle of nowhere, a nameless badass (Nic Cage) is stranded in town until his car can be repaired. Because everyone in the town is shady as hell and gives him absolutely no option to pay for his car at the moment, he’s told that if he cleans up the abandoned Willy’s Wonderland in one night, the owner of the place will pay for his car repairs. The place shut down decades ago due to a series of child murders, with the building being condemned shortly after. As Cage starts to clean, the eight animatronics at the Wonderland slowly come to life and attempt to kill him. Unfortunately for them, Nic Cage isn’t one who can be killed by a stuffed weasel and proceeds to fight back

As is always the case when preparing for a Nic Cage movie, what exactly can you expect from him here? It goes without saying that any Nic Cage performance will be a memorable one and his time as the nameless janitor is intense. Cage never says a word and will instead stare at you with pure intensity. There’s just pure hate in his eyes at all times that I couldn’t help but laugh at it. He will stare at a sign the same way he’ll stare at a murderous robot with a sword. One would think that Cage was actually the robot here, doing his best Terminator impression, but no. Nic Cage only has two settings in the film; stoic indifference and bloody curdling rage.

He’s a simple man with simple tastes, abiding by a strict schedule to an absurd degree. While Cage starts off in the attraction alone, eventually, a group of teenagers joins him because they want to burn the place down. Cage’s response is to just keep cleaning, taking breaks, and playing pinball. Even when an animatronic is about to brutally snap someone’s neck, he just gives them a switchblade and takes his break. You can’t help but love the absurdity of it all. Even the animatronic doesn’t really know how to respond to Cage. I mean I get it, sometimes you need to take a break while you work to stay sane. I just didn’t think the breaks would be right after you see a chameleon snap a kid’s neck. Different strokes for different folks. 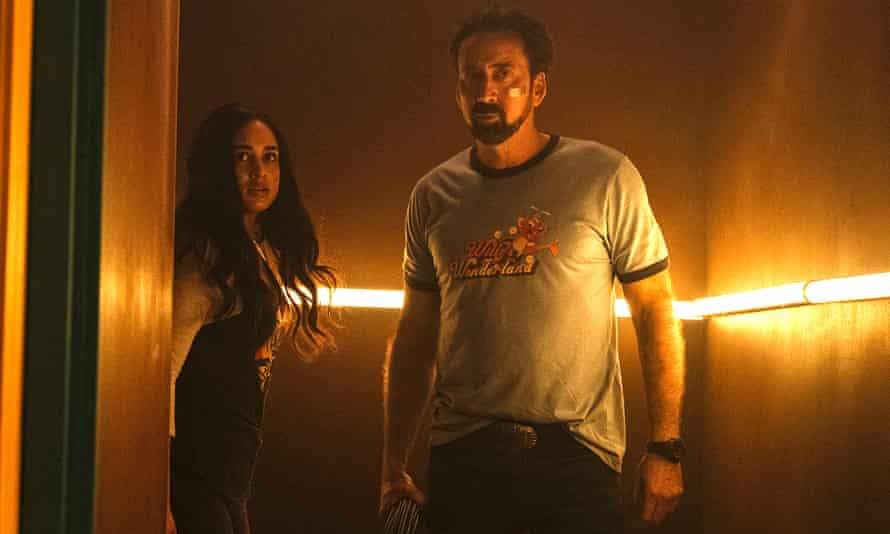 But yeah, the group of teenagers. Since this is still a horror movie and it needs a body count, we have six teenagers that enter Willy’s Wonderland and almost all of them meet a brutal end. We learn through one of the girls, Liv (Emily Tosta) of the dark history of the Wonderland and the town in a brutally long exposition dump. Of course, there’s a secret cult, dark motivations, and serial killers at play, but it plays itself a bit too serious because of it. The absurdity of the situation overcomes any attempt to be serious and frightening. This is a movie where a policewoman is in hysterics and all but prostrates herself in front of a giant stuffed weasel. Buying the dark and twisted history of this rural town isn’t easy.

I mean, I suppose we do need some context for what’s going on here, but the film actively doesn’t care about its own lore. After the lengthy explanation given to Cage by Liv, we cut to him just cleaning a table. She asks if he was even listening to what she was saying, but Cage simply doesn’t care. It doesn’t matter why these giant animatronics are coming to life, he just wants to do his job. It’s hilarious how little Cage emotes about what’s happening around him, but it makes a weird atmosphere for the film. Willy’s Wonderland wants you to care about its lore, except it makes fun of itself for doing so. So should we care about the history of Willy’s Wonderland or not?

None of that matters once the action starts up in earnest. I couldn’t stop laughing when the first animatronic, a giant ostrich, just walks up to Cage and they have a staring match. How anyone could take something like that seriously is beyond me, but the end result is some grizzly action. We start out with spine removals and then move to decapitations, vivisections, skull-stomping, and of course, ball-crushing. Black oil flows from the animatronics and douses the entire attraction to the point where if it was actual blood no Windex Cage could use would ever get it all out.

I wouldn’t say that the film is lacking ambition, but Willy’s Wonderland knows exactly what it’s trying to be. It wants to have tons of blood and let Nic Cage go on a homicidal binge. It’s when the movie tries to add standard horror tropes to the mix that it begins to suffer. We don’t need a worthless bunch of teenagers in the Wonderland. We don’t need a detailed history of the dark secrets of the town. We don’t even need a real motivation behind the murderous animatronics. All we need is some violent shlock.

Willy’s Wonderland is violent shlock. Sometimes an audience wants to have deep and emotional experiences. Sometimes we want to think about the futility of mankind and our flawed human existence. Sometimes we want to see high-caliber awards seasons darlings. Other times I want to see Nic Cage split a giant stuffed crocodile’s jaws in half and rip out its throat. Today I’m looking for the latter, and Willy’s Wonderland left me with a huge smile on my face. 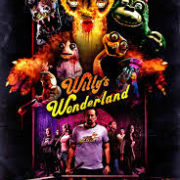 Despite falling into some basic horror tropes, when WIlly's Wonderland leaves Nic Cage to fight against killer animatronics, you'll be hard-pressed to find something as stupid or entertaining as this.