0
A wolf in sheep's clothing

Inspiration can be a tricky thing. If you take too much from pre-established materials, it would be easy to call your movie a rip-off or a film that lacks any original ideas. Nearly every film takes some inspiration from others, whether it be through technique or style, but then it becomes a game of seeing how blatant the inspirations are.

Case in point, it’s easy to trace back nearly every Quentin Tarantino film, whether it be through direct references of stylish homages, to the films that inspired them. The same can be said for Wolfwalkers, which if you’re at all familiar with seminal pieces of animation or the animation renaissance of the 90s, should be easy to identify. But just because Wolfwalkers takes a lot of its beats from other films doesn’t make it a bad film. It has its own certain charm and flair to it, but is it enough to overlook how basic the overall package is?

Robyn (Honor Kneafsey) is an apprentice hunter who has always wanted to go out with her father Bill (Sean Bean) to hunt wolves. It’s the reason that the two of them were sent to Kilkenny, Ireland. After encountering a wolf for the first time, Robyn learns of a certain type of human called a wolfwalker, a person who is a human while awake but their spirit becomes a wolf while they sleep. The people in Kilkenny are hesitant of the wolves and the wolfwalkers, but the Lord Protector (Simon McBurney) wants the forest destroyed to expanded Kilkenny’s farms. At first, Robyn wants to help her father kill the wolves but after encountering a wild wolfwalker girl name Mebh (Eva Whittaker), Robyn slowly starts to see how maybe, just maybe, the wolves aren’t the monsters the Lord Protector makes them out to be.

In essence, we have a story about man versus nature. The people of Kilkenny, lead by the Lord Protector (who apparently is meant to be real-life Oliver Cromwell but this was poorly explained in the film), want to advance into the woods and drive out the monsters they believe live there, while the wolves and the wolfwalkers just want to make sure their home is protected and that the magic and beauty of the forest is preserved. This is basically a Celtic infused Princess Mononoke, but instead of carrying the weight and complexity that movie presented where both sides are right and wrong, Wolfwalkers instead gives us the complexity of Disney’s Pocahontas.

While characters aren’t defined by a single trait as in most Disney films of the 90s, they’re instead characters who grow in all of the expected ways with little twists or turns in the overall narrative. Robyn at first wants to hunt wolves, but by getting to know them she slowly starts to think of them as sweet and kind and that hunting them is wrong. Mebh used to think that humans are all nasty and mean, but she develops a friendship with Robyn, whom she refers to as a “Townie.” It’s all simple, but effective in getting across a story that won’t redefine your world, but delivers enough satisfying moments to keep you engaged with what’s happening. 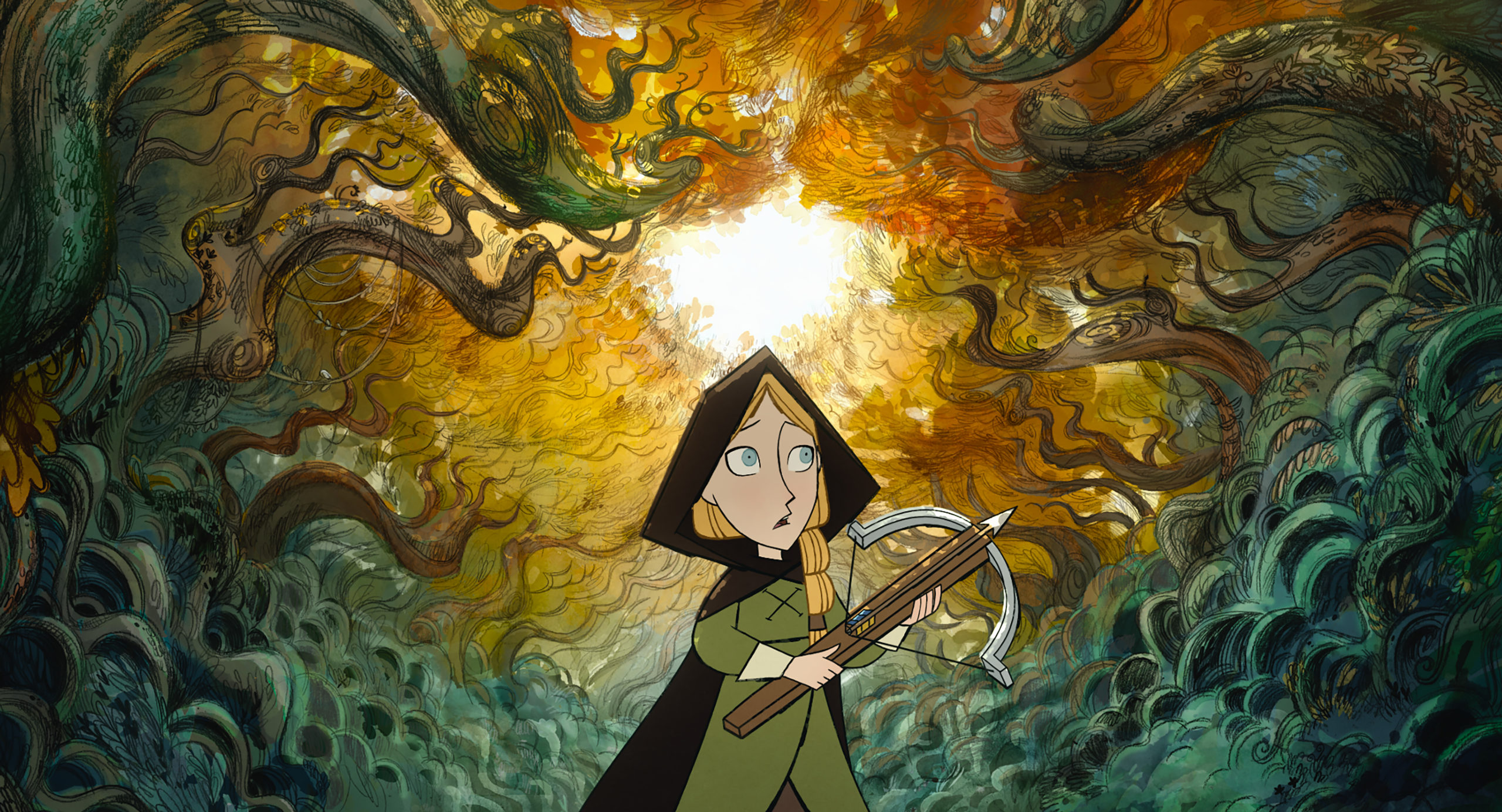 Even if the story wasn’t as perfectly serviceable as it is, the visuals alone could elevate this movie into being on the edge of your seat. I can’t think of the last time I saw a hand-drawn animated movie that looks THIS good, but man I’ve missed this. There are CG animated movies that can impress me, Coco in particular comes to mind, but there’s a certain kind of wonder that only hand-drawn animation can really provide.

The general aesthetics of the movie are clearly inspired by the Celts, which is perfectly understandable for the production studio, Cartoon Saloon. Their previous efforts, most notably The Secret of Kells and Song of the Sea, have a distinctly Irish air to them, but this is probably the most Irish animated film I’ve ever seen. It pays deep respect to the culture of Kilkenny, the mysticism of the time, and an overall aesthetic that’s just dripping with personality. There’s even some good ol’ fashioned English bashing, so you know it was made by Irishmen!

All joking aside, this Wolfwalkers is a wonder to actually see in motion. Every character looks like they’re a living, breathing sketch, best exemplified by the still lingering outlines on their body. The fluidity is a marvel and it only gets better in the more frenetic scenes where the animators can really just let loose. One sequence in the film, where Robyn and Mebh are running around the forest at night, set to the hauntingly wonderful “Running With the Wolves” is probably my favorite sequence out of any movie I’ve seen this year. 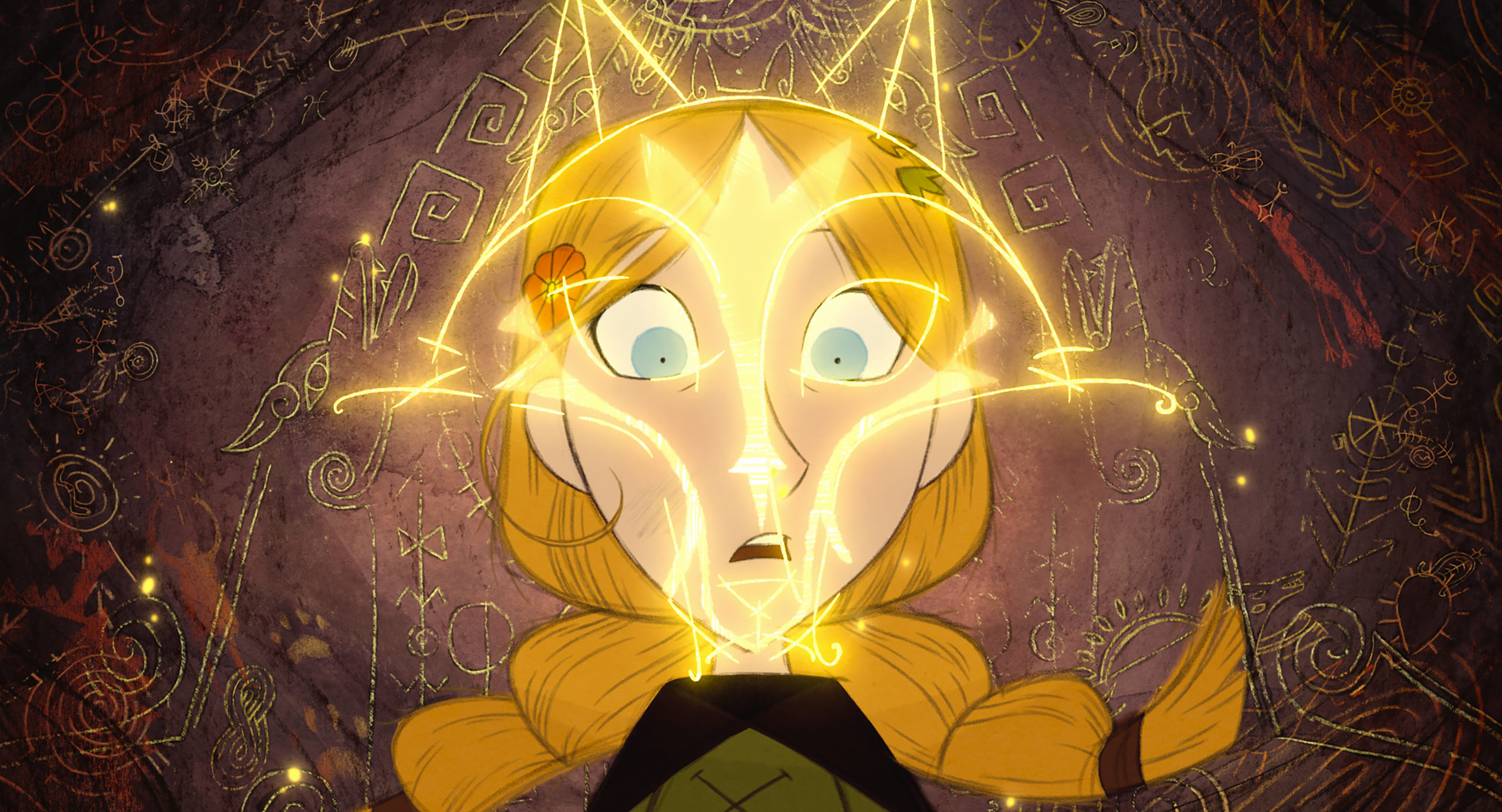 I’m genuinely torn when it comes to this movie because while it does boast several sequences that deserve to be analyzed in animation classes to come, all of it is in service to a plot that I can’t help ignore has been done better before. The directors have stated multiple times that the film takes direct influences from Studio Ghibli’s Princess Mononoke, but therein lies the problem. That’s a film that is, in pretty much every category, better than Wolfwalkers. I don’t think that’s too much of a controversial statement, saying that something is inferior to one of the greatest anime feature films ever made, but if you’re going to invite direct comparisons to a cinematic classic, be prepared for heavier evaluation.

Imitation may be the biggest form of flattery and I know it’s unfair to be making those comparisons and Wolfwalkers is its own unique beast, but the individual beats of Wolfwalkers aren’t quite as memorable or impactful as Mononoke. The Lord Protector is a standard, pompous villain, Mebh is your standard spunky wild child, and Robyn is arguably the only character who goes through a major arc by the story’s end.

But this is one of the rare times here at Flixist that, technically speaking, two writers are talking about the same film. Wolfwalkers actually debuted at the London Film Festival and that detestable Englishwoman we all love very dearly here, Sian, actually gave her thoughts on it. While it technically wasn’t in the format of a traditional review and we may both disagree on the overall nature of the plot, the visuals alone justify a watch and making that known is a top priority as far as I’m concerned. So consider this a double boost that you should see Wolfwalkers.

Visually, Wolfwalkers deserves to be seen for its lush imagery alone. As for its story, it’s hit-or-miss. You can conceivably watch this movie with the dialogue removed and still understand the general beats on the plot and that would arguably make for a more interesting and compelling film. Still, the visuals are enough to put the movie over the edge and safely lands in my column as being worth a watch. 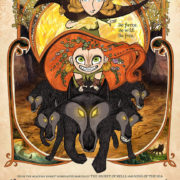 Visually, Wolfwalkers deserves to be seen for its lush imagery alone. As for its story, it's hit-or-miss.