0
Watch it on a loop

Russian Doll presents a tricky proposition for review. The series is loaded with themes, symbolism and constant mind games, but a lot of the enjoyment hinges on the mystery of it all. Even explaining simple details from the second or third episode could give away some pretty big moments, but I want to say more than just “GO WATCH THIS!”

Following the cliché established by Groundhog Day, Russian Doll takes the idea of getting trapped in a single night and uses that to explore the connections that we feel for other people. What starts off as a confusing and off-putting show about a woman living her life to excess begins to reveal itself as an in-depth look at how our actions directly affect the universe around us. One cannot live for themselves indefinitely.


Natasha Lyonne portrays main protagonist Nadia Vulvokov wonderfully. In a role that seems to be a culmination of not only her personal life but her cinematic one too, Nadia is in a constant state of insobriety from her mixture of hard liquor and drugs. The reason for her excess seems to be because of living the life of a New York-based hippy, but eventually gets shown to be something much deeper. Saying too much would rob the story of its build-up, which is thankfully not as prolonged as other Netflix series.

In a bold move, Russian Doll is only eight episodes of around 25 minutes each. Instead of going for the Netflix standard of a bloated, drawn-out season arc, the writers have condensed this weighty series into a slim package that is easily digestible. While episodes don’t have any real start and stop points, their short length is perfect for the modern phenomenon of “binge-watching.” It seems the showrunners knew this, as well, because Russian Doll can almost be viewed as a long film instead of a mini-series.

A format seems to be established from the very first moments, but each episode starts to play with the idea and change incidental details around to get the mind racing. The more keen viewers will notice something is awry from the first reset, but the show eventually starts to play into that uncertainty by having Nadia acknowledge her surroundings and hunker down to solve the mystery. Then the curveball happens. 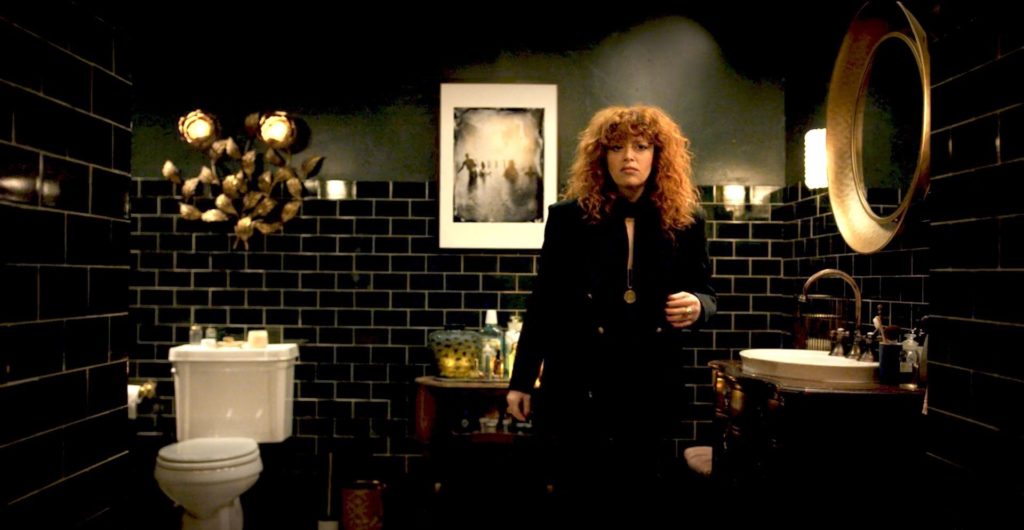 Explaining what that twist entails is where I draw the line. I know promotional material for the show has pulled back the curtain on the specific event, but I wasn’t expecting Russian Doll to deal with an almost multi-verse style story. That’s the most you’ll get from me because this is one of the few times I’ll say that spoilers really would dramatically hurt your perception of the show.

Like any thoughtfully crafted experience, learning the twist makes you question previous scenes and your entire understanding of what is going on. I even took to rewatching the first few episodes because I missed some now obvious foreshadowing. It doesn’t hurt that the direction and cinematography feel like a spiritual awakening, with brilliant use of colors, depth-of-field, and character placement. Everything looks deliberately placed and calculated to express specific themes.

I’m also incredibly partial to the dark sense of humor Russian Doll has. Most of the character’s Lyonne has played are snarky, foul-mouthed addicts, but it never ceases to bring a smile to your face when you hear her bad mouth someone. It’s also really twisted how the various death scenes are played up like a form of violent slapstick, with pulled back camera angles and intense close-ups used to accentuate the absurdity of the very concept of the show. You’re gonna be seeing Lyonne take a tumble time and time again, whether you want to or not. 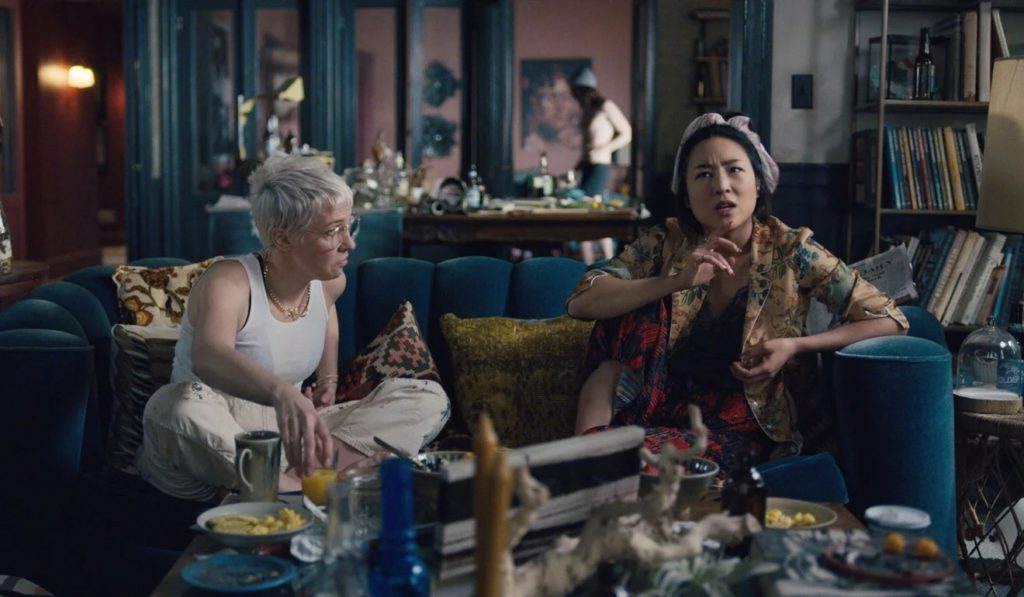 That comedy keeps things from feeling overly dramatic since the show does go to some pretty dark places in later episodes. Without the careful balance of comedy and drama the show strikes, Russian Doll might have come off as an edgier version of the Bill Murray classic. It thankfully never forgets that real life isn’t so black and white and revels in the chances it has to make the viewer chuckle.

One touch that I haven’t seen mentioned elsewhere is how Russian Doll takes some influence from video games. In her quest to discover the truth, Nadia almost crafts her own walkthrough of how to get through the night. She learns of some drug she took a hit from, discovers the name of the dealer, and even learns a secret password that allows her to skip right to the boss after dying a bunch. I began to think I was just projecting my own understanding of the world onto the show, but Nadia’s character is a software engineer that had previously worked on indie games. That can’t just be a coincidence.

One episode even gives us a look at her earlier work and it’s clear the show is trying to connect the dots between video game logic and this nightmare world that Nadia inhabits. Once she sees a pattern and learns to exploit it, Nadia is safe to kill herself and skip right to the good part. It doesn’t hurt that another major plot point is the disappearance of objects, almost as if it were a glitch in the system. I’m kind of getting ahead of myself, though, and I don’t want to set an expectation in anyone’s mind before they watch the show. 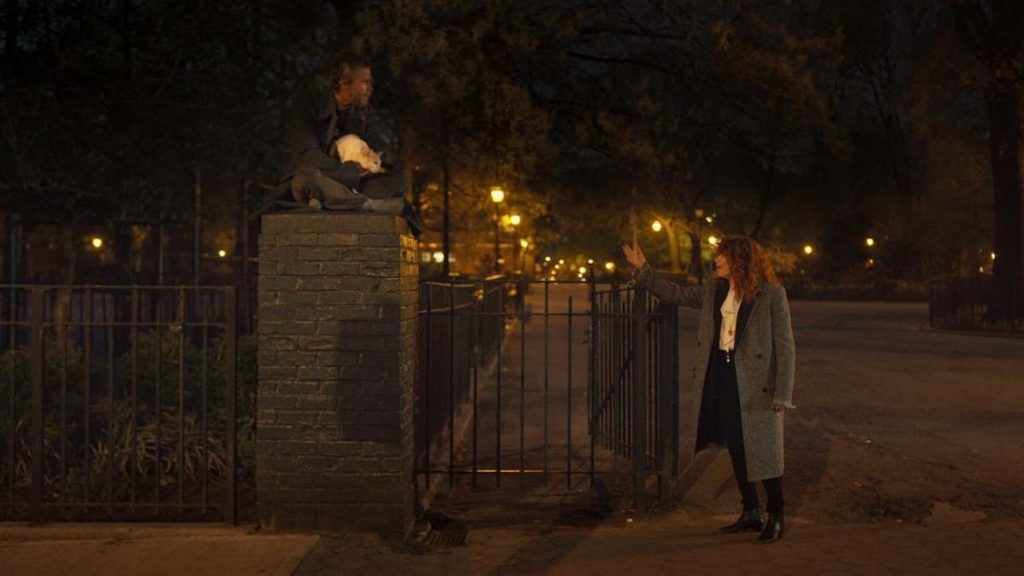 If you were on the fence about the concept or just plain had no clue what Russian Doll even was, I heartily recommend you give the series a chance. It doesn’t redefine what is possible from the Groundhog Day formula, but it does do more than a lot of the imitators have in the intervening years. This is a show that is smart, well-crafted and fiendishly addictive. Once you get sucked into the mystery of this world, you’re not likely to stop watching.

It does hurt a little that no definitive ending is present, but I suppose there needs to be some justification for a second season.