At the beginning of the pandemic, I joked with friends that coronavirus depression felt a lot like getting dumped. Think of that sense of isolation and ache for intimacy, all while putting on a veil of normalcy. You trot around with a brave face as if everything is fine, but it’s not hard for others to spot the emotional wreckage behind the facade. In normal circumstances, we could at least commiserate with friends and safely lose ourselves in public spaces. What makes this particular languor feel endless is that we’re forced to face it alone.

Pedro Almodovar’s beautifully strange The Human Voice notices that, too. This adaptation of a Jean Cocteau play is a portrait of common personal crises, but its production and presentation also considers the lonesome, anxious state of the world right now, longing for human connection and a return to normal.

In its opening shots, The Human Voice presents a splendidly dressed Tilda Swinton looking forlorn and tousle-haired in a barren soundstage. This is where the 30-minute breakup film unfolds. Her lover’s left her, yet she holds out hope he’ll come back. She lays out his empty suit on their bed and sleeps beside it. Their dog (really more his dog, we learn) sniffs and paws at the threshold of the front door and some luggage. The bulk of the film is one side of a phone call, a monologue full of bargaining and naked desperation. The Human Voice is full of absence.

Swinton occupies a lushly decorated home that is characteristically Almodovar. The complementary furnishings, walls, and floors are feasts of color and texture. The same goes for Swinton’s perpetually dashing wardrobe. A briefly seen mannequin torso feels curated: the black wire construction is reminiscent of the linework in a Cocteau drawing. Yet this is all just a set, a facade, a brave (and stylish) face.

Almodovar’s overhead camera reveals the seams between each fabricated room. The confines of the soundstage are sometimes visible just beyond the chic green walls. Hell, some of the cabinets don’t even open. In one of the most memorable moments of artifice, Swinton wakes up to daylight streaming in through the soundstage door, which is far away from the set and her fake bedroom window. The natural order of the world has been refigured for Almodovar’s cinematic terrarium. 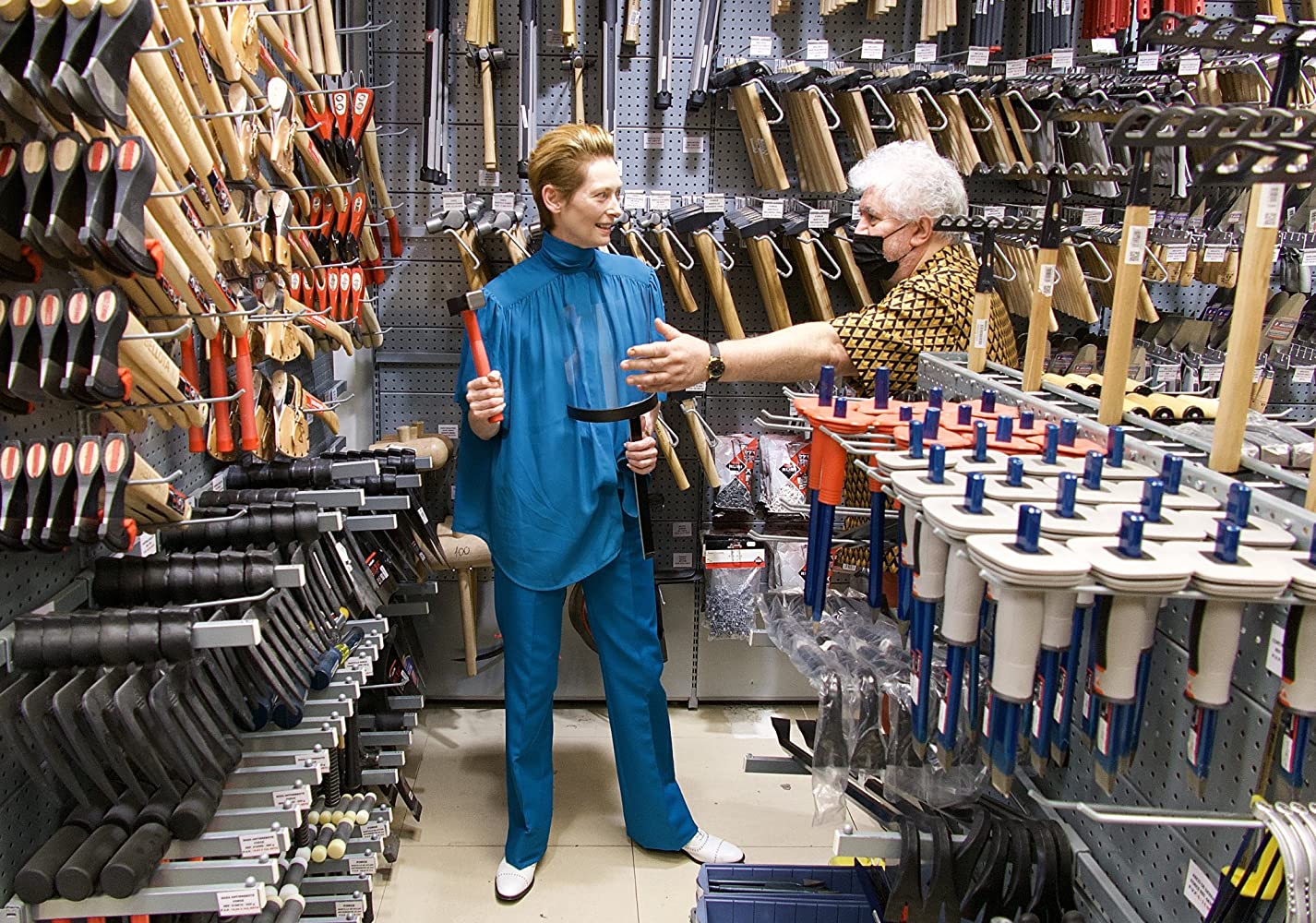 The Human Voice was conceived before COVID-19 but shot in July 2020 during the lockdown. Logistically, it made sense to shoot in a controlled environment for everyone’s safety. Behind-the-scenes photos depict a masked Almodovar directing as Swinton wields a masquerade-ready face shield on a stick. These practical decisions for production heighten the surreal isolation of the film. When Swinton saunters around the walls to reveal the set’s facade, she’s still confined in the soundstage. It’s a cavernous space at least, for whatever that’s worth, but its barrenness calls even greater attention to the absence of other people.

Early on in The Human Voice, Swinton enters a hardware store. She looks so composed. Everyone is maskless, but they’re kept several feet apart by aisles and queues. Items are arranged so attractively in this hyper-real version of the world that it verges on Cocteau’s outright surrealism. The hatchet, for instance, is wrapped in brown paper packaging, folded and taped like a pair of silk opera gloves. The store clerk seems to notice something off about Swinton’s heightened normalcy. Maybe I’m projecting or misreading simple customer service, but I sensed in this brief exchange both a person hiding their inner hurt and another realizing they cannot comfort a stranger in turmoil. How many times have we felt this sensation more intensely in the last several months? Even the last week? This moment of empathetic recognition is one of the few human interactions on camera. Even with a heightened reality, The Human Voice never denies its essential humanity.

I wonder how The Human Voice might seem to viewers 25 years from now, separated from the current feelings and realities of the pandemic. Pondering this might be my way of fantasizing about the future, about a carefree life outside our doors. I want to say it will feel incredible to be human again, but that’s inaccurate. We never stop. We’re always human, especially when we’re alone. 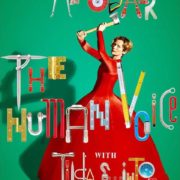 Definitely check this one out. It is highly recommended.
8.3

Pedro Almodovar's The Human Voice merges the emotional turmoil of a breakup with the isolation of the pandemic. Tilda Swinton's presence enhances the sumptuous portrait of personal crises and the current global lockdown.