0
Back in the habit

More than 30 years after Akeem’s trip to the Big Apple, Coming 2 America hits with a new trailer for Amazon Prime Video’s royal sequel. Eddie Murphy is, of course, back in the royal role of Akeem Joffer, now King of Zamunda, accompanied by his trusted advisor Semmi (Arsenio Hall) as the two travel to the US to track down Akeem’s heir to the throne.

Coming 2 America (which is bound to spark the sort of conversations or lines like, “Hey want to watch Coming to America? The new one.”) had something of a bumpy release ahead of this Amazon acquisition, originally intended to land smack-dab in the middle of a burgeoning global pandemic. Originally a Paramount release, now set to stream, Coming 2 America hits Amazon Prime Video March 5, 2021. In the interim, take a peek at the newly released poster ahead of the streaming premiere. 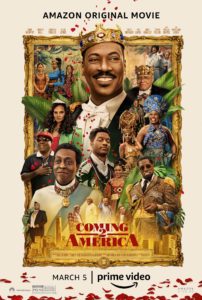