0
What a hell of a title.
[Welcome to Peter’s Kung Fu Corner: a monthly column dedicated to retrospectives on the martial arts films I grew up watching. We’ll be covering all kinds of Hong Kong action films from Bruce Lee all the way to Joseph Kuo. Get ready to be introduced to some weird, wacky, and utterly badass films.]

Take just one look at the title of this movie and you’ll likely understand why I chose it this month. With the coronavirus pandemic showing no signs of slowing down, I thought I’d bring some cheer to your lives by featuring Dirty Ho on Flixist. I also wanted to write an article where I can repeatedly type Dirty Ho and it not be some weird sex thing. What an unfortunate name for a film.

Silly name aside, the 1979 Shaw Brothers classic is, surprisingly, not some teenage sex-fueled Kung Fu comedy. It’s actually the film that established actor Gordon Liu as quite the comedic force to be reckoned with. Along with that, it’s one of the few Shaw Brothers movies to not feature a revenge-driven plotline, something that had become so commonplace at the studio during the 70s that you could blindly throw a dart at any film and hit one.

Having not watched this too many times in my youth, I’ve never been as familiar with it as other classics. Every other film I’ve written about for this column is something I could recall explicit scenes from. Dirty Ho, on the other hand, I remember laughing about in high school. People would ask what I watched the other night and the punchline basically writes itself. Ah, to be a dumb teenager again.

If you look up the Wikipedia description, it will actually completely spoil the twist of Dirty Ho in seconds. Just watching it with no foreknowledge, you might be just as lost as its titular character, played by Wong Yue. “Dirty” Ho is a jewelry thief and he happens to get into something of a tussle with Mr. Wang (Gordon Liu). The two are fighting for the attention of some courtesans at a brothel and Wang happens to outwit Ho. After causing a small scene, Wang reveals his secret identity to the guards and gets Ho ejected from the building, stealing his jewelry in the process.

The next day, Ho is on the hunt for Wang to reclaim his stolen jewels. When he stumbles upon Wang in the city, he’s again outwitted and seemingly outclassed by Wang in a “fight.” Still not deterred, Ho visits Wang again at night under the guise of being a ninja, but Wang conceals his secret Kung Fu prowess in a rather hilarious battle that involves calling one of the courtesans (played by Kara Hui) his bodyguard, then using her to battle Ho. It’s like an Abbot and Costello routine, just with a lot more punching and kicking.

If you couldn’t tell already, Dirty Ho is a comedy. There’s obviously a plot stringing things together, but the main idea is rather confusing. About 40 minutes in, I still wasn’t exactly sure what the hell was going on until the big twist came in the middle. That’s why I’m surprised Wikipedia just spoils everything, but I’ll give you readers fair warning. While certainly clumsy in the beginning, Dirty Ho is absolutely a Kung Fu comedy classic. Just go watch it. If you’ve already seen the film, you can continue reading past this point. 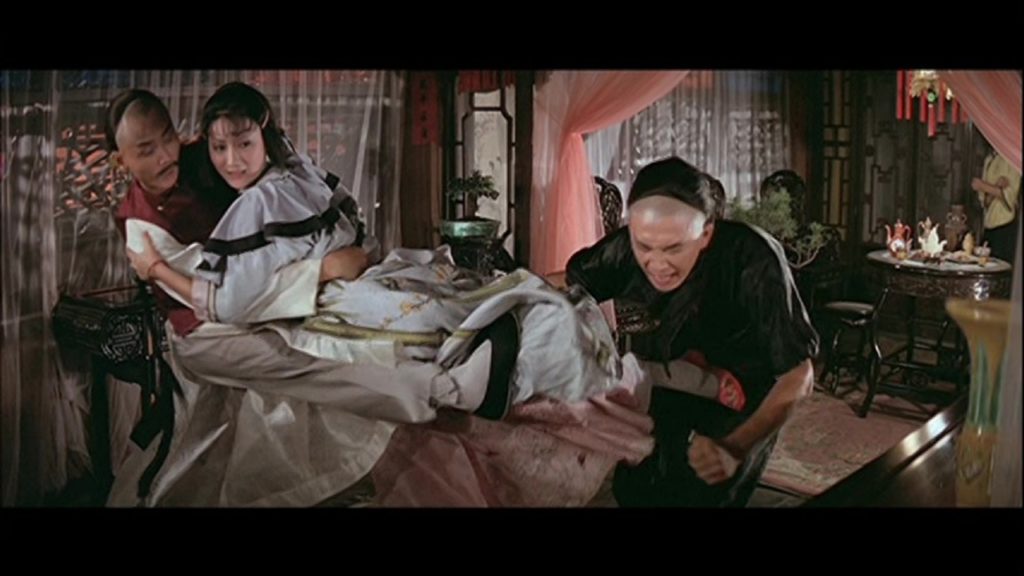 Okay, with that said, the main twist is that Mr. Wang is actually a Manchurian prince that is next in line for the throne. At the beginning of the film, Wang disguises his Kung Fu in an attempt to weed out assassins that are trying to kill him. He hasn’t quite figured out who wants him dead, but then he happens to run into Ho. Noticing that Ho has a lot of gumption, he concocts a plan to trick him into becoming his student.

Wang also quickly realizes that Ho is something of a legendary jewelry thief. When the guards start asking where these stolen jewels came from, Wang covers for Ho and then returns the jewels to their rightful owners. He consistently keeps the authorities out of Ho’s path, with Ho being none the wiser. He also does it while looking like a total fool, which confuses Ho.

Brilliantly, Dirty Ho doesn’t let this on at all. Much like Ho, the viewers are kind of lost at why Wang is so “inept.” Unlike Ho, we’re given the benefit of seeing these hidden Kung Fu battles in full display, so it’s clear something is going on. Oblivious to the world, Ho is often looking away or dealing with his own nonsense while Wang is battling foes under the guise of drinking wine or checking out antiques. It’s so ridiculously over the top and physical that you can’t help but laugh in amazement. 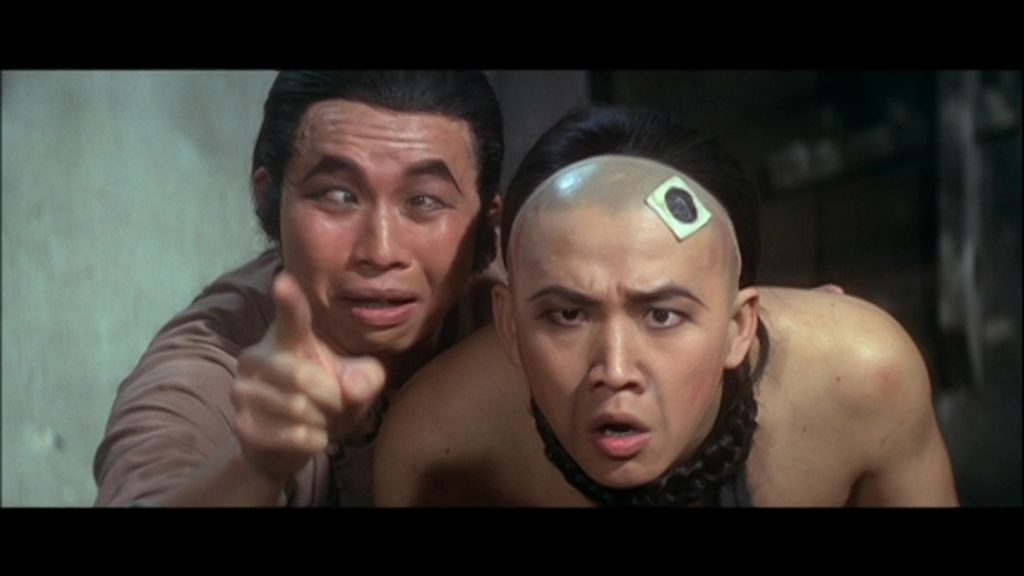 How Ho discovers all of this is during a visit to the antique shop. Waiting outside for Wang to be finished, he hears some yelling from the other room. When he rounds the corner, Wang is whooping some serious ass and Ho is stunned. Suddenly, the tides begin to turn and Ho jumps in for the rescue. Wang gets injured, but now Ho realizes what is going on. The same can be said for the viewers, as Wang reveals his entire plan.

With that, the back half of the film sort of turns into the typical collection of training montages and fight scenes, but it’s got such a brisk pace and a wonderfully lighthearted attitude that you can’t help but laugh. There are definitely some bits that maybe haven’t aged well, like a battle where Ho deals with thieves pretending to be handicapped and even some weird montage of an effeminate man pretending to be a woman and emasculating Ho, but nothing feels malicious in intent. I don’t think the idea was to poke fun at different people, but note that Ho is a different breed of criminal than the others.

I also came to a new realization of how The Prodigal Son, possibly my favorite Kung Fu film and a movie I wrote about a few months back, may have been directly inspired by Dirty Ho. There’s a similar bonding between the main characters in both movies, with Leung Jan and Leung Yee Tai (in The Prodigal Son) being mirrors of Ho and Wang respectively. There’s also the slapstick, wacky comedy juxtaposed against sometimes violent imagery. 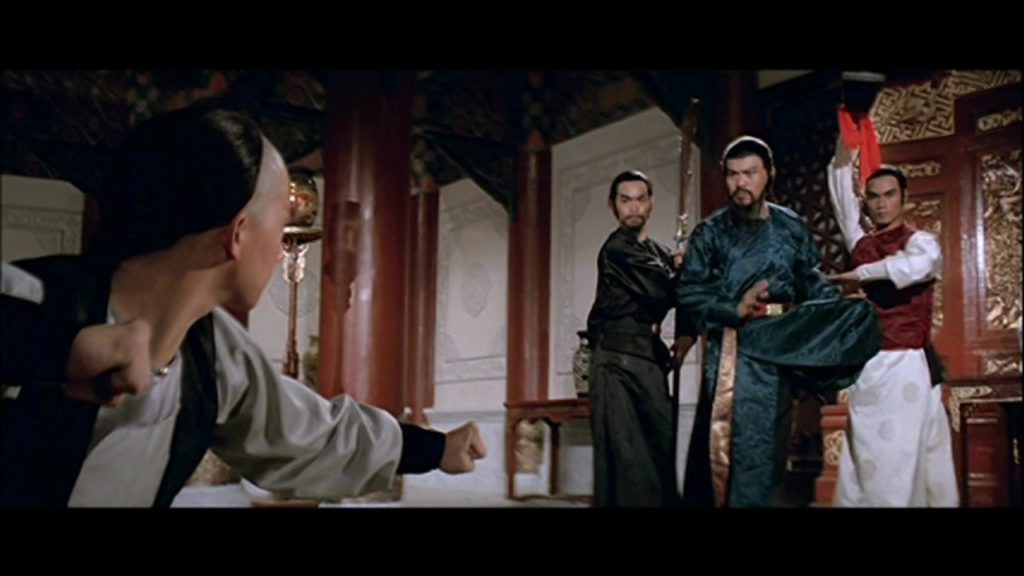 Dirty Ho certainly gets way more bizarre than The Prodigal Son, but director Lau Kar-Leung really laid the foundation for an entire decade of Kung Fu comedies to come. Bruce Lee may have been the first to try and mix martial arts with comedy in Way of the Dragon and Jackie Chan may have popularized the idea just a year earlier with Drunken Master, but Dirty Ho perfected it.

What’s really amazing is just how damn well it holds up. Yeah, there’s confusing plotting at the start and descriptions make it sound needlessly complicated, but I can’t emphasize how swift the pacing really is. At only 97 minutes long, Dirty Ho doesn’t beat around the bush. It only takes roughly two minutes for the jokes to start coming and then another few for the first fight to happen. With no slowing down, you might even get whiplash watching this.

So as silly as its name might be (which is something I’ll never tire of saying), Dirty Ho truly is a must-watch if you’re curious about the genre. Being a Shaw Brothers production, it also features the lavish set design, large cast of extras, and excellent direction that you can expect from that studio. This column may have read more like a review, but that’s because even I’m surprised at how well Dirty Ho has held up to my memory.